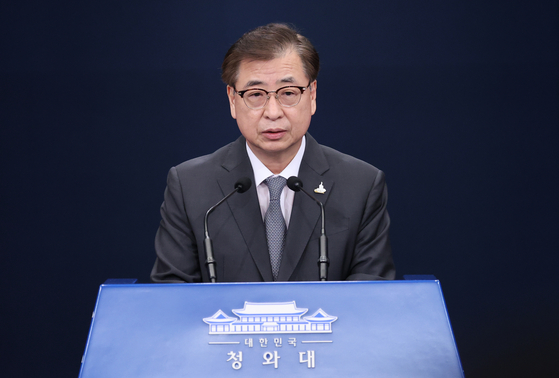 Suh Hoon, South Korea’s director of the National Security Office in the Blue House, relays North Korea’s message about its recent killing of a South Korean official at a press briefing Friday. [YONHAP]

North Korean leader Kim Jong-un was quoted by Pyongyang’s inter-Korean agency Friday as saying he was “immensely sorry” for the “unexpected” killing of a South Korean fisheries official earlier this week.

Suh Hoon, South Korea’s director of the National Security Office in the Blue House, relayed the remarks to local reporters during a press briefing Friday, saying it was part of a message Seoul received earlier that day from the United Front Department, an organ in the North’s ruling Workers’ Party that deals with South-North ties.

Exactly how Seoul received the North Korean statement was unexplained.

It was the first time North Korea has ever spoken out about the incident, after South Korean military officials and President Moon Jae-in pressed the regime to offer an explanation.

South Korea’s military said Thursday they had intelligence indicating the South Korean official was killed and burned by the North at around 9:40 p.m. Tuesday after crossing the inter-Korean maritime border in the Yellow Sea, known in the South as the Northern Limit Line (NLL).

The South Korean official has been identified as a 47-year-old who worked for the Ministry of Oceans and Fisheries’ West Sea Fisheries Management Service.

In Friday’s message, the North said the South Korean official was “suspected” to have been fatally shot by North Korean soldiers after he was found in North Korean waters by fishermen, who reported the man to the North Korean military.

But the North denied that his body was burned.

North Korean soldiers were said to have fired around 10 shots “toward the illegal intruder” from 40 to 50 meters (131 to 164 feet) away in the sea after the South Korean refused to follow orders from them and at one point “hunkered down” on top of the “floating material” he was on, “acting as if he was about to wear something over his body.”

“Many bloodstains” were said to have been found on the floating material. North Korean soldiers assumed he was dead and burned the material on nearby land, the message continued, without offering any further details about the body.

The North expressed “grave regret” toward the South Korean military for “groundlessly” accusing the North of brutality, but said it was “sorry” that such an unfortunate incident had happened in its waters.

Towards the end of the message, North Korean leader Kim, in a rare sign of contrition, was quoted as saying he was immensely sorry to President Moon and the South and North Korean people for “disappointing” them with the unexpected and unfortunate incident.

South Korea’s National Intelligence Service said later Friday that Kim appeared not to have given the order to fatally shoot the South Korean official.

Moon was said to have sent a letter to Kim on Sept. 8, to which Kim responded four days later. How the letters were exchanged was not revealed.

According to Suh, Moon told Kim that both Koreas were going through tough times this year due to the coronavirus pandemic, torrential rains and typhoons, and that he was rooting for the North to overcome the obstacles.

“Collapsed houses can be rebuilt, disconnected bridges can be reconnected and fallen rice plants can be set upright again, but people’s lives are an absolute value that cannot be restored and cannot be traded with anything else,” Moon said, adding it was pertinent to “protect the lives and safety of our 80 million people.”

Kim was quoted by Suh as responding he felt “brotherly love” from Moon’s consoling letter, and that he, too, would use “this opportunity to show unpretentious sincerity” to Moon and the South Korean people.