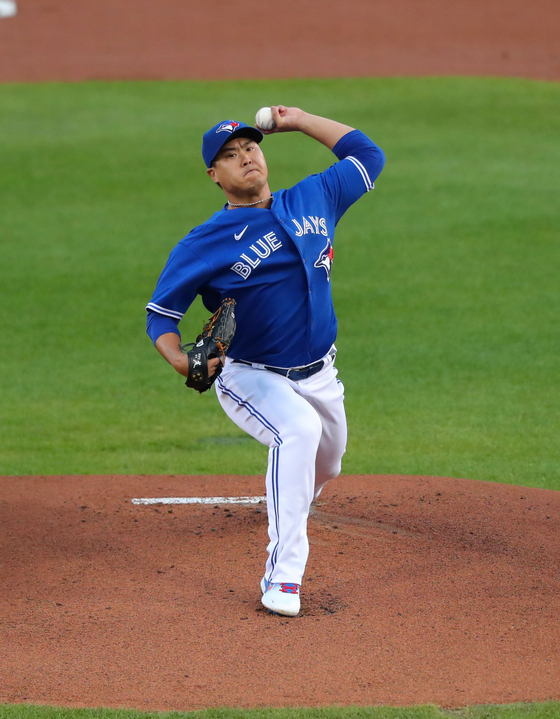 Ryu Hyun-jin of the Toronto Blue Jays throws a pitch during a game against the New York Yankees at Sahlen Field in Buffalo, New York on Thursday. [GETTY IMAGES/YONHAP]


For the first time in 15 years, two Korean major league pitchers have picked up wins on the same day.

Appearing on the mound simultaneously for the fourth and final time this season, Ryu Hyun-jin of the Toronto Blue Jays and Kim Kwang-hyun of the St. Louis Cardinals both picked up wins to finish their seasons on a high note on Thursday.

The two have been locked into the same rotation for more than a month now, but have never both managed to walk away with a win on the same day, until Thursday. The dual win follows in the footsteps of former major leaguers Park Chan-ho and Seo Jae-weong, the only pair of Korean pitchers to pick up wins on the same day back in 2005.


Ryu was first to secure his victory. Pitching against the New York Yankees at Sahlen Field in Buffalo, New York, there were some concerns about how well he'd do as the 33-year-old has never really had a “good game” against the Yankees.

But on Thursday, it seemed as if Ryu was saving the best for last.

Ryu tossed seven scoreless innings against the Yankees to pick up his fifth win of the season and to help the Blue Jays advance to the postseason in the Wild Card slot.

Throughout seven innings, Ryu gave up five hits and two walks while striking out four. Seven innings is the most Ryu has pitched this season for the Blue Jays.

Once again, Ryu was well supported from the start of the game as the young Blue Jays scored a run in the second and third innings. The young squad added two more at the bottom of the sixth to carry that lead late into the game.

Ryu left the mound when the Blue Jays had a 4-0 lead. The bullpen continued their strong performance as they only allowed one run to the Yankees at the top of the eighth inning to pick up a 4-1 victory.

With another win, Ryu finished his shortened 60-game season with five wins and two losses with a 2.69 ERA.

Ryu's performance allowed the Blue Jays to clinch a Wild Card playoff spot, securing a postseason berth for the first time since 2016.

"This is what I expected when I signed with the Blue Jays," Ryu was quoted as saying on the Blue Jays website. "Even last year, with this young core group of guys and talent, I knew it would translate to this year as well. During Spring Training, I was able to witness their talent with my own two eyes, so I knew going to the postseason was a possibility. I like winning, and I came here to win."

Ryu is expected to start in the first game of the Wild Card series, once they finish their season with a game against the Baltimore Orioles on Sunday.

Ryu's first season with the Blue Jays has been a success, cementing his role as the club's ace pitcher. The final game, overcoming his old nemesis the Yankees, likely feels like the perfect way to cap off another strong season.


Before Thursday’s game, Ryu has faced the Yankees three times throughout his career and has struggled in all three games, picking up two losses and a no decision.

Thursday's seven scoreless innings has hopefully shut the door on that period in Ryu's pitching history. 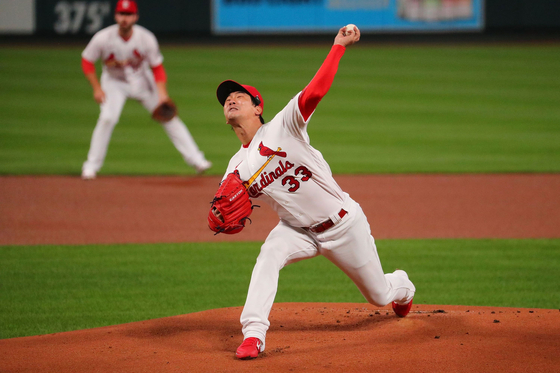 Kim Kwang-hyun of the St.Louis Cardinals throws a pitch during a game against the Milwaukee Brewers at Busch Stadium in St. Louis on Thursday. [GETTY IMAGES/YONHAP]


Hours after Ryu’s victory, Kim also had another solid start for the Cardinals.

Pitching against the Milwaukee Brewers for his last game of the regular season, Kim got off to a strong start by tossing three scoreless innings.

The Cardinals were the first to take the lead by scoring a run at the bottom of the third but Kim gave up a run at the top of the fourth to tie the score.

The Cardinals fought back, wasting no time taking back the lead by adding two more runs at the bottom of the fourth. Thanks to the Cardinals’ batting lineup, Kim was given another shot at picking up his third win of the season.

And he made sure to do so.

By tossing a scoreless fifth inning, Kim left the mound with the Cardinals up 3-1. The bullpen continued the scoreless streak against the Brewers until the very last inning. Heading into the top of the ninth with the Cardinals holding a 4-1 lead, they faced their first serious struggle of the game.

Right when they thought the game was almost done, Cardinals pitcher Alex Reyes found himself with runners on first and second with only one out. The Cardinals lifted Reyes and substituted pitcher Andrew Miller, hoping to finish the game, but it took longer than expected.

Miller allowed a single to pinch hitter Eric Sogard to allow the Brewers to add a run. However, Miller quickly regrouped and struck out center fielder Avisali Garcia. Ending the game on a high, Miller struck out Brewer's All-Star Christian Yelich to end the inning.


With the victory, Kim was also able to secure his third win of the season. By giving up five hits, one run and two walks, while striking out three throughout five innings, Kim successfully picked up another win and will end the regular season with a 1.59 ERA.

Kim’s rookie season in the major league has been impressive. He started out in the bullpen and cemented his position as a starter mid-way through the season. Kim earned his shot as a starter after a number of Cardinals players tested positive for the coronavirus.

Although Kim briefly left the roster due to a kidney ailment, that didn’t affect his performance as he quickly made his return and rounded off the season with solid performances despite ongoing medical treatment and the need to wear additional uncomfortable protective gear.

Kim ends his rookie season with three wins, no losses and an ERA of 1.62.