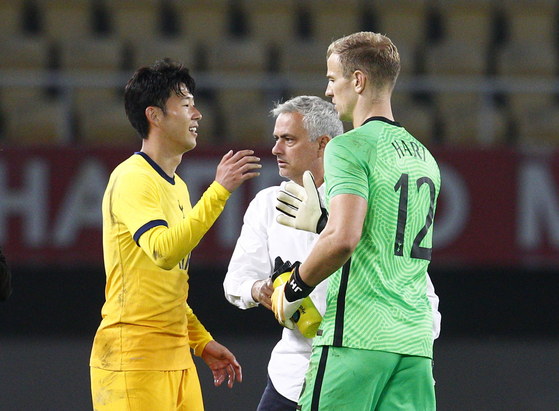 Son Heung-min of Tottenham Hotspur, left, celebrates with his Joe Hart and head coach Jose Mourinho after scoring the club's second goal of the match against Shkenjija during the third-round qualifying match at the UEFA Europa League at National Arena Todor Proeski in Skopje, North Macedonia on Thursday. [REUTERS/YONHAP]


Son Heung-min of Tottenham Hotspur is on a roll.

After scoring four goals in an already legendary appearance in the English Premier League last week, Son was back at it during Spurs’ third-round qualifying match against Shkendija in the UEFA Europa League at National Arena Todor Proeski in Skopje, North Macedonia on Thursday, netting one and picking up two assists in a 3-1 victory.

Spurs got off to a strong start with Erik Lamela opening the scoring just five minutes into the match, assisted by Son. Finishing the first half of the match with Spurs up 1-0, Shkendija quickly responded in the second half as Valmir Nafiu scored an equalizer in the 55th minute.

“After their goal, we had to react,” Spurs head coach Jose Mourinho was quoted as saying on the club's website. “I reacted on the bench, the players reacted on the pitch and we scored two goals to win it.”

With the score tied, it was once again Son who broke the silence as he scored in the 70th minute. Then, just nine minutes later, Harry Kane cemented Spurs victory with the club’s third goal of the match, assisted by Son.

“It was a job done,” Mourinho was quoted as saying. “That’s the most important thing. Job done, no extra time, no extra 30 minutes that we don’t need and no injuries. It’s about that.”

The 2020-21 season may have just kicked off but Son seems to be off to the best start of his career, as he’s scored five goals in just the past two matches.

The Southampton game was the very first time that Son has scored a hat-trick in a Premier League match and four goals allowed him to become the first-ever Korean footballer to achieve such a feat in the Premier League.

Although a bit less dramatic when it comes to scoring, Thursday’s match still proved Son’s worth on the pitch, as he was involved in all three goals.

With the assist for Kane's goal, the duo once again showed off their unrivalled chemistry. In the match against Southampton, Kane assisted all four of Son’s goals.

The two players’ teamwork has proven to be the best in the Premier League. Since August 2015, when Son joined Spurs, the two have teamed up on 24 Premier League goals, more than any other duo in the league over the same time period.

With Spurs’ 3-1 victory, they will now be advancing to the Europa League playoff, where they’ll be facing Israeli football club Maccabi Haifa.

“It’s not a moment for great performances,” Mourinho was quoted as saying. “The Bulgarian game or this one, no, it’s job done and now one less match, finally at home, to get into the group phase.”

Before Spurs return to the UEFA Europa League, the team will continue their season with a Premier League match against Newcastle at Tottenham Hotspur Stadium on Sept. 27.

In the Premier League standing this season, Spurs are ranked sixth with a win and a loss, totalling three points.