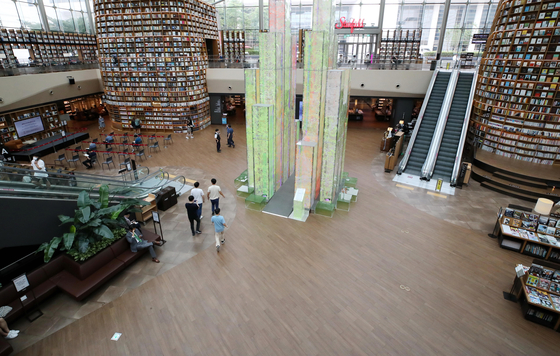 A pending revision to the retail law to help traditional markets is causing panic among merchants at malls.

A total of 12 bills to revise the Distribution Industry Development Act are pending at the National Assembly. One of them would force malls and department stores to close during the Chuseok holidays and at least two Sundays per month.

Currently, only big supermarket chains such as Emart are subject to the mandatory closure. The government plans to add malls and department stores to the list.

Due to their names, it's easy to regard these operations as big businesses. But more than 60 percent of Starfield Hanam and Lotte World Mall's stores are small individual brands who can't afford to lose weekend customers.

At Lotte Mall’s Suji branch in Yongin, Gyeonggi, more than 70 percent of all the stores are owned by small- and medium-sized companies.

Merchants complain that tighter regulations couldn't come at a worse time. The coronavirus has already made business difficult. Mr. Kim’s store, for example, saw monthly revenue drop to 60 million won ($51,000) after the pandemic — a huge drop from the monthly average of 100 million won before Covid-19.

“Closing the store on Sunday alone will cut sales by 30 to 40 percent,” Kim said. “If the bill passes the National Assembly, I'll have no choice but to lay off all employees except one. This will surely not be good for employment."

Another businessman who runs hair salons at the Starfield Hanam, Central City Seoul in southern Seoul and a department store in Daegu, is considering shutting down his stores completely as a result of the government’s plan. His salons have been in the red since March.

Sundays account for 18 percent of his revenues. People who want relatively expensive beauty procedures such as perms or dye jobs usually visit over the weekend.

In hair salons, owners hire employees as regular workers and train them for two or three years. According to the owner, the monthly wage of a worker was only about 1.25 million won five years ago when he started his business, but rose to 1.79 million won this year due to rises in the minimum wage — a 43 percent increase.

“If sales drop, the first thing I consider is firing regular workers,” he said. “We pay tax; we work overnight to keep our business afloat. But who cares about individual business owners like us?

Retail companies are also in a panic. E-commerce operators have been growing at a rapid speed. Brick-and-mortar operations have been struggling after Covid-19 spread.

“Mandatory closures are unreasonable because shopping malls today are more like a place for leisure than shopping,” an anonymous source from one of the shopping complexes said. “The government should come up with a measure that can protect the business owners in traditional markets and in shopping malls at the same time, like forcing days off on week days instead of weekends.”