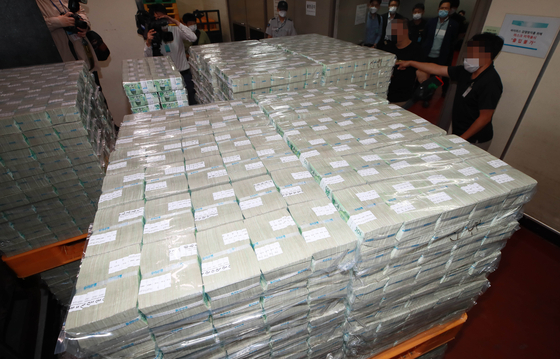 Workers from the note-issuing bureau of the Bank of Korea in Gangnam District, southern Seoul, on Thursday unload brand-new bank notes to be circulated in commercial banks for the coming Chuseok harvest holidays. [JOINT PRESS CORPS]

The Covid-19 pandemic triggered a craze for contactless payments — one way of avoiding infection.

But that didn't mean that cash was being scorned. In fact, a Bank of Korea (BOK) report on Sunday showed that the coronavirus reminded many people in Korea, the United States and Europe that "cash is king" in times of trouble — and hoarding of cash rose.

That means that for every 10 units of 50,000-won notes issued by the central bank, only two returned to the bank — and eight were kept by either households, in mattresses or cookie jars, or financial institutions, in vaults.

“With the spread of Covid-19 and lockdowns of countries, people’s desire to have cash in their pockets rose as they worried that their access to money might be restricted,” the bank said.

“Financial institutions also scrambled to secure cash in order to meet demand for exchange of currencies and payments as the pandemic triggered unstable supplies of cash.”

The trend was also apparent in other countries including the United States, Japan and European Union member states.

In the United States, the growth rate of its currency in circulation averaged 13 percent between March and August this year, an 8 percentage point jump compared to the same period last year when the figure stood at 5 percent.

In the European Union, the growth rate of currency in circulation averaged 9 percent during the March to July period  compared to 5 percent a year earlier.

Japan's figure was 6 percent in July and August compared to 3 percent during the same period a year earlier.
“Economic players prefer cash as a way of securing safe assets,” the bank said.