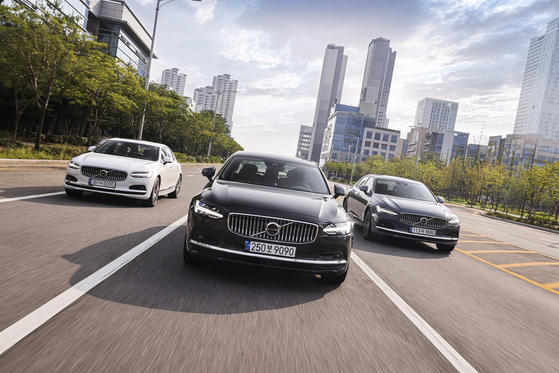 
Volvo is hoping to follow the success of brand ambassador Son Heung-min, who recently became the 28th player in English Premier League history to score four goals in a single match, with the release of its partially revamped S90 sedan.

The Tottenham Hotspur star isn't just the Swedish automaker's brand ambassador, but also the model for the new S90, which has been newly released with a facelifted version for the first time in four years. Volvo Cars Korea is hoping the new sedan will change the paradigm in the country’s import car market, where non-German or non-Japanese cars haven't been very successful.

This is first time that Son has served as brand ambassador for an automotive company.

“Just like Son is showing leadership in his field, Volvo wanted to show a similar presence in the E-segment with the new S90,” the company explained. 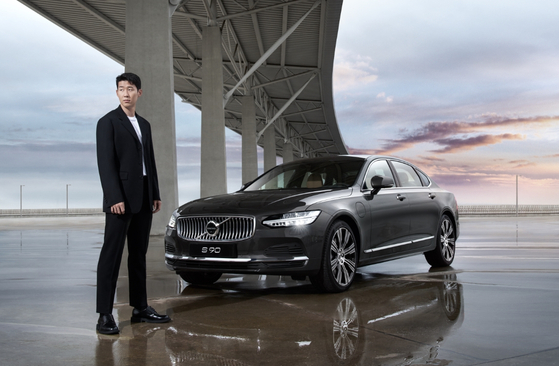 
To see if the car is really that "Sonsational," the Korea JoongAng Daily got behind the wheel of the B5 Inscription trim of the S90 topped with a 48-volt mild hybrid powertrain for a 100-kilometer (62-mile) round trip from Yeouido in western Seoul to Incheon.

Before hitting the road, this reporter climbed into the second row to check out the rear passenger experience.

The experience was surprising. The S90 offers a genuinely shocking amount of legroom in the rear, taking advantage of a 125-millimeter (5-inch) extension to the body length — now totaling 5,090 millimeters. Its wheelbase has also been extended 120 millimeters to help the back seat become more spacious.

Once on the road, the sedan was able to pull off its signature smooth and quiet acceleration and stable handling. The new S90, like most of Volvo lineup, is not the best car for dynamic driving, lacking the quick acceleration and agile handling at high speeds.

There was also noticeable rumbling when the car reached speeds over 110 kilometers per hour.

But if you're not looking for thrills, the S90 is one of the best cars to drive around the city, getting you from A to B in comfort. And safely, which has always been a priority for Volvo.


In line with that logic, it installed its own safety package called City Safety in all trims. The package includes an automatic brake system and collision avoidance system that helps drivers from crashing into other vehicles, objects and people. The car is also able to brake on its own, keeping a preset distance from the car in front. Up to speeds of 140 kilometers per hour, the car is able to navigate on its own on roads under the Pilot Assist 2 program.

The pilot assist system, once activated, helped this reporter to relax a bit on the highway, driving on its own at a speed of 100 kilometers per hour. It was able to navigate a winding road and control the distance with the car in front while staying in the middle of the lane.

But the system is still routed in safety protocol — if the driver's hands leave the steering wheel for more than 10 seconds, a warning appears on the head-up display. 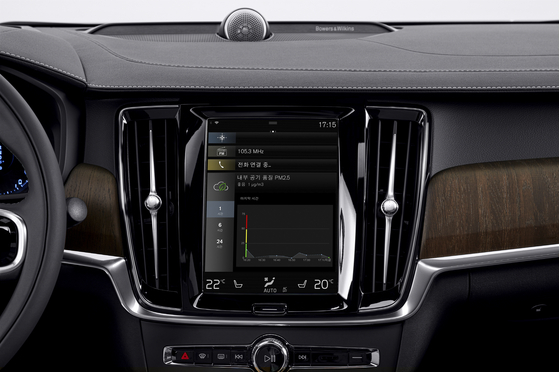 
The S90 also newly added what’s called an advanced air cleaner in all trims, which is able to sense the quality of the air and purify it if necessary. A digital monitor on the center console shows the air quality every 10 minutes.

For both the driver and the passenger, the new S90 couldn’t provide a more comfortable and safe ride.

It has a little bit of a competitive edge in price over its competitors, including Mercedes-Benz’s E-Class and BMW’s 5 Series, all of which have prices starting from 63 million won.

Volvo Cars Korea said that more than 3,200 reservations have already been placed for the model.

In response to the rising popularity of the brand here, the importer and distributor said it is in negotiation with the Swedish headquarters to expand the quantity from the current 1,000 to 3,000 units next year.