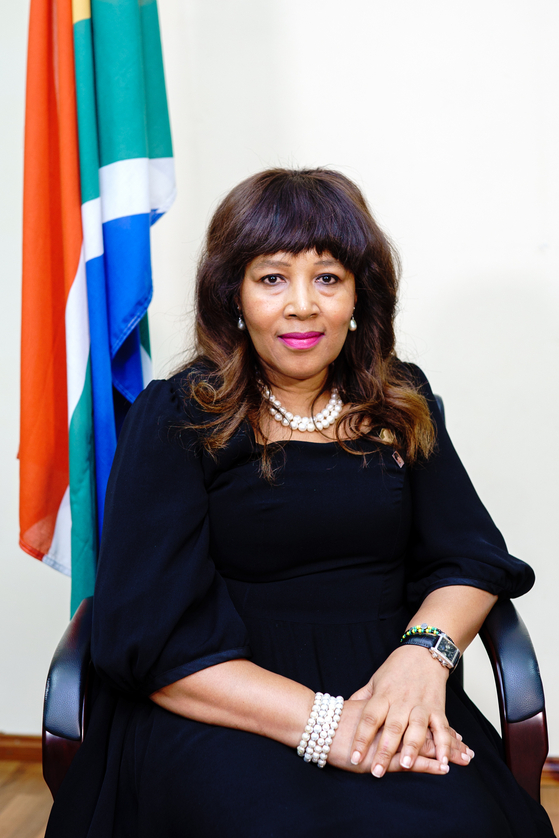 Lt. Piet Visser had a bird’s-eye view of Korea in 1952, arriving from South Africa to a land he remembers as populated mainly by rice paddies and thatched-roof houses.

“I never did any fighting on the ground, I was always in the air on the Mustang aircraft,” Visser said in an Aug. 3 phone interview. “We would be given the ground position of either the tanks or the bridges that the North Koreans and Chinese were using [...] and we would be dispatched to destroy them, always in groups of fours, and never less than four at a time.”

Visser was one of 826 South Africans who served in the Korean War (1950-1953). They served as part of the No. 2 Squadron of the South African Air Force, assigned with the U.S. Air Force’s 18th Fighter-Bomber Wing, flying a total of 12,067 sorties throughout the war, according to the South African Embassy in Korea. 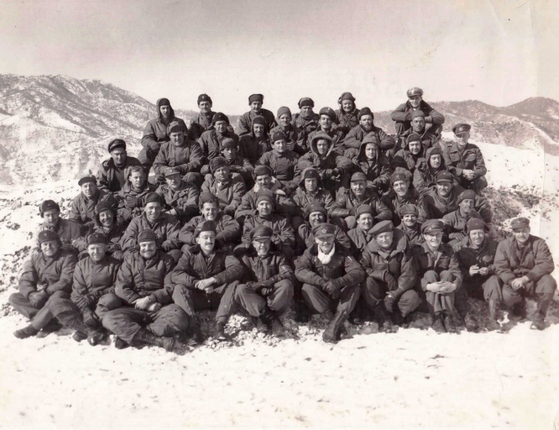 They provided much-needed relief for the United Nations forces on the ground, as was the case near the frontlines on May 4, 1951.

“I’ll forever recall with minute detail the most spectacular feat I’ve ever lived to witness and tell about,” American Private First Class J.P. Megnin recalled in a June 23, 1951 letter addressed to the “Flying Cheetahs” — a nickname given to the South African Air Force's No. 2 Squadron.

“We had gained the ridgeline of our objective, upon which we were catching all hell because of an overwhelming enemy counterattack,” he wrote. “The tide of battle was leaving casualties in its wake-like seashells cast upon a [beach's] sands [...] It was then we saw four silvery streaks plummet from the skies above with guns blazing.

“It was so wondrous a sight we completely forgot our whereabouts or line and just stood up in our foxholes and cheered,” Megnin continued. “I’ll never forget the astonishment on the men’s faces, nor their remarks of ‘those c-r-a-z-y bastards,’ as those four mighty F-51’s barely cleared the tree-tops. Our carelessness of standing and cheering from our foxholes was offset by the fact that every enemy was turned to rout. To us it was a miracle and blessing from above.” 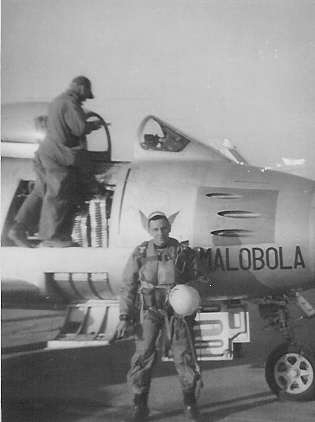 Lt. Piet Visser during his service in the Korean War (1950-1953). He is one of only five surviving South African Korean War veterans. [SOUTH AFRICAN KOREAN WAR VETERANS ASSOCIATION]

Temporary Captain Jan. A. Joubert, who led the operation, later received the Distinguished Flying Cross from the U.S. president.

Many of the South African fighter pilots were already decorated soldiers from World War II. Of the 826 in the No. 2 Squadron, 243 were Air Force officers, 545 were Air Force ground personnel and 38 were Army officers and others.

“It is estimated that 177 of the 243 officers who served in Korea had WWII experience,” Zenani N. Dlamini, ambassador of South Africa to Korea, wrote in a Sept. 14 email. “The majority of first pilots sent to Korea were highly decorated WWII fighter pilots."

The pilots provided crucial support in holding back the Chinese and North Korean offensives as the war raged on, especially in the spring of 1952, according to the Korean Ministry of Patriots and Veterans Affairs.

“In his prologue to the publication titled ‘The Eternal Partnership: South Africa and Korea — A History of the Participation of the South African Forces in the Korean War,’ [...] then-ROK Minister of Patriots and Veterans Affairs Park Sung-choon wrote that the squadron proved its worth in the spring of 1952 when they successfully blocked the Chinese Communist Army's general offensive at Imjin and the Han River and contributed to the lifting of the Koreans' morale by mounting their air-interdiction operations successfully in the enemy's rear,” wrote Dlamini. “During this period the enemy were subjected to repeated air attacks, despite low clouds with rain and snow storms.”

But the South African forces paid a heavy price as well. They lost 36 South Africans — 34 pilots and two ground crew members — during the war. Part of it had to do with their aircraft.

“The South Africans suffered heavy losses in aircraft over the period 1951 to 1952 due to enemy groundfire [both antiaircraft and small arms fire] while flying the propeller-driven North American F-51 Mustang,” Dlamini said. “The enemy aircraft, the Russian MiG-15 jet aircraft, was far superior to the propeller-driven Mustang as it was faster and could operate at a much higher altitude.”

Beginning in November 1950, the South Africans flew on F-51 Mustangs, until January 1953 when they started receiving the North American F-86 Sabre jets, according to the embassy. 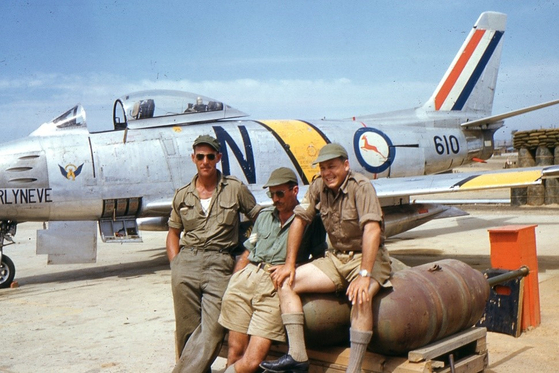 The transformation, Visser said, was phenomenal.

“The entire 18th Fighter-Bomber Wing was equipped with the latest jet aircraft that was available at that stage, and it was very much a safer situation for us because when you fly the modern jet, you can get to […] 30,000 feet above ground, where the enemy cannot reach you so easily,” Visser said.

And the pilots had another significant issue with the Mustangs, Visser recalled.

“The Mustang had one very dangerous problem,” he said. “It used glycol to cool the engine, so if they shot a small hole into the cooling system, you had about two minutes to bail out, because if you didn’t, your aircraft would catch alight.”

By the end of the war, 74 out of South Africa’s 97 Mustangs and four out of its 22 Sabres were lost, according to the embassy. Many of their pilots went missing when the planes were shot down.

War stories rarely lend themselves to feel-good moments. But one event did lift the spirits of many South Africans near the end of the war.

His father, Fred Gasson, came to Korea in May 1952 upon hearing the news at his own expense. He waited for news every day, hoping to learn whether they had found his son’s remains or, better yet, that he was captured and alive.

“He returned to South Africa empty-handed seven months later,” Ambassador Dlamini said. “[But] Mr. Gasson and his wife never gave up hope that their son was still alive, hope that was proven correct five months later when it was announced in April 1953 that their son was to be repatriated together with other prisoners of war. You can just imagine their reunion when 2nd Lt. Gasson arrived back in South Africa in May 1953.” 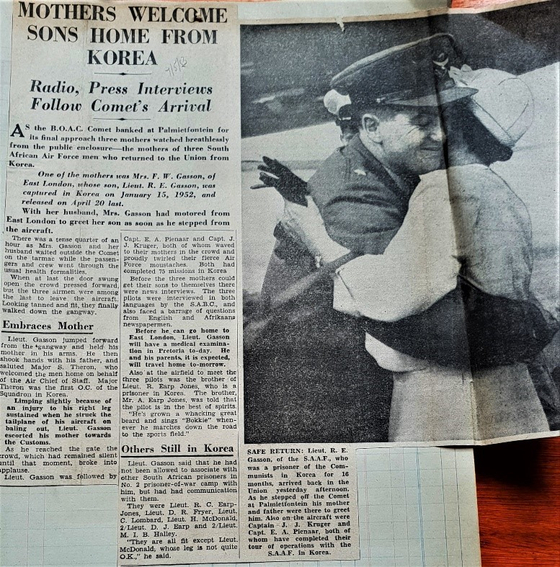 Of the 36 South Africans who lost their lives during the war, 11 are buried in the United Nations Military Cemetery in Korea in Busan, according to the embassy. The remains of the 25 others have not yet been found.

Their return is still hoped for at home, said Dirk Louw, president of the South African Korean War Veterans Association.

“During a monthly UN Command Ambassadors’ Roundtable meeting in 2019 [...] Director of the ROK Ministry of National Defense Agency for KIA Recovery and Identification [Makri] gave a presentation on the repatriation efforts undertaken to date,” Louw wrote in the association’s monthly newsletter in July.

“He indicated that these efforts have so far resulted in over 9,000 sets of remains being unearthed since the recovery project started in 2000, with only 116 having been identified. He noted that Makri believes that some of the unidentified remains are not American or Korean, but from other sending states and therefore encouraged sending states to have families of those fallen soldiers who have not been accounted for yet to submit DNA samples which can be used to identify remains.”

The first batch of DNA samples have been collected and were submitted earlier this year for testing, Louw said.

“Finding the remains of missing pilots will bring closure to those families who have lost a dear one in the war,” he added.

Louw is a retired South African colonel. When the war broke out in Korea, he was not yet born. But growing up, the country was a regular part of conversation in his household.

“My father often made an effort to show us his Korean colored slides on an old projector,” Louw wrote in a Sept. 15 email interview. “The slide’s images were not very clear and he always had to enhance the slides with colorful explanations. He was very fond of the Korean people.” 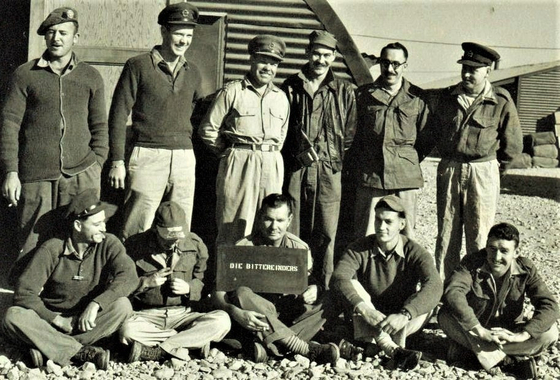 “The Afrikaans Word ‘Bitters Einders’ means those that have endured to the end,” Louw said.

Upon his return, Louw's father married Deleen Loubser in 1954. They had four sons, two of whom became career soldiers.

“As it is with young children, we did enjoy the slideshow but [never] really listened or understood his stories as this was something beyond our frame of reference at that time,” Dirk said. “The one thing that I could remember very clearly, was the effect that the fate of the orphans in Korea had on him. Every time he was talking about them he became very emotional and we did not understand why. Looking at the enhanced photographs I can understand.” 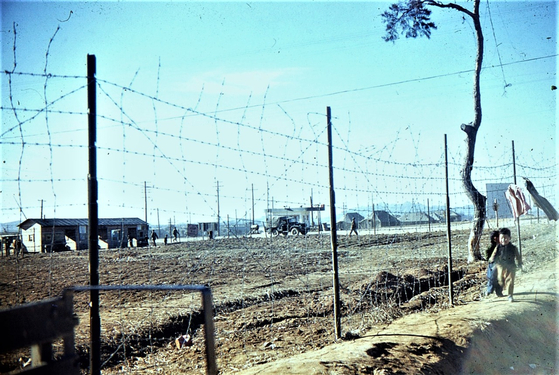 Korean orphans running along the fence of the K-55 air base, where South African forces were stationed, in a photo taken by Sgt. Louw. [SOUTH AFRICAN KOREAN WAR VETERANS ASSOCIATION]

“I did serve unknowingly with many of the Korean War veterans such as Lt. General Muller, Lt. General Earp, Brig. General Thom and many of the non-commissioned officers,” he said. 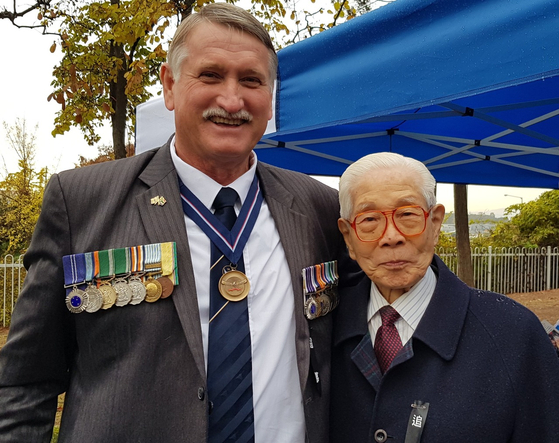 Dirk and his wife saw Korea for themselves years after the war, as had his father and mother.

“My father and mother were fortunate to visit Korea with the South African contingent in 1993,” he said. “My father told us upon his return that it can only be described as a miracle what happened in Korea after all these years. There was no trace of devastation he witnessed during the War. He and my mother could not express their gratitude enough for the way they were treated in Korea. They said that the friendliness and that gratitude of the Korean people were overwhelming.” 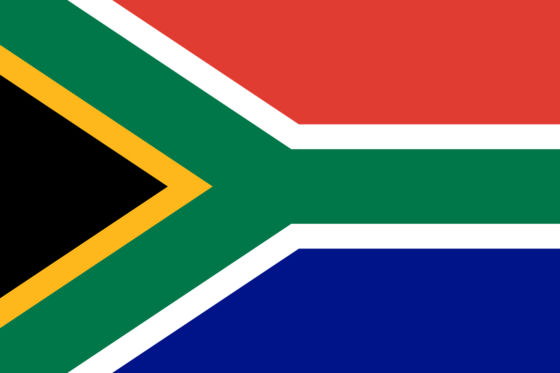 South Africa
A total of 826 South Africans served during the war, according to the UN Korean War Allies Association. Of them, 243 were Air Force officers, 545 were Air Force ground personnel and 38 were army officers and others. Altogether they made up the South African Air Force’s No. 2 Squadron, which served as part of the U.S. Air Force’s 18th Fighter-Bomber Wing. South Africa also deployed an Army and Medical Corps contingent, which served as part of the 1st Commonwealth Division.
A total of 36 South Africans (34 pilots and two ground crew members), made the ultimate sacrifice during the war. Among them, 11 are buried in the United Nations Memorial Cemetery in Korea (Unmck) in Busan. The remains of the rest have not been found. 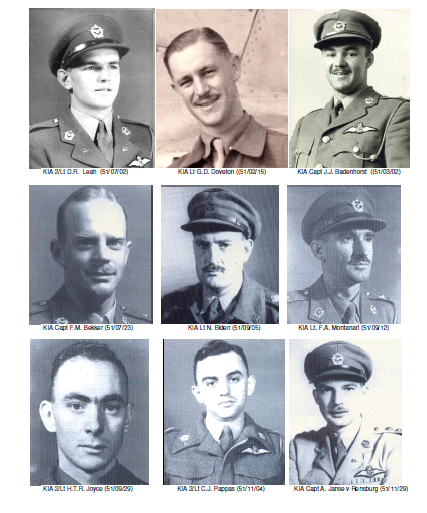 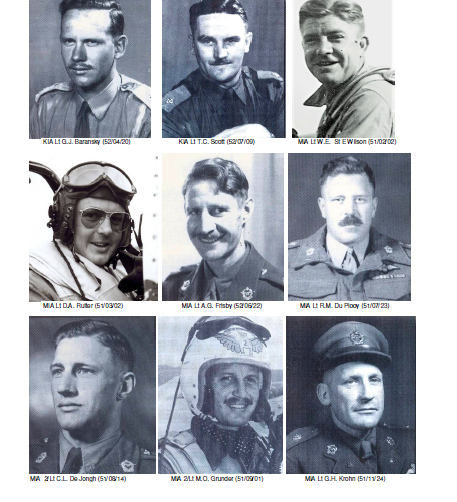 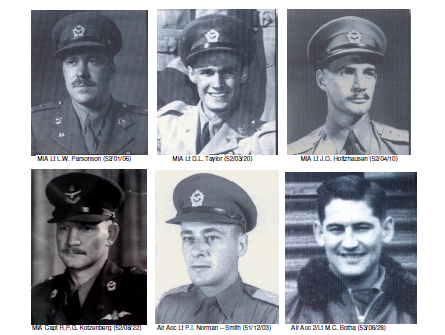 The South African Air Force No.2 Squadron members who were listed as ’Killed in Action“, ’Missing in Action“ or who died in ’Fatal Aircraft Accidents“ and whose remains have not yet been found. [SOUTH AFRICAN AIR FORCE MUSEUM/ SOUTH AFRICAN KOREAN WAR VETERANS ASSOCIATION]


This series is a weekly publication in cooperation with the 70th Anniversary of the Korean War Commemoration Committee.