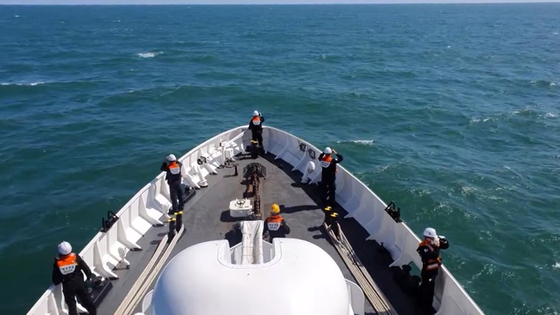 South Korea’s Coast Guard conducts a search Saturday for the missing body of the fisheries official fatally shot last week by North Korea after he went missing near Yeonpyeong Island in the Yellow Sea. [NEWS1]

North Korea warned the South on Sunday to stop violating the Northern Limit Line (NLL), the de facto inter-Korean maritime border in the Yellow Sea, as the search continues for the body of a South Korean fisheries official shot last Tuesday.

South Korea’s Navy and Coast Guard however said that they have been searching for the body of the 47-year-old official surnamed Lee — who was shot and killed by North Korean soldiers last Tuesday after he mysteriously went missing the previous day — in waters south of the NLL.

Pyongyang’s warning came two days after an apology from North Korea Friday claiming that the man’s body had been lost at sea after he was shot, rather than burned, as initially reported by the South’s military.

The North’s official Korean Central News Agency (KCNA) reported in an English-language dispatch Sunday, “We can never overlook any intrusion into our territorial waters and we seriously warn the south side against it.”

The North urged South Korean authorities to “immediately halt the intrusion across the military demarcation line in the west sea that may lead to escalation of tensions.”

The North may be referring to the West Sea military demarcation line (MDL), a line south of the NLL in the Yellow Sea that Pyongyang unilaterally declared in 1999. North Korean has long disputed the NLL, which was set by the United Nations Command (UNC) in 1953 after the three-year Korean War ended in a ceasefire.

The KCNA said that according to a report of the North Korean Navy’s western fleet, South Korea “mobilized many vessels including warships to an action presumed to be a search operation and let them intrude into our territorial waters since Sept. 25” which “arouses our due vigilance as it may lead to another awful incident.”

The South Korean military first confirmed last Thursday that the official working for its Ministry of Oceans and Fisheries’ West Sea Fisheries Management Service had gone missing late Monday from the fishing inspection vessel Mugunghwa 10, disappearing in waters off Small Yeonpyeong Island. Intelligence indicated, according to the military, that he had been killed and burned by the North Tuesday after crossing the NLL in the Yellow Sea. Seoul’s military officials indicated that the North may have killed and burned him out of fear of the coronavirus and also that Lee might have intended to defect to the North.

Suh Hoon, director of the National Security Office in the Blue House, relayed the message from the North’s United Front Department in a briefing Friday and said that North Korean soldiers fired around 10 shots “toward the illegal intruder” from 40 to 50 meters (131 to 164 feet) away in the sea.

However, the North denied that the man’s body had been burned, claiming that only materials left by the man had been burned, contradicting the South’s military’s analysis. There was also no mention of Lee’s intention to defect to the North. This assertion had also been previously questioned as Lee had left his government identification card on the boat before his disappearance.

The KCNA on Sunday described the incident as an “occurrence of an awful case which should not have happened in the present phase of the inter-Korean relation,” and added that the North took “necessary security measures in order to make sure that no more incident spoiling the relations of trust and respect between the north and the south would happen in any case.”

It also reported that the North is “about to organize a search operation in the southwestern waters and the western seashore” and is considering the “procedures and ways of handing over any tide-brought corpse to the south side” in case the body is discovered by its side.

In turn, South Korea's Coast Guard and Navy continued their search Sunday for the missing body of the official mobilizing 39 vessels and six aircraft near the NLL.

A South Korean Coast Guard official said that that the search operations are “taking place in waters south of the NLL,” but also noted that the actual border “considered by the North and South can be different.”

Two CCTV cameras on the Mugunghwa 10 were not functioning.

The Blue House National Security Council (NSC) on Sunday recognized the “discrepancies” in the details of the shooting between the South and North and requested for a joint investigation “to reveal the truth with an open posture and without being bound by the investigation results by each side.

Suh Choo-suk, the first deputy director of the Blue House National Security Office, said in a briefing Sunday after a meeting presided over by President Moon, that the South “takes positively North Korea’s speedy apology and pledges to prevent a recurrence.”

The Blue House also urged the restoration of a military hotline to communicate on the matter.

Suh added that Seoul has asked for the cooperation of Chinese authorities for China’s fishermen who operate in waters near the NLL to help retrieve the body and its belongings.

Political parties are clashing over the possibility of adopting a National Assembly resolution to denounce North Korea over its suspected killing of the South Korean official.

The Democratic Party (DP) initially pushed for the adoption of such a resolution after learning of the shooting, but shifted its stance following the Blue House revealing the North’s apology Friday.

In turn, lawmakers of the main opposition People Power Party (PPP) staged a serial one-man rally Sunday, with lawmakers taking turns, in front of the Blue House protesting the handling of the shooting incident .

Rep. Kim Sung-won, a PPP deputy floor leader, during his turn held a picket asking, “We are looking for the president of the Republic of Korea.” 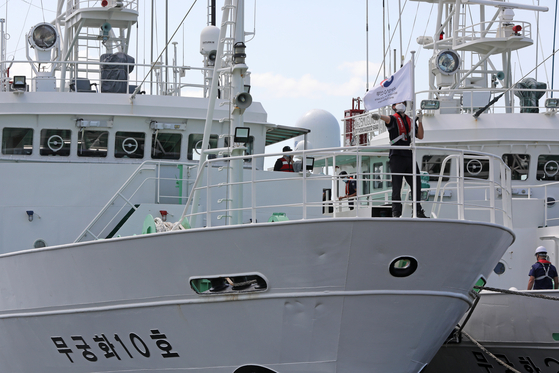 The Mugunghwa 10, the fishing inspection vessel that a South Korean fisheries official disappeared off of near the de facto inter-Korean maritime border in the Yellow Sea, is anchored off the coast of Mokpo in South Jeolla Sunday. [NEWS1]