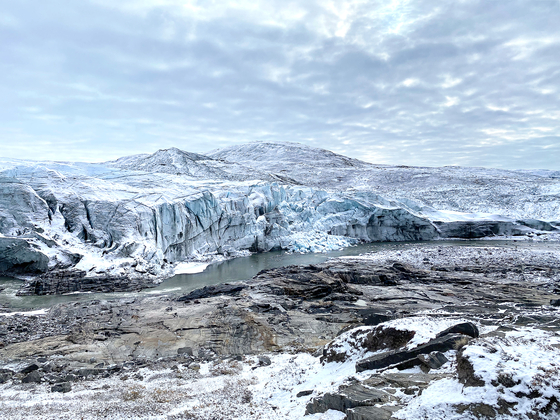 A view of Russell Glacier in Qeqqata, Greenland. The glacier in Greenland is melting seven times more rapidly than it did in the early 1990s. [KIM IN-SOOK]


The JoongAng Ilbo’s special reporting team, through its 55th anniversary series, explores the impact of climate change on the Korean Peninsula and throughout the globe. The series focuses on climate disaster as seen from the eyes of locals and experts, exploring impacts ranging from changes in Jeju's aquatic ecosystem to the rising sea levels and the melting Arctic glaciers. - Ed.

Glaciers are melting in Greenland at an alarming rate, another warning signal of global warming that is contributing to rising global sea levels.

Kim In-sook is the only Korean national living in Greenland, and works for the country’s tourism office. On Sept. 12, he visited Russell Glacier in Qeqqata, Greenland, just some 50 kilometers (31 miles) below the Arctic Circle.

Kim led a team as part of the JoongAng Ilbo’s 55th anniversary series on climate change to witness the breaking ice shelves and melting glaciers in person. Instead of the usual bluish glaciers, they were greeted by a white layer of snow on the Russell Glacier from snowfall the previous day.

Locals who grew up seeing Greenland's majestic glacier, which covers 80 percent of the island, say they are witnessing the rapidly melting ice firsthand.

“I work in tourism; I’m up here almost every day," said Bjorn Luinge, a Greenland tour guide, who accompanied Kim. "I get to see how things are changing firsthand. And a lot of things have been happening, of course, for the past 20 years.”

Signs of climate change are also evident in Nuuk, the capital of Greenland as melting ice sheets result in waterfalls.

“I can see that the glacier on the mountain is shrinking every year,” said Greenlandic Captain Erik Palo Jacobsen from Nuuk as he led the group to the Sermitsiaq Waterfall in Qeqqata. “I see it gets smaller and smaller. In fact, it’s turning into a waterfall, very clear proof that something is really happening and it’s happening quite fast.”

He continued, “The weather is getting more unpredictable, more severe. I’m thinking about my kids. They may be facing hard times because we don’t know exactly what climate change will do to this place.” 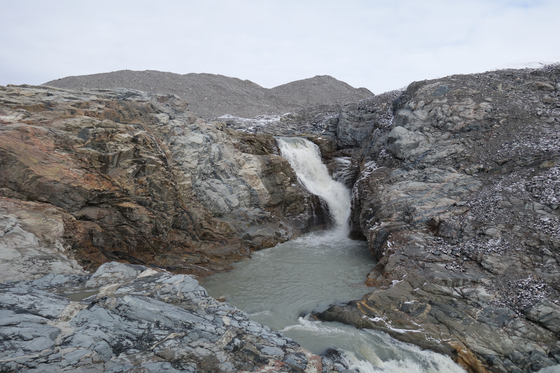 A view of the Sermitsiaq Waterfall in Qeqqata in Greenland. [KIM IN-SOOK]

Experts say that the ice is melting in Greenland some seven times more rapidly than it did in 1990.

According to a study by the ice sheet mass balance inter-comparison exercise (Imbie), an international collaboration between scientists established in 2011, the melt rate in Greenland has risen from 33 billion tons per year, on average, in the 1990s, to 254 billion tons per year over the last decade.

The combined analysis was carried out by a team of 96 polar scientists from 50 international organizations, who combined the findings of 26 ice surveys and included data from 11 satellite missions that tracked the ice sheets’ changing volume, speed of flow and mass.

Greenland is estimated to have lost roughly 3.8 trillion tons of ice since 1992, according to Imbie.

The Imbie team found that Antarctica and Greenland lost 6.4 trillion tons of ice from 1992 to 2017, resulting in the increase in global sea levels by 0.7 inches (17.8 millimeters).

Experts say a continuous atmospheric high-pressure zone in Greenland is resulting in warmer weather, and that consequently there is less snowfall and ice is melting more rapidly. Global climate change, driven in large part by carbon emissions, is seen as contributing to the phenomenon.

The disappearing glaciers and unpredictable weather is also impacting locals in Greenland, especially dog sledding, a traditional mode of transportation in the wintertime necessary for hunting and fishing activities.

Locals point out that they were historically able to dog sled until June, however this year, they were able to do so until April.

The dogs are spending more time tied up, said one local, Francisca Davidson Olsen, a resident of Kangerlussuaq in Qeqqata.

“The Greenlandic sled dogs have developed to drive out into the cold instead of the heat,” she said. “They are very dependent on the ice that should be frozen so that they can get from one place to another.” 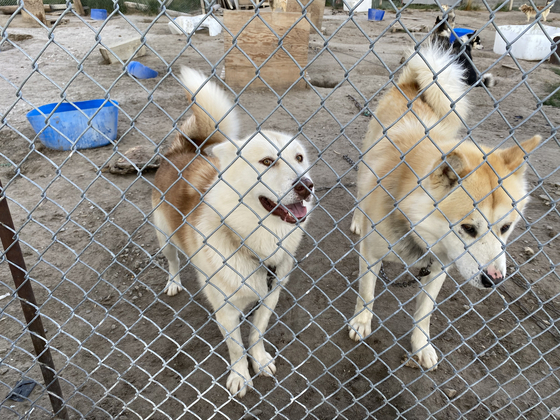 Dogs in Kangerlussuaq in Qeqqata spend more and more time tied up as dog sledding season gets shorter due to warmer weather and melting ice. [KIM IN-SOOK]

Climate experts point out that the glacial melt is not just a far-off phenomenon happening in the Arctic, and that if they continue to disappear at the current rate, it could also impact the Korean Peninsula in the coming decades.

Experts warn of a butterfly effect from the Greenlandic glacial melting and rising global sea levels.

According to a recent study by Greenpeace Korea on the consequences of rising sea levels, over 5 percent of the land in Korea will be submerged by 2030.

Some 3.32 million people living in Seoul, Gyeonggi and Incheon could be directly impacted by flooding, according to the study. Incheon International Airport and Gimpo International Airport, among other major facilities, could be submerged in water, especially with the summertime typhoons and flooding.

The speed of glaciers melting is accelerating. According to the Imbie study, in the early 1990s the rate of loss of Greenland's glaciers was equivalent to about one millimeter per decade, but it is now roughly seven millimeters per decade.

Scientists stress that it is more important than ever to achieve net-zero carbon emissions by 2050 and to set out specific guidelines for this objective.

“The rise in sea levels due to melting glaciers can bring about super typhoons and other extreme climate phenomena in Korea, resulting in an even more serious, complex disaster,” Prof. Kim said. “That is the reason why we have to become a net-zero society.”

“The government’s Green New Deal can be a good policy to encourage environment-friendly projects but is not a policy that can address the climate crisis," said Jeong Sang-hoon, a member of Greenpeace Korea's climate and energy change campaign.