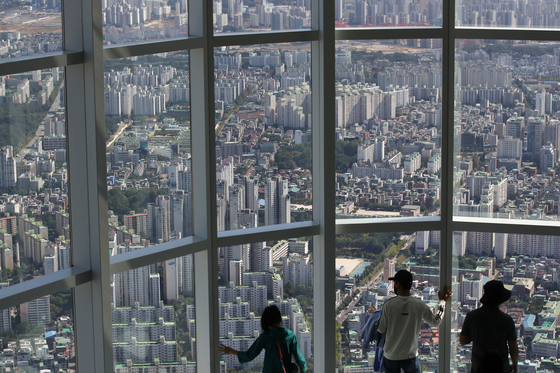 A view of apartments on the south side of the Han River from Lotte World Tower in Jamsil, southern Seoul, on Sept. 27. Despite government efforts, apartment prices continue to rise. [YONHAP]


Despite government claims that real estate prices have been stabilized, the average selling price for an apartment in Seoul exceeded 1 billion won ($852,000) for the first time in a single month.

The price of jeonse, long-term deposit rentals, also continues to rise as the result of the ruling Democratic Party’s tenant protection legislation passed in July.

According to a monthly report on real estate prices by KB Kookmin Bank on Monday, the average selling price for apartments in Seoul this month was 1.03 billion won.

That was 19.3 percent more than a year earlier, and a 27.7 percent increase compared to two years ago.

Apartment prices have been rising under the Moon Jae-in government, despite its nearly constant attempts to cool them down.

In March 2017, just two months before the administration took office, the average apartment selling price in Seoul exceeded 600 million won for the first time. It broke the 700-million-won mark a year later in March 2018. In October of the same year, it rose to 800 million won.

According to KB Kookmin Bank, even the northern neighborhoods of Seoul including Seongbuk, Nowon and Geumcheon districts have seen a significant increase in the last two years.

Other neighborhoods on the north side of the Han River have seen rises of more than 30 percent including Nowon, which rose 39.3 percent year-on-year, as well as Jungnang and Gangbuk districts, which were both up 37 percent.

Increases in the fancy neighborhoods on the south side of the Han River, which were the prime target of government cooling off measures, were less precipitous because they were already high.

Selling prices in Seocho District in the last two years rose 17.9 percent while in Gangnam they rose 18.3 percent.

Geumcheon District was the lowest with the same-sized apartment selling for an average of 604.2 million won.

The most expensive jeonse contracts were in Gangnam District, where an 85-square-meter apartment averaged 872 million won. Seocho District trailed behind with 780 million won and Songpa District with 625 million won.

During a government meeting on real estate measures last week, Hong stressed that the buying frenzy in Seoul has been on a decline.

“What we should take notice of is that the purchasing sentiment that precedes the housing market price increases has started to ease,” Hong said.

Land Minister Kim at the National Assembly as well as in a radio appearance repeatedly stressed that real estate prices in Seoul have been stabilizing since July.

However, Kim was plunged into controversy when she said in late August it was her first time looking at the Korea Appraisal Board’s statistics on the real transaction index, average transaction prices and the median transaction prices presented by a lawmaker from the opposition People Power Party during a National Assembly hearing.

She was accused of cherry-picking statistics from the Korea Appraisal Board.

The Moon government has so far introduced 23 sets of real estate measures to cool off the market since 2017.