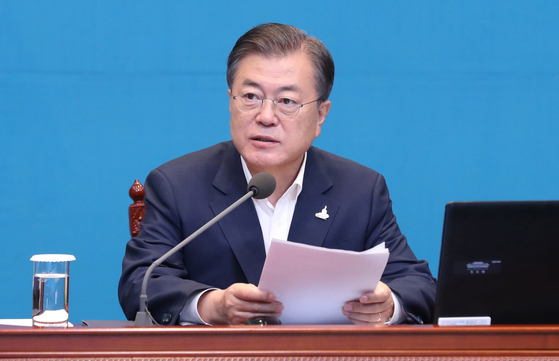 "I offer my deep condolences to the victim's family, regardless of how he ended up in the North Korean waters," Moon said in a meeting with his senior secretaries on Monday. "I can imagine the shock and rage of the people. No matter what happened, the government, responsible for protecting the people's lives and safety, offers an apology."

It was Moon's first time directly addressing the North's killing of the 47-year-old official, who had been employed by the Ministry of Oceans and Fisheries' West Sea Fisheries Management Service at the time that he disappeared from a boat in waters near the maritime border. Moon issued a message through his spokesman on Thursday, but did not mention it in a public event, including his speech at the Armed Forces Day ceremony on Friday.

According to Seoul's Ministry of National Defense, the official, who went missing on Monday, was shot and killed by officials aboard the North's patrol boat on Sept. 22. They also burned his body and discarded his remains in the Yellow Sea, the ministry said, prompting public outrage in the South.

On Monday, Moon said it was promising that the North has quickly responded to the South's demand for an explanation, calling it a sign that Pyongyang may avoid any further escalation of tensions.

"I particularly attach a special meaning that North Korean leader Kim Jong-un sent a message of a sincere apology to our people," Moon said. "It is unprecedented that the North's highest leader made a direct and immediate apology. Kim is taking this incident very seriously, and I can see that he doesn't want inter-Korean relations to collapse."

Moon said the two Koreans should resume dialogue and cooperation. He also said military communications between the two Koreas should be restored to prevent possible military conflicts and unexpected incidents.

"If communications are restored, the two Koreas can easily cooperate for rescue missions when the people of the two Koreas or ships are adrift," Moon said. "I request that the North restore at least the military communication lines and resume their operation."

It remains to be seen if the North will accept Moon's proposal and reconnect the severed military communication lines. Complaining about the South Korean activists' dispatch of anti-Pyongyang leaflets over the summer, the North shut down all inter-Korean communication channels, including military hotlines and contacts at the truce village of Panmunjom, in June.

In the aftermath of the tragedy, the Blue House revealed that Moon and Kim are maintaining contact, and had exchanged letters earlier this month. The National Intelligence Service (NIS) also received a message from the North on Friday, indicating that communication between the two Koreas is still alive.

"I expect this tragedy will create an opportunity for talks and cooperation and advance inter-Korean relations," Moon said.

At the National Assembly's Foreign Affairs and Unification Committee's meeting in the morning on Monday, two resolutions sponsored by the ruling Democratic Party (DP) were introduced for deliberation.

One calls for the two Koreas, China and the United States to declare a formal end to the Korean War. The other was a resolution to urge the South Korean government to allow individual tours to the North.

The first resolution was sponsored by Rep. Kim Kyung-hyup of the DP in June and the latter was sponsored by DP Rep. Kang Byung-won in August. They were automatically introduced to the committee following the mandatory 50-day review period.

Opposition lawmakers refused to discuss the resolutions, citing the sensitivity of the timing, but DP representatives said they want to pass them.

"Our citizen was shot and killed, but you really want to declare the end of the war and resume a tourism project as if nothing happened?" Rep. Kim Seok-ki of the PPP said.

Following heated debates, the two resolutions were handed over to the Agenda Coordination Committee. The committee, comprising equal numbers of lawmakers from both parties, will review the controversial agendas for up to 90 days.

The DP and PPP also bickered over a resolution to condemn the North for killing the South Korean official. Although they unified last week to issue a strongly worded resolution to denounce the North, the DP shifted its stance after the North's apology.

As the public rage mounted over the North's killing and apparent burning of the victim's body at sea, the Assembly's National Defense Committee passed a new resolution condemning the North on Thursday.

The DP's floor leader, Rep. Kim Tae-nyeon, vowed to work with the opposition to pass it during the upcoming plenary session.

"I strongly demand that the North apologize to the South Korean people and victim, and punish those responsible," Kim said Friday morning.

The DP's stance, however, changed later in the day after the North sent a message and offered an apology. The DP, which controls the majority, said Sunday it won't cooperate with the opposition to pass the resolution.

The DP and the PPP negotiated on Monday, but failed to reach an agreement. The DP said it had planned to cooperate on the resolution by holding a voting session later in the day, but the PPP issued a new demand, calling for a hearing on Oct. 6 to question the government officials about the incident. The DP said it had withdrawn its support for the resolution because it does not want the hearing.

A cover-up starts to unravel