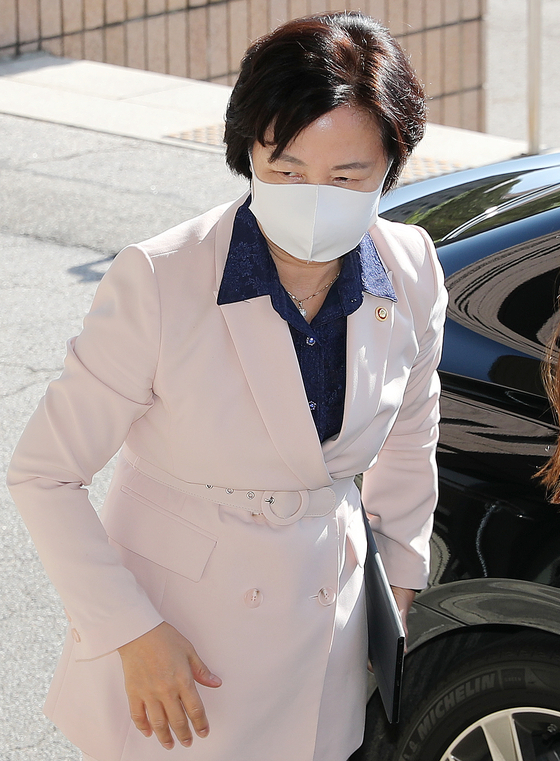 
The prosecution on Monday cleared Justice Minister Choo Mi-ae of allegations that she had abused her power to arrange special treatment for her son while he was serving the military in 2017.

The Seoul Eastern District Prosecutors' Office announced Monday it found no grounds on which to indict Choo, her son or her former aide after a monthslong probe into the allegations.

Choo and her family have been battling accusations that her son, surnamed Seo, had received special treatment when he was serving in the Korean Augmentation to The United States Army, or Katusa, from November 2016 through August 2018. At the time, Choo was the chairwoman of the ruling Democratic Party (DP).

Several whistle-blowers have alleged that Seo was let off the hook when he failed to return to base at the end of his sick leave in June 2017, which had already been extended once. Choo was accused of using her influence to get a second extension, and Seo was subsequently allowed to use personal days.

Choo and Seo consistently denied the accusations. After a criminal complaint was filed in January, the Seoul Eastern District Prosecutors' Office investigated the case for eight months.

"We do not see any deception or outside pressure involved in the process of Seo's applying and using medical leave days," the prosecution said. "He did not return to the base [after the first extension expired] because the application for using his personal vacation days was granted. Therefore, we cannot press an AWOL charge against him."

The prosecution said Seo's initial application for medical leave, the first extension and the subsequent use of personal days were all approved by the regional commander. "Seo was informed verbally about the approvals, and we do not see a purpose for Seo to go AWOL," the prosecution said.

The prosecution added that Seo had asked Choo's aide to inquire the military about the extension, not his parents.

The prosecution also dismissed the suspicion that Choo or her husband had asked the Ministry of National Defense to arrange the extension. Although a document purported to be a military record created by Seo's commander on June 15, 2017 said that Seo's parents had made a request to the ministry, the prosecution said it failed to find any record from the ministry to corroborate it.

The prosecution also said it found no evidence that Choo had made any improper orders to her aide to arrange the extension.

While dropping all charges against Choo, her son and her former aide, the prosecutors asked the Army's prosecution to conclude the probe for two incumbent military officers who were involved in the scandal.

Aid on the way