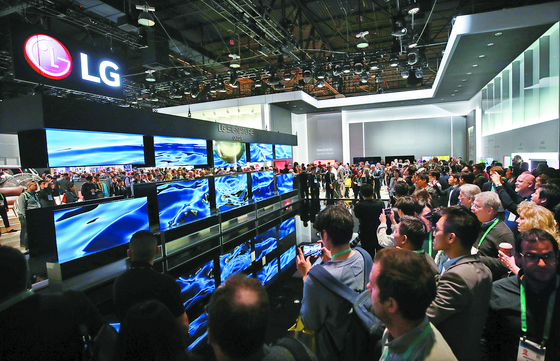 
LG Electronics is reportedly planning to release its rollable TV by the end of October. The company has already been accepting orders from its customers in the highest level of membership.

LG has created a limited-access website dedicated to the LG Signature OLED TV R and began to receive orders from those customers, according to industry experts. The exclusive event for VVIP customers will be held at the Banyan Tree Club and Spa Seoul in Jung District of central Seoul from Oct. 14 to 19.

The new rollable TV has a 65-inch display, offers 4K picture quality and comes with a rectangular speaker. The display has three modes: full view; "line view," for displaying time, music and photographs; and "zero view," in which the television slides down into the sound speaker box upon a click of the remote control. Local media have reported that the estimated price is 100 million won ($85,600), about twice as expensive as LG's 8K OLED TV, which has an 88-inch display.

The company said the product is notable for its paper-thin screen and innovative technology that allows the television to take up minimal space at homes, unlike conventional televisions. The flexible characteristics of the organic light-emitting diode (OLED) allow the TV to roll up and down.

LG showcased the world’s first rollable TV during the CES in 2019, and the product was originally supposed to go on sale that same year. However, LG postponed the release date.