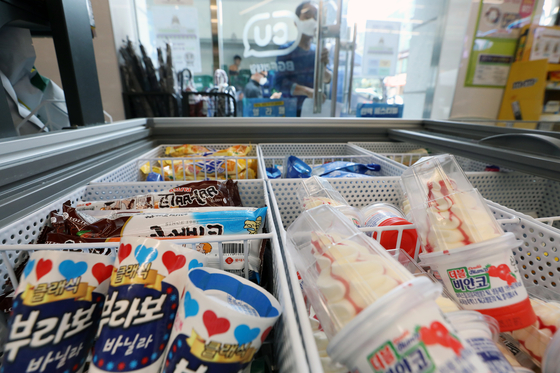 Ice cream is stacked in the refrigerator of a CU convenience store in Yeoksam-dong, Gangnam District, southern Seoul. [NEWS1]


The Fair Trade Commission (FTC) on Tuesday allowed Binggrae to scoop up Haitai Icecream, an acquisition that will bring two of Korea's top purveyors of frozen treats under one roof.

This comes after Binggrae on March 31 acquired all shares of Haitai Icecream, a subsidiary of Haita Confectionery & Food, and applied to the FTC for approval of the merger. Previously on Jan. 2, Haitai Confectionery & Food had spun off its ice cream division in an attempt to improve the company’s financial structure.

The FTC concluded the merger between the second and third players does not pose any risk of price increases and doesn't threaten fair competition in the ice cream market.

“The FTC believes the merger will not disrupt Lotte’s position as the No. 1 player in the ice cream market. Our analysis concludes there’s also a very little possibility for the merger to push product prices,” the FTC wrote in a statement Tuesday.

Instead, the antitrust watchdog projected the merger will provide grounds to boost healthy competition in the ice cream market and help the two companies normalize businesses.

Korea’s ice cream market has been constantly shrinking. Sales of ice cream have dropped almost 30 percent from 2015 to 2019, decreasing from 2.02 trillion won ($1.73 billion) five years ago to 1.43 trillion last year, according to data from the Korea Agro-Fisheries & Food Trade Corporation.

The FTC plans to speed up the approval process of mergers and acquisition deals between companies struggling from the coronavirus pandemic, to help boost respective markets and enhance their competitiveness.