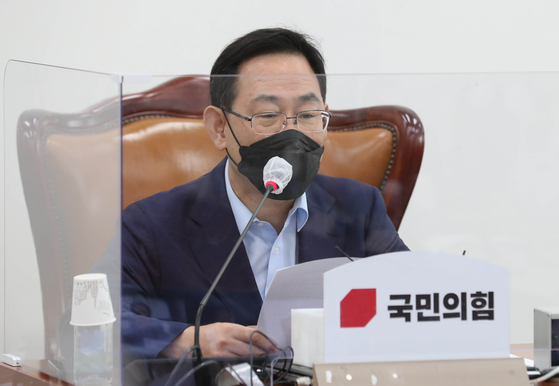 Rep. Joo Ho-young, floor leader of the People Power Party (PPP), speaks at the videoconference meeting of the party's lawmakers on Tuesday. [YONHAP]


The main opposition party on Tuesday said it will file an appeal to the high prosecutors' office to challenge the district prosecutors' decision to clear Justice Minister Choo Mi-ae of allegations she abused her power to seek favors for her son.

The People Power Party (PPP) also said it will push forward an independent counsel investigation to probe allegations that Choo's son had received special treatment when he was serving the military.

"It is not enough to say that the Seoul Eastern District Prosecutors' Office had done a poor job in its probe into Choo's son," said Rep. Joo Ho-young, floor leader of the PPP. "We think the prosecutors conspired with and assisted Choo to cover up suspicions. As soon as we obtain a report on why they were not indicted, we will challenge the decision."

"There is a legal way to challenge the district prosecutors' decision by filing an appeal to the Seoul High Prosecutors' Office, so we will invoke the process," Joo said. "At the same time, we will introduce a bill to appoint an independent counsel."

After an eight-month probe, the Seoul Eastern District Prosecutors' Office announced Monday that it found no grounds on which to indict Choo, her son surnamed Seo and her former aide on allegations that Seo had been let off the hook when he failed to return to base at the end of his sick leave in June 2017. His leave at the time had already been extended once. Choo was accused of using her influence to get a second extension, and Seo was subsequently allowed to use personal days.

Seo served in the Korean Augmentation to The United States Army, or Katusa, from November 2016 through August 2018. At the time, Choo was the chairwoman of the ruling Democratic Party (DP).

"The people are paying attention to the North's killing of a South Korean public servant and the media are quiet as the Chuseok holidays are about to begin," Joo said. "The prosecution used this timing to announce the decision."

The district prosecution announced its decision in a statement released around 3 p.m. on Monday without any prior notice and without a press briefing.

Although the prosecution said it found no legal grounds to indict Choo, its press statement on Monday indicated that Choo had lied to the National Assembly.

According to the prosecution's press release, Choo had sent a Kakao chat message on June 21, 2017, to her aide, providing the mobile phone number of a captain overseeing Seo's military service. She also received a reply from her aide on how he had handled the extension of Seo's leave.

Their communication appeared to be at odds with Choo's repeated remarks in the National Assembly that she had never ordered her aide to ask the military to extend her son's leave.

"Why would my aide to take an order for my personal matter?" Choo said when she attended the National Assembly's Special Committee on Budget and Accounts on Sept. 1.

During a National Assembly hearing on Sept. 14, Choo said, "I have never made an order."

Despite the messages, the prosecution said it will not indict Choo because she only received reports from her aide without explicitly ordering him to extend her son's leave.

Suspicions were raised that improper pressure was applied to assign Seo to the Yongsan Garrison after he finished boot camp, and to select him as a military interpreter for 2018 PyeongChang Winter Olympics.