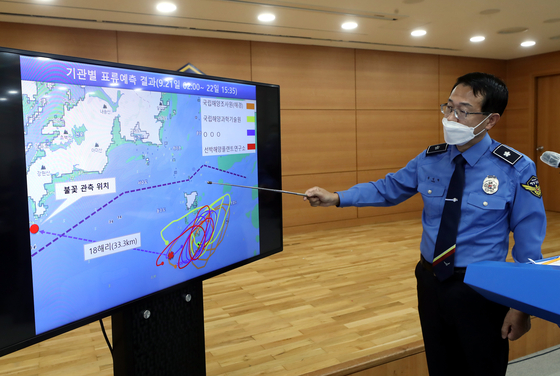 
A fisheries official who went missing near the maritime border last Monday before being shot and killed by North Korean soldiers last Tuesday, clearly made efforts to move northward against southward currents, the Coast Guard said, in order to defect to the North.

The Coast Guard held a press conference Tuesday morning to announce the conclusion of its investigation so far into the shooting death of the 47-year-old employee of the Ministry of Oceans and Fisheries’ West Sea Fisheries Management Service. The victim, surnamed Lee, went missing on Sept. 21 in waters south of the Northern Limit Line (NLL), the de facto inter-Korean maritime border in the Yellow Sea. He was shot and killed by North Korean soldiers north of the NLL on Sept. 22.

Exactly how and why Lee ended up in the North has been a mystery, though Seoul military officials said last week they strongly believed he tried to defect to the North, which his family adamantly denies.

According to Yoon Sung-hyun, chief of investigation and intelligence at the Coast Guard, the agency concluded that Lee was trying to defect to the North based on military intelligence and a study projecting his expected movement in the waters.

Because Lee was wearing a life jacket, the Coast Guard believes it is unlikely he accidentally fell into the water or was attempting suicide, Yoon said.

“Our investigators visited the Ministry of National Defense yesterday to confirm some details,” Yoon said. “When an exhausted Lee was found in the North, he was wearing a life jacket and holding onto a floating object.

“According to the military, the North knew some specifics of Lee’s personal information such as his name, age, hometown and height,” Yoon said. “We also confirmed circumstances that Lee had told the North his intention to defect.”

It was unclear how the military became aware of anything Lee may have told the North. The Defense Ministry did not share the information with the Coast Guard.

The Coast Guard’s conclusion differs from details in a recent message from North Korea. Last week, the North told the South that it approached an “illegal intruder” and tried to confirm his identity, but he gave ambiguous responses. The North said Lee was trying to escape after its soldiers fired blanks at him, so it had to open fire.

Although the South’s military said the North burned Lee's body, the North said it only burned a floating object Lee was on, claiming that his body was not discovered.

The Coast Guard also said Tuesday scientific studies back its conclusion that Lee was trying to defect.

Based on studies of four research institutes including the Korea Hydrographic and Oceanographic Agency, Lee, if he was accidentally set adrift, should have floated in a southwestern direction, Yoon said. Lee, however, was shot and killed in North Korean waters about 38 kilometers (24 miles) northwest of where he went missing.

The Coast Guard said it conducted an experiment by using an object similar to Lee’s height of 180 centimeters (5 feet, 11 inches) and weight of 72 kilograms (159 pounds). The object was dropped in waters near Soyeonpyeong Island, where Lee went missing, and its movement was similar to the studies.

“There is a significant difference between our adrift course projection and the actual location where Lee was discovered,” Yoon said. “Without man-made efforts, it is impossible for him to have actually drifted to this location.”

Experts said a man in stable health, assisted by a life jacket and a floating object, is capable of swimming to the location in the northern waters, Yoon said.

“Lee graduated from a fisheries school,” a Coast Guard official said. “He was working on a fisheries inspection ship for nearly 10 years and he knew very well about the waters near Yeonpyeong Island. Based on the findings so far, we believe he was trying to defect to the North.

“Lee had a total of 330 million won [$282,000] in debt,” the official said, “and 268 million won was from online gambling. But we should not jump to the conclusion that he wanted to defect to the North because of the debts.”

The Coast Guard said it will continue forensic investigation of the boat Mugunghwa 10, from which Lee went missing, and question his associates.

While the Coast Guard concluded in the morning that Lee was killed while making an attempt to defect to North Korea, his family held a press conference in the afternoon to refute the notion. 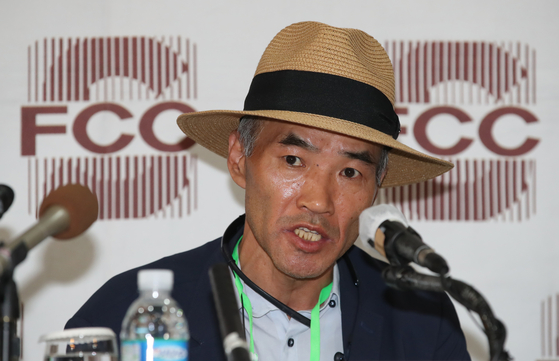 Lee Rae-jin, elder brother of the victim, holds a press conference at the Seoul Foreign Correspondents' Club on Tuesday to denounce the Moon Jae-in administration for having failed to rescue his brother. [YONHAP]

“After my brother went missing and was adrift in the waters for 30 hours, the government and the military did nothing to find and rescue him,” Lee said. “He ended up crossing the NLL into the North. Although there was time before his death, the military made no effort to save him as it was observing the situation for six hours.

“Although the military said it had no emergency contact with the North, the North Korean military broadcast warnings when my brother reached close to the NLL,” Lee said. “The South Korean military immediately aired its response. What is the truth?”

Lee also said his brother had no reason to defect because he had a solid career as a fisheries official. “My brother must have had faith that his country and his brother would rescue him,” Lee said. “I am ashamed that we failed him.”

Murder in Yellow Sea is reopened by Yoon Suk-yeol gov't