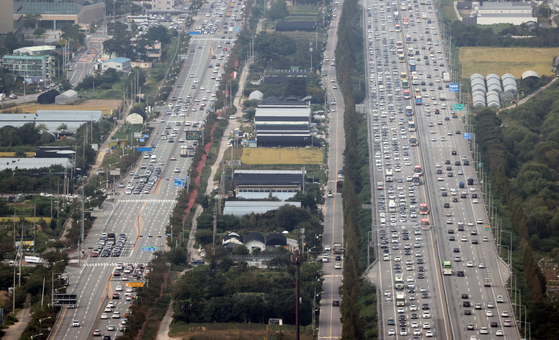 Cars line the Gyeongbu Expressway Tuesday, a day ahead of the five-day Chuseok holiday, in an image captured from a police helicopter. [YONHAP]


Health authorities urged travelers to take extra precautions as over 2 million people are expected to hit the road on the five-day Chuseok holiday, even though Korea’s new coronavirus cases dropped to below 50 Tuesday for the first time since early August.

The country kept new cases in the double digits for the fifth consecutive day, adding 38 Covid-19 patients, of which 23 were local infections and 15 imported, as of Monday midnight, according to the Korea Disease Control and Prevention Agency (KDCA).

This was the lowest number of cases in 49 days, since the country recorded 34 cases on Aug. 11. That was right before a spike in cases especially in the Seoul metropolitan area after new clusters emerged from a church in Seongbuk District and an antigovernment rally downtown on Liberation Day on Aug. 15.

Korea recorded a total of 23,699 Covid-19 cases, with one additional death reported, according to the KDCA Tuesday, raising the death toll to 407, with a fatality rate of 1.72 percent.

There were 11 new cases in Seoul and six in Gyeonggi, the first time since Aug. 11 that daily infections in the metropolitan area dropped below 20. Three cases were in Busan and two in North Gyeongsang. 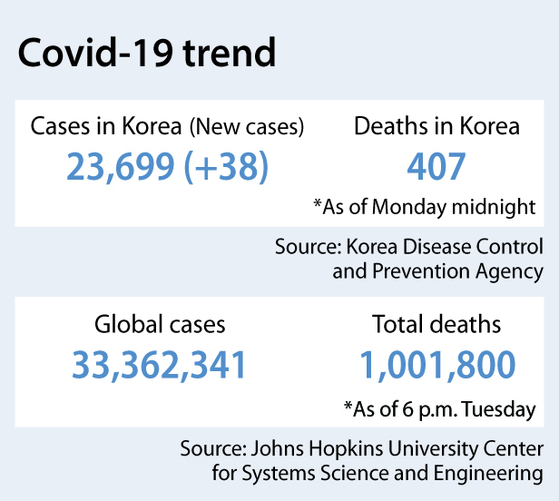 Despite recent coronavirus figures showing a downward trend, Second Vice Health Minister Kang Do-tae said Tuesday, “We urge the people to continue to remain vigilant so that the Chuseok holiday does not become a catalyst for a nationwide spread of Covid-19.”

The government continues to maintain Level 2 in its three-tier social distancing scheme but has also introduced some tailored precautionary measures for the holidays.

The Korea Expressway Corporation said that all indoors seating at expressway rest stops will be shut for six days from Tuesday to Sunday as a part of enhanced social distancing measures.

Restaurants at all expressway rest stops will be prohibited from serving food and only be allowed to provide take-out service to visitors, who will be encouraged to eat in their cars. Travelers will also be required to log in with mobile phone numbers when they drop by.

Travelers will not be exempted from expressway tolls from Wednesday to Friday, as they have been on previous national holidays, a move by the government to dissuade people from traveling.

The Ministry of Land, Infrastructure and Transport estimates that the number of people return to their hometowns this year will shrink to 2.759 million travelers, or 30 percent less than 2019.

The Transport Ministry estimates that 91.4 percent of travelers will be taking private vehicles, 5.7 percent buses and 1.9 percent trains.

More traffic was expected on the highways this year travelers choose to drive as opposed to taking public transportation. Health authorities urged family members that do not live in the same household to wear masks if they travel in the same vehicle.

Health authorities have been keen on preventing a "twindemic," with Covid-19 infections coinciding with flu season in the fall. Korea next week has another three-day break from Oct. 9 to 11, coinciding with Hangul Day.

Health authorities confirmed as of noon Tuesday that 10 Covid-19 cases are related to a munitions company in Seongnam, Gyeonggi.

Small gatherings continue to remain sources of infections, with seven related to family members living in Gunpo and Anyang in Gyeonggi and another 11 to a group of elderly people in Pohang, North Gyeonsang. 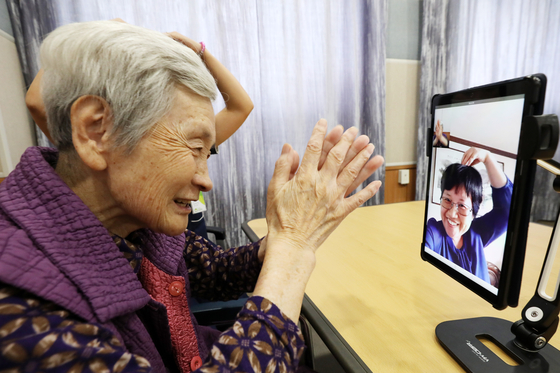 An elderly woman at a nursing home in Suwon, Gyeonggi, holds a video call with her daughter Tuesday ahead of Chuseok instead of an in-person visit, following with Covid-19 social distancing guidelines. [NEWS1]