Murder can never be pardoned without a reasonable cause such as war or self defense. Whatever the reason, North Korea must pay for killing a South Korean civilian. An apology from North Korean leader Kim Jong-un is rare. To hear how “deeply sorry” he is to the South Korean people for disappointing them from a leader who claims to be “perfect” was surprising.

Whether he was swept or intentionally swam across the maritime border, it cannot be denied the official was killed in North Korean waters. Although he was fatally shot, we cannot go to war with the North as more losses are inevitable if we do.

Still, the case cannot be forgiven and forgotten just with a simple apology. If Kim is indeed “deeply sorry,” he should show how much he is.

According to international law, someone in North Korea should be punished for the killing. Although there hasn’t been proper conflict since the 1953 armistice, the two Koreas are still in a de facto state of war. Still, the Fourth Geneva Convention on civilian protection, dubbed the international humanitarian law, provides that civilians under the power of enemy forces must be treated humanely in all circumstances, without any adverse distinction. They must be protected against all forms of violence and degrading treatment, including murder and torture. Moreover, in the case of prosecution, they are entitled to a fair trial with all essential judicial guarantees. North Korea signed on to the convention in 1957.

There also must be a strict provision to prevent a recurrence of the misfortune. North Korea argued it fired at the civilian “under the rules of maritime guard.” We cannot know the specifics of the rules, but if they exist, shooting a South Korean civilian in North Korean waters could happen again. North Korean authorities last month issued a rare order to “kill anyone who enters within a kilometer of the border with China.” The move is assumed to be to prevent border contact between North Koreans and Chinese under threat from the coronavirus. 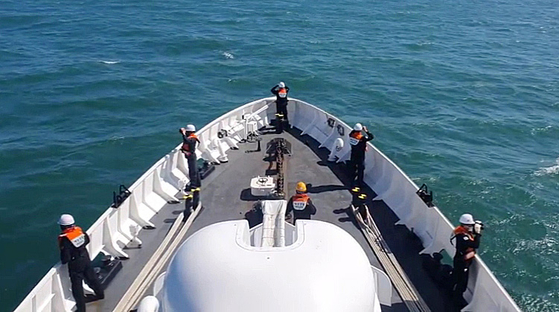 South Korea’s Coast Guard conducts a search Saturday for the missing body of the fisheries official fatally shot last week by North Korea after he went missing near Yeonpyeong Island in the Yellow Sea. [NEWS1]


Few had questioned the cruelty and extremity of the order as nobody expected the casualty of a South Korean. But authorities should have raised vigilance against harm to South Koreans as there can be boats that float into North Korean waters by mistake as well as those that willingly cross the border.

According to the Unification Ministry, 22 South Koreans have been repatriated from the North since Kim Jong-un’s reign began in 2011. Assuming some still live there, South Koreans could be crossing the border every year. Their life would be at risk if North Korea sticks to its border manual. Seoul must demand the removal of the inhumane killing order.

North Korea also must pay its due compensation. Since Kim acknowledged the killing, North Korea must follow its responsibility and compensate for the human loss to the family. If not, the South Korean state must arrange the settlement.

Even if North Korea refuses, the South Korean family can legally collect damages. There is about 2 billion won ($1.7 million) in royalties owed to North Korea for the use of North Korean broadcasts. If the family of the deceased file a damage suit, the local court can order seizure of propertyin South Korea to force compensation. The family of Otto Warmbier in 2015 was compensated through seizing and liquidating Kim Jong-un’s assets in the U.S. after the court found North Korea liable in the torture and killing of the U.S. citizen.

Which actions can actually be taken isn’t known, but still we must demand them as it is a state’s duty to fight for the rights of its citizens.