Ryu Hyun-jin of the Toronto Blue Jays, left, and Kim Kwang-hyun of the St. Louis Cardinals will both start in Wild Card Series games on Wednesday. [AP/YONHAP]


With the MLB’s shortened 60-game season now completed, three of the four Korean major leaguers are expected to appear in the postseason this year.

The MLB's inaugural Wild Card Series will get underway with the American League starting its games on Tuesday, local time, or Wednesday morning in Korea.

This season, the MLB regular season schedule was not the only change caused by the coronavirus pandemic. The postseason has been expanded to a 16-team field, making room for eight teams each from the American and National Leagues.

Along with that, the Wild Card Series is no longer sudden-death. The major league has introduced a series format for the first time ever, to be played as a best of three. All three games, assuming there are three games, will be played at the home of the higher-seeded team.

Finally, the 116th MLB World Series will be played at Globe Life Field in Arlington, Texas, with Game 1 scheduled to start on Oct. 20.

Thanks to the new series format, Korean baseball fans will once again get to see the two Korean major league pitchers — Ryu Hyun-jin of the Toronto Blue Jays and Kim Kwang-hyun of the St. Louis Cardinals — start on the same day.

Once again, the Blue Jays will start their game first, as it is set to start at 5 a.m. on Thursday morning, Korea time.

As the Blue Jays’ ace pitcher, there were high expectations that manager Charlie Montoyo would assign Ryu as the starter in Game 1 of the Wild Card Series against the Tampa Bay Rays. Instead, Montoyo chose Matt Shoemaker to start off the series and Ryu to start in Game 2.

“In a three-game series, the goal is to win two of them,” Montoyo was quoted as saying on MLB.com. “Putting our ace in the middle makes sense to us for several reasons. Plus, our bullpen is fully rested. We said we were going to be creative from the beginning, and that’s one of the reasons we got here, being creative.”

By starting in Game 2 of the Wild Card Series, Ryu gets another day to rest after his latest start against the New York Yankees on Sept. 24. However, this also puts a lot of pressure on the 32-year-old — if the Blue Jays lose Game 1, Ryu will be tasked with keeping the club alive. If they win Game 1, it will Ryu's job to take the Blue Jays to the Division Series.

“It’s not like when you play a two out of three when you’re on the road,” Montoyo was quoted as saying, “and you feel like you need to split the series and then you can go home 1-1. There’s a difference here. The three games are going to be held [at Tropicana Field], so all games count. We feel like that’s our best chance.”

Finishing the regular season on a high note, Ryu will be looking to continue that momentum. In his last start of the season, Ryu pitched seven scoreless innings against the Yankees.

Looking at his performance in his first season with the Blue Jays, Ryu lived up to his big four-year $80-million contract.

But he slowly picked up his pace and saved the best for last. With a win, Ryu finished his season by picking up five wins and two losses with a 2.69 ERA.

In addition to his personal statistics, that final big win also secured the club’s postseason berth.

Just an hour after Ryu's game gets underway, the Cardinals will start their Wild Card Series against the San Diego Padres, starting at 6 a.m. on Thursday, Korea time.

When the Cardinals announced their starters for the Wild Card Series, Kim getting the nod for Game 1 came as a surprise. Considering Kim is a rookie in the major league this season, being tipped for Game 1 of the postseason adds to an already successful year.

Kim started out his season with the Cardinals from the bullpen, but quickly made it into the starting rotation midway through the season, when a number of Cardinals players tested positive for Covid-19. That move turned out to be a success as he finished his rookie season with three wins and a save with a 1.62 ERA.

As Kim also picked up a win in his last start of the regular season, against the Milwaukee Brewers on Sept. 24, he and Ryu managed to pick up wins on the same day in a major league game, the first time two Korean pitchers have done so since 2005.

In the regular season, the two pitchers started on the same day in four games and it was only in the final one that they managed to both pick up a win. As the Cardinals are the fifth-seeded team in the Wild Card Series, they’ll be playing their games at Petco Park, the Padres’ home ground. 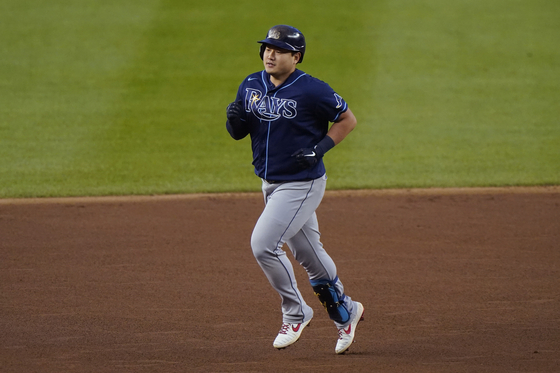 Choi Ji-man of the Tampa Bay Rays hopes to play during the Wild Card Series against the Toronto Blue Jays, starting from Tuesday. [AP/YONHAP]


Along with the two pitchers, Choi Ji-man of the Rays will also be hoping to make an appearance in the postseason. Despite the Rays being the top seeded team in the Wild Card series, it’s uncertain whether Choi will get a chance to play, as he's been out with a hamstring injury since a game against the Boston Red Sox on Sept. 12.

Since then, Choi has been rehabilitating and there has been positive news regarding his comeback. Currently, the Rays are missing two key players from their batting lineup — Choi, Yandy Diaz and pitcher Jose Alvarado.

The Rays still hadn’t finalized their roster for the Wild Card Series as of press time, and manager Kevin Cash has until Tuesday 10 a.m. local time to submit it. Both Choi and Diaz were seen on training with the Rays.

Playing as the Rays’ first baseman and designated hitter this season, Choi had a 0.230 batting average with three home runs, 16 RBIs and 16 runs from 122 at-bats. If Choi does make it to the roster, this will be the second straight season that he has played in the postseason as the Rays appeared last year as well.

In 2019, Choi played in six games for the Rays in the postseason and finished with a 0.188 batting average with one home run and one RBI.

“Positive news on all [three players],” Rays manager Kevin Cash was quoted as saying on MLB.com. “We still have time, and we’ll buy time to make sure that we’re doing right by the decision, and the roster, by 10 a.m.”