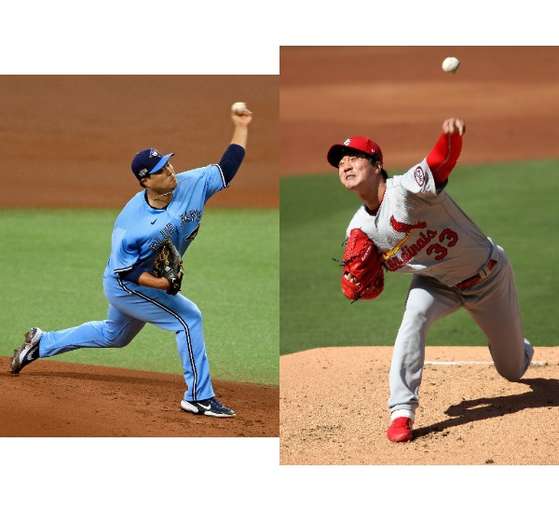 The two Korean major league pitchers were hoping for another historic double win on Chuseok, but sadly that wasn’t to be.

Both Ryu Hyun-jin of the Toronto Blue Jays and Kim Kwang-hyun of the St. Louis Cardinals started in their respective MLB Wild Card Series games on Wednesday evening, or on Thursday morning in Korea. Following wins in both of their last games in the regular season, expectations were high.

The Blue Jays were first to start Game 2 of the Wild Card Series against the Tampa Bay Rays at Tropicana Field in Florida on Wednesday, local time, or 5 a.m. in Korea. As the Blue Jays lost Game 1 3-1 to the Rays, Ryu took to the mound as the last chance for his team to stay in the postseason.

Despite a strong first season with the Blue Jays, Ryu wasn't able to manage this one last trick and the young team ended their postseason journey with an 8-2 loss in Game 2.

Ryu had his worst start yet in a Blue Jays uniform, leaving the mound after just one and two-thirds of an inning having given up eight hits and seven runs.

Ryu started off shaky, giving up a run in the first inning, but the real trouble came in the second. After giving up a hit to Ray’s center fielder Kevin Kiermaier, Ryu gave up a two-run homer to catcher Mike Zunino to allow the Rays to extend their lead.

With just one out, Ryu allowed designated hitter Randy Arozarena to hit a double, and at two outs, Ryu gave up a walk to third baseman Yandy Díaz. With two runners on base, Ryu was desperately looking for an inning-ending out, but a fielding error from Blue Jays' shortstop Bo Bichette allowed the Rays to load the bases.

That's when the unthinkable happened — Rays' right fielder Hunter Renfroe delivered with a clutch grand slam to give the Rays a 7-0 and end Ryu's night early.

Once Ryu left the game, the Blue Jays attempted to catch up with runs at the top of the third and fifth, but that was never going to be enough to cut into the deficit.

The Blue Jays had advanced to the postseason for the first time in four years this year, but that journey will end after being swept out of the Wild Card Series.

Of the seven runs, three counted as earned runs throughout Ryu’s short stint on the mound in Game 2. This was by far the worst start for Ryu this year as he picked up a loss and had a 16.20 ERA.

While the Blue Jays postseason collapse was bad news for Ryu, it's great news for one of the only other Koreans in the MLB playoffs — Rays' slugger Choi Ji-man. It was unclear whether Choi would appear in the Wild Card Series as he's been out for a few weeks with a hamstring injury, but he did manage to make it into the batting box as a pinch hitter.

Although he left the game with a .000 batting average, Choi's appearance suggests that he will be fit to play later in the postseason.

While Ryu suffered a loss and the Blue Jays are headed home, the Cardinals started their Wilds Card Series with a win in Game 1 against the San Diego Padres.

Although the Cardinals picked up a win, Kim’s start was also a disappointment.

Making his first-ever postseason start in the major league, Kim also wasn’t able to fulfill the regulated innings to be eligible for a win as he was lifted from the mound after three and two-thirds of an inning.

Kim gave up three runs off two walks and five hits before being pulled from the mound.

As the Cardinals got off to a strong start by scoring four runs in the first inning, Kim headed onto the mound with plenty of run support. Although Kim never gave up that lead, he did give up a run in every inning.

Thanks to the Cardinals’ strong batting lineup, by the time Kim was pulled off the mound the team had a comfortable 6-3 lead.

With Kim out the game, the Cardinals allowed the Padres another run to finish the game 7-4, winning Game 1.

Although Kim had a no decision, this was his worst start of the season as he gave up three runs and five hits, while striking out two with a 7.36 ERA.

With the Cardinals taking a 1-0 lead in the Wild Card Series, they’ll continue the series in Game 2 on Thursday, local time, or Friday at 6:08 a.m. in Korea, at Petco Park in San Diego.