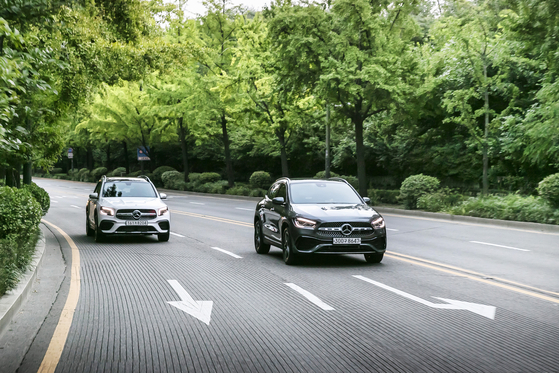 
Everybody knows Mercedes-Benz has strong presence in Korea’s sedan market — particularly in its best-selling E-Class.

The premium German carmaker is vying for a similar level of dominance in the SUV market, with two recently launched models for Korean customers: The fully revamped GLA and the debuting GLB.

The GLA and GLB, categorized as compact SUVs, share the same platform and powertrain, making them siblings.

But they also differ drastically, both on the inside and out.

The Korea JoongAng Daily recently got a chance to compare the two SUVs, driving a 140-kilometer (87-mile) round trip to a cafe in Gapyeong, Gyeonggi.

First came the GLB 250 4MATIC. It was intriguing from first sight, as it looked nothing like Mercedes' other SUV lineup, known for having a fluid and more elegant line.

Instead, the GLB SUV was rather chunky, giving it a boxier and more angular demeanor.

As a fan of the car company’s sophisticated, flowy design language, this GLB SUV's exterior didn’t appeal to me as other models.

Taking a look at its interior, however, showed that this car's aesthetics were not at its foremost for its designers.

Despite it being a compact SUV, the GLB provided ample space in both the front and back rows, making it an adequate option for families.

Its wheelbase is 2,830 millimeters (111 inches), approximately 100 millimeters longer than the GLA's 2,729 millimeters, and falling just shy of that of the GLC in the company's larger lineup, at 2,875 millimeters. With the second row folded, this SUV has a luggage capacity of 1,805 liters (477 gallons).

Mercedes-Benz Korea said the seven-seater version will launch next year and will bolster its creds as family-friendly vehicle.

Once on the road, its handling wasn’t as smooth as expected. After all, it was a compact SUV, and the expectation was that it should be agile and quick. On an urban road, the vehicle's first impression left me with the hefty, rough feeling of driving an off-road-oriented SUV.

It wasn't until reaching the empty highway that this boxy SUV finally showed off its strong points. At high speeds, the vehicle was extremely stable, although noise from the ground and wind was easily audible. On winding or bumpy roads it felt like the vehicle was firmly gripping to the surface.

The carmaker said the GLB 250 4MATIC comes with an Off-Road Engineering Package that offers stronger control and additional information on the center display, such as the degree of the slope and the condition of the suspension. The test drive course did not include off-road routes, so I didn’t get to try this mode out. But this package seems to lack the endurance for the toughness of unpaved roads.

Its smaller sibling, the GLA 250 4MATIC, has actually been with Korean customers longer, as the company launched its previous version here last year.

It inherits the curving, elegant line of Mercedes-Benz’ SUV family but its swooping roofline and driving performance hews closer to a coupe-like demeanor.

The GLA provided a drastically sportier performance. The steering wheel was much smaller and the handling, therefore, was more responsive.

Its acceleration was quick and its handling was light — both of which were maintained at high speeds as well. The vehicle did, however, rock slightly when travelling in excess of 120 kilometers per hour.

Its backseat would feel a little cramped for some, but what was noticeable was the affluent headroom secured as the latest fully revamped version has gotten 110 millimeters taller.

The target customers were clearly different for the two SUVs. The GLB SUV is a more practical option for those who have more family members or friends to carry around. The GLA was more of a stylish option for those who will travel shorter distances and want to have some fun inside the city.