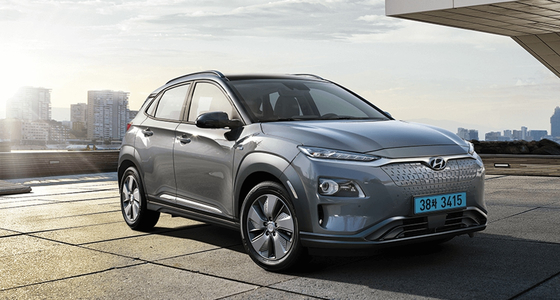 
A Hyundai Kona electric vehicle (EV) burst into flames in the early hours of Sunday morning while parked in the underground parking lot of an apartment in Daegu, the 12th such incident since the model's launch in 2018.

The vehicle was parked in front of a slow EV charger when the blaze started at 2:47 a.m. The fire was extinguished in 10 minutes, with residents of the complex made to wait outside until it was considered safe. The incident caused zero injuries but the entire vehicle was damaged in the fire.

The National Forensic Service plans to investigate the case and is considering possibility of the EV catching fire after completing charging.

The Hyundai Kona was the second best-selling EV in Korea in the first half, behind Tesla’s Model 3. More than 30,000 Kona EVs have been sold in Korea since 2018, and the model has also proven popular overseas, especially in Europe.

Despite that success, consumers are becoming increasingly concerned over the string of fires. Twelve cases so far had been reported by local media, starting from the fire that took place in Hyundai’s Ulsan production plant in May 2018. Overseas, one Kona EV caught fire and exploded in a garage in Canada on July 2019, blowing off the garage door and roof.

Sunday’s incident happened just a week after another Kona EV caught fire in Jeju Island on Sept. 26. The vehicle was also parked, connected to an EV charger inside the parking lot of an apartment building. But the circumstances of the 12 cases are not all consistent: Some were connected to chargers when the fire broke out while some were just parked normally.

Acknowledging that repeated fires occurring from the same model is unusual, the Ministry of Land, Infrastructure and Transport initiated an investigation into the burnt Kona EV vehicles in September last year. The results have not been disclosed yet.

“EV batteries are like a combination of small containers tied together. [The management system] should charge these small containers on an even level and consume power in the same stable way. The problem occurs when that balance is broken. If the battery can’t withstand the energy stored, that’s when the fire occurs regardless of whether the vehicle is plugged or not plugged into the charger,” said Kim.

“Batteries in each vehicle are designed to have the optimal battery size, capacity, charging speed and cooling system that works best on that specific model. Kona’s battery just isn’t the case.”

An online petition posted on the Blue House website on Sept. 3 accused Hyundai Motor of putting in more effort to conceal the fires instead of clarifying the reason behind them.

“The government is committing massive budgets to boost eco-friendly automobiles. But this vehicle is exported to many countries — there needs to be a thorough inspection to see whether it is properly made,” the petition said. It received 7,020 signatures and did not meet the 200,000 threshold required to receive an official response from the Blue House.