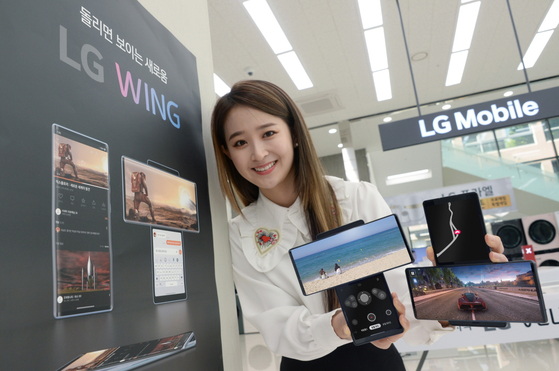 LG Electronics' rotating Wing smartphone will be released in Korea on Oct. 6 with a price tag of 1.09 million won ($930).

The electronics maker said Sunday overseas sales will start in the United States on Oct. 15, without specifying a price tag for that market. Verizon will be the Wing’s exclusive U.S. seller.

The Wing is the first model in LG’s “Explorer Project” initiative to explore innovative form factors. Even as competitors like Samsung, Huawei and Motorola have been searching for ways to fold a single wider screen in the race for a new form factor, LG has stuck to the concept of “dual screen” phones, with two separate screens that can be used simultaneously.

In a January press event, LG Electronics CEO Kwon Bong-seok said it’s not an issue of technical capability, but doubts over the “marketability” of folding smartphones that has kept the company away from the competition.

Among the Wing’s 6.8-inch and 3.9-inch OLED screens, the larger top display can be rotated 90 degrees in a clockwise direction, exposing a smaller, square-sized screen underneath that, when deployed, making the entire thing look like a "T."

“Displays are the largest portion in costs among smartphone components. From that perspective, our aggressive pricing strategy reflects our drive to take away that unnecessary price bubble,” LG said in a Sunday statement.

LG’s latest premium segment phone comes with four cameras, three of which are in the back, ranging from 12 to 64 megapixels. It is powered by Qualcomm’s Snapdragon 765G 5G and contains 8 gigabytes of RAM and 128 gigabytes of internal memory.