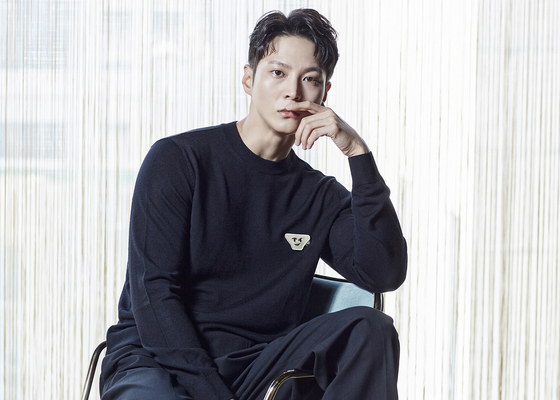 Joo Won stars once again in the upcoming musical "Ghost," which kicks off at the D-Cube Arts Center from Oct. 6. [SEENSEE COMPANY]


On TV, actor Joo Won plays a charismatic but apathetic detective on the most popular primetime weekend drama series “Alice."

On stage, he turns into a soulful “Ghost,” trying everything he can do to express his love and protect his girlfriend Molly.

Going back and forth between two different mediums — broadcast television and live theater — is a challenge for any actor, but portraying two completely opposite characters at the same time takes the challenge to a whole new level.

“Only those actors who are serious about live theater can pull that off,” says a publicist from Seensee, the Korean production company of the musical “Ghost,” explaining why it decided to cast Joo Won to play Sam, the male protagonist in the show.

After getting discharged from the military last February, Joo Won had been taking time off, from both on stage and on screen, until he appeared in the drama series “Alice” late last month.

Then things got busier for the actor when rehearsals for “Ghost,” which kicks off at the D-Cube Arts Center in western Seoul, on Oct. 6, began in earnest.

Joo Won says he feels like Jekyll and Hyde these days, trying to shift between two contrasting characters.

Based on the 1990 hit film of the same name starring Demi Moore as Molly and Patrick Swayze as Sam, the musical “Ghost,” with screenplay and lyrics by Bruce Joel Rubin and music and lyrics by Dave Stewart and Glen Ballard, premiered in 2011 in England and the Korean production landed in Seoul in 2013.

The film was such a box office hit here that middle-aged Koreans, who remember getting pixie haircuts to look like Molly and signed up for pottery classes back in the 90s, rushed to the theater to watch the musical version of their all-time favorite movie.

The musical wrapped up to resounding success, leading Joo Won, who played Sam back then as well, to also want to be a part of “Ghost” when it returned.

“I was in the military when I heard about ‘Ghost’ coming back,” said Joo Won in a recent Zoom interview with the Korea JoongAng Daily. “Then I remembered making promises to the fellow actors seven years ago that we should perform together again when it comes back. The chemistry among us was so great we wanted to do it again.”

Actors Kim Woo-hyung, who alternates the role of Sam with Joo Won; Ivy and Park Ji-yeon playing Molly; and Choi Jeong-won playing Oda Mae Brown kept their promises and returned to perform together.

The plot of the musical truthfully follows the film. It centers on lovers Sam and Molly. When Sam dies, he becomes caught between the real world and the next one. As Molly is in danger, Sam can’t leave her, and a medium, Oda Mae Brown, helps Sam to get in touch with Molly to warn her.

Although the musical tells the classic storyline basically using the same lead cast as seven years ago, Joo Won is convinced that those who have watched the show seven years ago will actually enjoy it more. 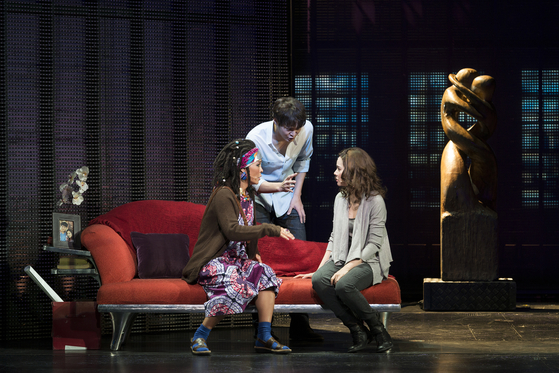 
“It was amazing to see how much everyone has developed over the years,” he said, “in terms of their prowess on stage I mean. They were already such great musical actors back then, but seeing them performing the same thing seven years later, I just couldn’t believe it. They were on a whole new level. Every rehearsal, I feel so grateful that I can perform with them.”

Although Joo Won, who made his debut as a musical actor in 2006, didn't perform on stage during the seven years, he said he is making “all possible efforts to show a new Sam.”

“I think I had too many thoughts back then, and wasn't so sure about how to really express that aching love of not being able to touch or talk to a lover anymore. But I feel a lot more comfortable now, and I’m trying out different emotions,” said the actor, as though he’s learned a lot about love over the past seven years.

“I guess Sam who is seven years older, has become more mature, and more aware of what is going on [with his feelings],” he said. “When I rehearse, I’m surprised to see myself enjoying it so much. I’m less strained and I’m pretty sure that the audience can feel that.”

Although Joo Won made a debut as a musical actor, he’s been gaining more fame with the roles he played in drama series and films. However, the passionate actor says he doesn’t want to let go of the thrill he feels on stage.

“I have great pride in being a live theater actor, who made a debut on stage,” he said. “Although I often appear on TV and in films, I am still a theater actor who can juggle both. Senior actors in fact acknowledge me a lot for it and encourage me to do both and do them well.”

In fact, singers and actors have been crossing into other genres more often in recent years — a phenomenon that continues to create arguments for and against.

Popular idol stars with ticket power performing as lead cast members in musicals has been particularly evident; however, problems have also been rising as busy stars find it difficult to match let alone make time for rehearsals with other cast members.

“Preparing for musicals is quite different to shooting a drama for a film, especially if you are a lead character,” said Joo Won.

“Usually for dramas and movies, the shooting doesn’t go on chronologically and the director shoots certain scenes all together in one day, for example, and the only people that have to show up on site can just be you or your partner. But for musical rehearsals, oftentimes, especially when opening date approaches, dozens of cast including the ensemble all get together to run it through from start to the end. And it doesn’t make sense if you can’t make it.”

“In that sense, we love working with Joo Won and decided to work again with him because he empties his calendar when we have ‘Ghost' rehearsals even though he’s very busy with shooting ‘Alice,’” said the publicist from Seensee. “It’s usually not that easy for popular actors, but Joo Won takes it seriously.”

Joo Won has performed in a handful of musicals since his debut, but “Ghost” will be the only musical that he’s performing twice. He said the musical is so attractive that he’ll do it again when there’s a third chance.

“It’s literally so magical,” he said. “There are a lot of illusions involved in the show as Sam is a ghost and it has to be well presented on stage. It’s amazing how the illusionist and the director made it possible for me to walk through the door and look like a ghost.” 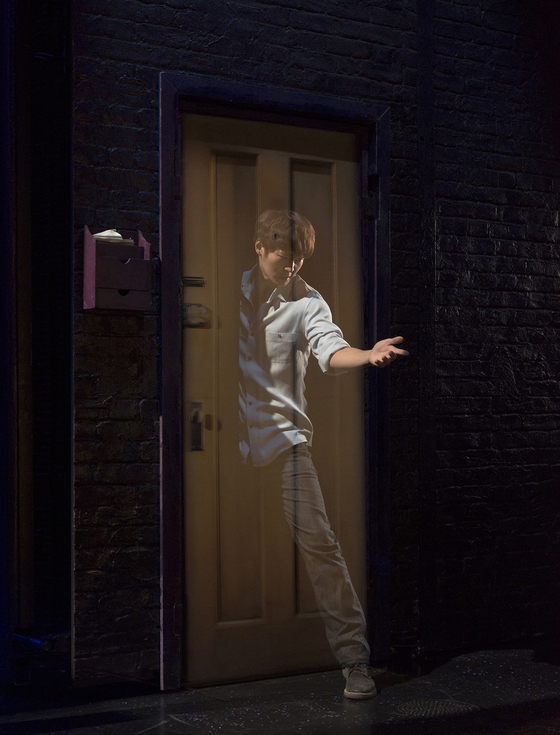 
Since the original film uses a lot of special effects, it was a challenge for the musical production team. But illusionist Paul Kieve, who worked on the Harry Potter films, made it possible.

“Such magical moments beautifully portrayed on stage on top of a great classic story will be what makes this musical a true show,” said Joo Won.