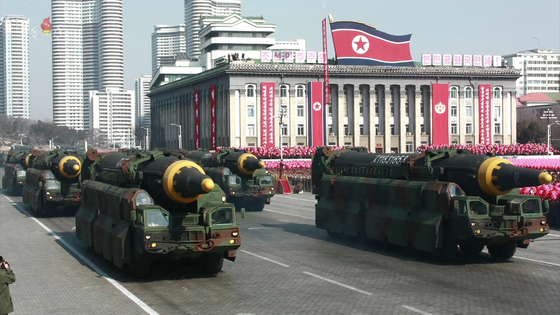 North Korean missiles displayed at a military parade in Feb. 8, 2018, on the 70th anniversary of the country's armed forces. [YONHAP]


With preparations underway in North Korea for a massive military parade next week, speculation is mounting on whether the regime will unveil a new strategic weapon it has warned about in the past.

Oct. 10 marks the 75th anniversary of the founding of the North’s ruling Workers’ Party, on which the regime expects to hold festivities — including immense military parade maneuvers in Pyongyang’s Kim Il Sung Square — all amid the worst economic reality the country has experienced in almost three decades.

Satellite imagery published by 38 North, a North Korea analysis website, last month revealed thousands of troops gathered at Mirim Airport in Pyongyang on Aug. 31 presumably in preparation for the event.

More notably, 38 North noted the construction of makeshift shelters at parts for the facility that was presumably used to “protect and conceal heavy equipment that would be featured in the parade such as tanks, heavy artillery and transporter-erector-launchers (TELs).”

TELs are used to launch ballistic missiles into the air, and have been used in past parades to display the latest weapons in Pyongyang’s arsenal — like the Hwasong-15 intercontinental ballistic missile (ICBM) featured in February 2018.

This year, amid a prolonged impasse in denuclearization negotiations with Washington, conjectures have been rife about a new weapons test from the regime that could shake up the situation in its favor ahead of U.S. President Donald Trump’s bid for reelection in November.

North Korean leader Kim Jong-un notably warned on Dec. 31 last year the world would soon witness a “new strategic weapon” capable of shifting the balance of power in the region, which experts have predicted could be a submarine launched ballistic missile (SLBM).

According to one government source in South Korea, however, those plans appeared to have been delayed by the Covid-19 pandemic, which led North Korea to shut down its borders and reinforce domestic antiviral measures for fear of a mass outbreak that could cripple its outdated health care system.

“[The regime] could use the Workers’ Party Foundation Day ceremony to realize the strategic provocation it has put off for some time,” the source said.

The primary indicator for a potential launch was the presence of several vessels within the secure boat basin, one of which was previously used to tow a submersible test stand barge out to sea, read a CSIS report.

The regime last tested the Pukguksong-3 on Oct. 2 last year, launching a missile that flew 450 kilometers (280 miles) into the East Sea at a peak altitude of 910 kilometers.

The weapon, if tipped with a nuclear warhead, combined with a new 3,000-ton submarine reportedly nearing launch, could give the North the ability to conduct a nuclear strike on the continental United States out at sea where it would be harder to detect.

But there have also been other theories of what the regime has in store for next week. According to the U.S. publication The National Interest last month, a senior White House official as well as multiple U.S. intelligence officials suspect Pyongyang will unveil a new solid-fuel ICBM at the parade.

Such a weapon would be a step up from the two ICBM models the regime currently possesses, the Hwasong-14 and 15, both of which run on liquid propellant and take a long time to fuel. A solid-propellant rocket on the other hand may be launched at a minute’s notice if properly maintained, giving the regime first-strike capabilities over its adversaries.