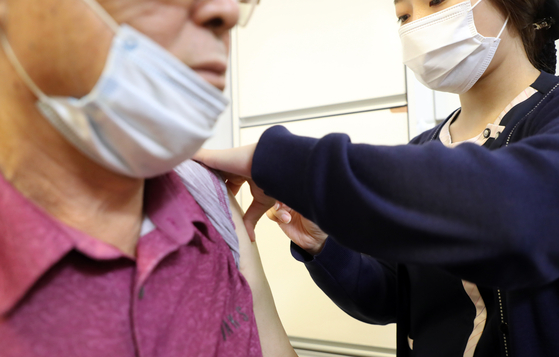 A patient receives a flu shot at a hospital in Dongdaemun District, eastern Seoul, on Sept. 28, which she will pay for. [YONHAP]

The number of people who may have been injected with a flu vaccine that was left at room temperature instead of being refrigerated has jumped to over 2,300, of whom 12 have exhibited “abnormal” symptoms, health authorities said.

Officials said Saturday none of the 12 people were in serious condition and that most had recuperated. Their symptoms included a fever, cough and sore throat. Three are below the age of 10, two between 10 and 19, three in their 30s, three in their 50s and one in his or her 60s.

The Korea Disease Control and Prevention Agency (KDCA) said in a statement that by Friday, a total of 2,303 people nationwide were suspected to have been injected with the faulty shots, though it was unclear how many of those patients actually received a shot that was left at room temperature.

On Sept. 22, the KDCA sent jitters across the nation when it announced that a government project offering free flu shots to the nation’s old and young had been abruptly halted after health authorities detected problems in deliveries. It turned out some vaccines were left at room temperature as they were being shipped to medical facilities, instead of being refrigerated.

At the time, the KDCA said the blunder was found among a batch of vaccines that were to be given to five million people aged between 13 and 18 starting Sept. 22. The vaccines in question had not been administered to anyone, the KDCA said, because they pulled the plug on Sept. 21 and alerted medical facilities not to use the shots on anyone.

That turned out to be false.

On Sept. 25, the KDCA backtracked on its earlier statement, saying some medical facilities were found to have already used the vaccines on their patients.

The number of people who may have come into contact with flu shots that were left at room temperature has been growing ever since. They have been found in 280 hospitals and clinics in 15 different provinces and metropolitans across the country so far, all but Gangwon and Ulsan.

While investigating the delivery blunder, the KDCA said it discovered serious problems in vaccine management on the part of hospitals and clinics, which, to some extent, was why the faulty shots were distributed to the general public. Some facilities were found to have mixed the free flu shots sponsored by the government with other flu shots that people who aren’t covered in the government’s free vaccine scheme had to pay for.

Supposedly due to this reason, the faulty shots were given as recently as on Sept. 29, a week after the KDCA pulled the plug on the free flu program.