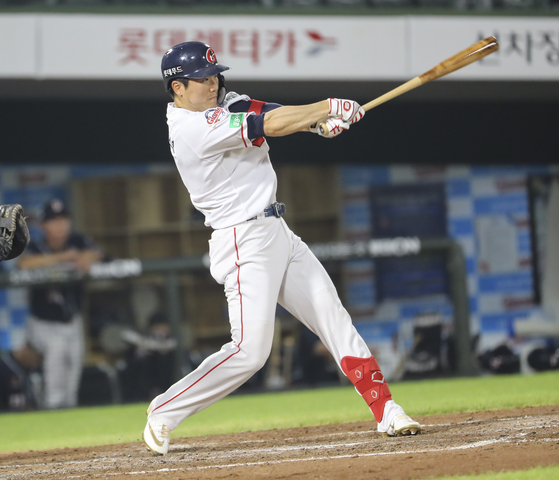 During the Giants’ game against the Hanwha Eagles at Sajik Baseball Stadium in Busan, Oh became only the 27th player to hit for the cycle in KBO history, adding in a grand slam for good measure. While there have been 26 other players in the KBO to hit for the cycle, Oh is believed to be the first person ever to do so in the same game as a grand slam.

Hitting for the cycle is when a batter hits a single, double, triple and a home run in the same game, considered one of the hardest feats in baseball. A grand slam is a home run hit with runners on every single base, giving the batter four RBIs in one swing of the bat. Doing both in one game is so rare that only nine players are believed to have managed the feat in the history of the MLB, and only one in Japan's NPB.

Getting assigned as the Giants’ leadoff and second baseman, Oh started off the game by hitting a double against Eagles’ starter Park Ju-hong. At the bottom of the second, with two outs and a runner on second, the 28-year-old added a single. Then, at the bottom of the third, with the Giants already holding a 5-1 lead, Oh hit a grand slam off of Eagles' pitcher Kim Jong-soo.


Finally, Oh completed the cycle with a triple at the bottom of the fifth.

Remarkably, Oh's grand slam was only the fourth home run of his career and his third this season.

The Giants picked up a big 14-5 victory against the Eagles and are now on a four-game winning streak.

Oh joined the Giants as a developing player in 2015, after graduating from Yonsei University. Although he appeared in 29 games for the Giants in 2015, he failed to leave an impression as he joined the Sangmu Baseball team following his rookie season.

Once he returned to the Giants in 2018, things got worse, as he appeared in 13 games and finished the season with a .273 batting average with no home runs or RBIs. As a utility player, Oh has been playing a number of positions for the Giants and last year, he played his career high number of games, at 79, to finish the season with a .222 batting average with a home run and 21 RBIs.

Although the season hasn’t ended, Oh is having a career high as he has already appeared in 45 games for the Giants and added his name to the history book.