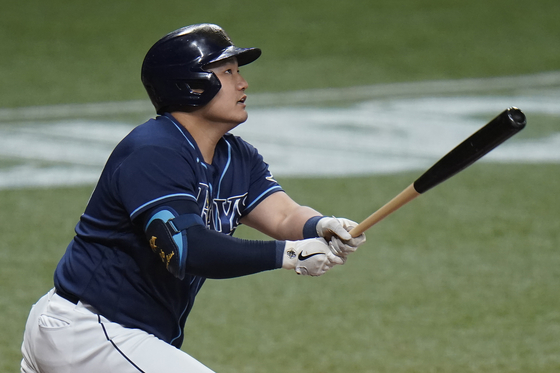 Choi Ji-man of the Tampa Bay Rays is the only Korean major leaguer left in the 2020 playoffs after the inaugural Wild Card Series. [AP/YONHAP]


The 2020 postseason started strong for the MLB's Korean contingent, with three of the four players earning a spot in the playoffs, but only a few games later there's just one man left standing.


With Choi Ji-man's Tampa Bay Rays and Ryu Hyun-jin's Toronto Blue Jays facing each other in the inaugural Wild Card Series, at least one Korean player was guaranteed to make it through to the American League Division Series. In the end it was Choi, with the Rays sweeping the Blue Jays to end Ryu's 2020 season.

The Rays defeated the Blue Jays 3-1 in Game 1 and 8-2 in Game 2. Ryu was the starter in Game 2 with the unenviable task of trying to keep his team in the playoffs. Instead, he had his worst start of the season.

Ryu Hyun-jin of the Toronto Blue Jays, left, and Kim Kwang-hyun of the St. Louis Cardinals, center, were eliminated in the Wild Card Series. Choo Shin-soo,right, and the Texas Rangers failed to make the postseason.


While the Blue Jays' postseason collapse was bad news for Ryu, it's great news for Rays' slugger Choi, now the only Korean left in the contention. Going into the playoffs it was unclear whether Choi would appear in the Wild Card Series as he's been out for a few weeks with a hamstring injury, but he did manage to make it into the batting box as a pinch hitter during Game 2.

Last year, the young Rays advanced to the postseason and Choi made appearances in six games. Throughout it, he had a .188 batting average with one home run and one RBI.

The Rays will now face the New York Yankees in the American League Division Series at Petco Park, in San Diego, California, starting on Monday, or Tuesday morning at 9:07 a.m., Korea time. The Division Series will be played in a best-of-five format.

While Choi still has time left to make improvements, Ryu's 2020 season is well and truly over. Despite a strong first season with the Blue Jays, Ryu's final trip to the mound slammed the door on the team's postseason journey with an 8-2 loss in Game 2.

Ryu left the mound after just one and two-thirds of an inning having given up eight hits and seven runs.

Ryu started off shaky, giving up a run in the first inning, but the real trouble came in the second. After giving up a hit to Ray’s center fielder Kevin Kiermaier, Ryu gave up a two-run homer to catcher Mike Zunino to allow the Rays to extend their lead.

With just one out, Ryu allowed designated hitter Randy Arozarena to hit a double, and at two outs, Ryu gave up a walk to third baseman Yandy Diaz. With two runners on base, Ryu was desperately looking for an inning-ending out, but a fielding error from Blue Jays' shortstop Bo Bichette allowed the Rays to load the bases.

That's when the unthinkable happened — Rays' right fielder Hunter Renfroe delivered with a clutch grand slam to give the Rays a 7-0 and end Ryu's night early.

Once Ryu left the game, the Blue Jays attempted to catch up with runs at the top of the third and fifth, but that was never going to be enough to cut into the deficit.

Of the seven runs, three counted as earned runs throughout Ryu’s short stint on the mound, leaving Ryu with a 16.20 ERA.


“I physically felt good, but I did notice my velocity dipped,” Ryu was quoted as saying on MLB.com, “especially my fastball. I think that the [location] mistakes hurt me more than the velocity itself. In that first inning, they were getting hits off of all my secondary pitches, which made the game extremely difficult for me.”

Due to the coronavirus pandemic, the Blue Jays weren’t able to play a single game at their home stadium, Rogers Center, in Toronto. For this reason, they had to use Sahlen Field in Buffalo, New York, home stadium of the Blue Jays’ Triple-A team.

Despite the difficult conditions, Ryu complimented his team for making it to the postseason.

“I don’t want the past two games to taint all the efforts and hardships that we went through as a team during the regular season,” Ryu was quoted as saying. “We didn’t have a place to call home. Buffalo was a home stadium for us, but for all of us, it pretty much felt like being on the road throughout the season. I’m glad my teammates were able to go through it and to make the postseason was great.”

Following the Blue Jays’ quick exit, Ryu returned home to Korea on Friday. He will have to undergo a mandatory 14-day quarantine before he meets his family.

On the same day Ryu started, St. Louis Cardinals pitcher Kim Kwang-hyun also made his start in Game 1 of the Wild Card Series against the San Diego Padres. As both Ryu and Kim started on the same day, the morning of Chuseok in Korea, expectations were high but sadly that wasn’t to be.

While Ryu suffered a loss, the Cardinals started their Wilds Card Series with a win in Game 1 against the San Diego Padres, but it wasn't thanks to Kim's performance.


Making his first-ever postseason start in the major league, Kim also wasn’t able to fulfill the regulated innings to be eligible for a win as he was lifted from the mound after three and two-thirds of an inning.

Kim gave up three runs off two walks and five hits before being pulled from the mound.

As the Cardinals got off to a strong start by scoring four runs in the first inning, Kim headed onto the mound with plenty of run support. Although Kim never gave up that lead, he did give up a run in every inning.

Thanks to the Cardinals’ strong batting lineup, by the time Kim was pulled off the mound the team had a comfortable 6-3 lead.

With Kim out the game, the Cardinals allowed the Padres another run to finish the game 7-4, winning Game 1.

Although Kim had a no decision, this was his worst start of the season as he gave up three runs and five hits, while striking out two with a 7.36 ERA.

As the Cardinals picked up a win in Game 1, there were expectations that the club might advance to the National League Division Series, but losses in Game 2 at 11-9 and Game 3 at 4-0 ended their postseason campaign.

The Cardinals may have failed to advance, but Kim ends his rookie season in the major league having played as a closer and a starter, appearing in both the regular season and the playoffs.

The Padres, who defeated the Cardinals in the Wild Card Series, will now compete in the National League Division Series against the Los Angeles Dodgers.


The Padres will start Game 1 against the Dodgers at Globe Life Field in Texas on Monday, local time, or Tuesday morning, Korea time.

The fourth Korean MLB player, Choo Shin-soo of the Texas Rangers, ended his season earlier as the Rangers failed to earn a postseason spot this year.

As the oldest and most experienced Korean major leaguer, Choo may well have had his last at bat in the majors, as the veteran finished a seven-year contract with the Rangers this season and has now earned his free agent status.


Suffering from injury this season, Choo finished with a .236 batting average with five home runs and 15 RBIs. Despite his injury, Choo was able to make a last appearance in the Rangers’ final regular season game against the Houston Astros, appearing as lead-off batter and getting on base before being taken out for a pinch runner.

It's still unclear whether 38-year-old Choo will have a chance to continue with the Rangers or pick up a contract with any other club. After 15 years in the majors, the All-Star has a career batting average at 0.275 with 218 home runs and 782 RBIs.