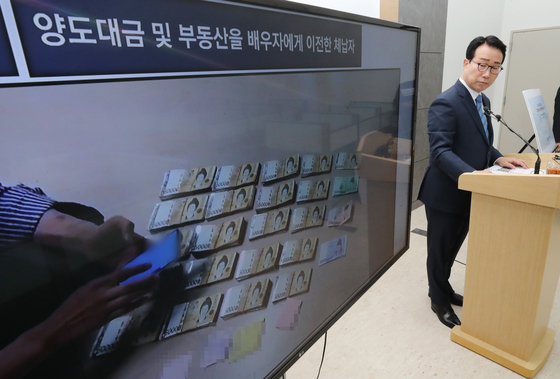 Hidden cash found at the residency of one of the tax evaders being displayed on screen during the National Tax Service's press briefing held at Sejong Government Complex on Monday. [YONHAP]


A lawyer in Gangnam avoided paying taxes despite his huge income. The tax agency started tracking the lawyer on a tip that he was living in an expensive apartment and driving a luxury vehicle.

Tax agents eventually tracked him down at an apartment in Bundang, Gyeonggi, where they found 36 million won ($30,800) in cash stashed in a bookshelf. Agents also found membership to a golf club in Japan, gold bars, luxury watches and bags worth 200 million won.

A clothing manufacturer declared his business bankrupt and shut it down, despite owing the government a huge amount of tax. He reopened the same business at the same spot but under the name of his brother-in-law to try to avoid the tax agency.

The agency was able to prove that he was still the actual owner of the business through big data.

The tax agency said it will not only report the tax evader to the prosecutors’ office but also the brother-in-law as an accomplice.

The National Tax Service on Monday said it is currently investigating 812 wealthy people suspected of being repeated tax offenders.

Not only will they actively track down offenders, but also look into the financial status of relatives.

It especially noted that big data analysis is being used in investigations, which not only looks into the suspect’s financial dealings, but also into personal spending.

The tax agency noted that big data have played a significant role, helping to speed up the process contributing to the efficiency and accuracy of investigations.

Through big data analysis it was able to find the actual residence of 24 tax evaders among 28 suspected of using a fake address.

The tax agency in a statement said that the accuracy in tracking down the actual residency of tax evaders was 85.7 percent, which is said to be relatively accurate.

The tax agency said it has strengthened its investigation against tax evaders despite the coronavirus pandemic.

As a result, in the first eight months of this year, it was able to collect 1.5 trillion won worth of unpaid taxes, which is a 14.6 percent increase, or 191.6 billion won more than the same period a year ago.

Additionally, the cases that it was able to turn over to the prosecutors’ offices amounted to 290, 60 more than the same period a year ago.

The tax agency said starting next year a stricter rule will be applied to repeat offenders.

When found evading taxes, repeat offenders will be subject to imprisonment for up to 30 days.