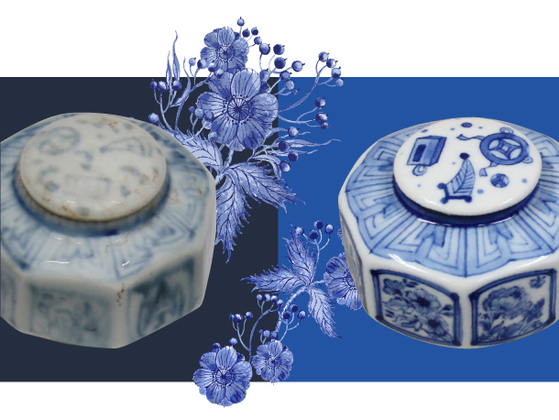 Based on the recent research results on a set of Princess Hwahyeop's cosmetics, the National Palace Museum of Korea, the Korea National University of Cultural Heritage and Cosmax plan to launch a K-beauty brand Princess Hwahyup by November. Left is a white porcelain octagonal flat jar with the seven treasures motifs found inside the princess's makeup box and right is the redesigned porcelain jar by the three institutions for the new K-beauty products. [CULTURAL HERITAGE ADMINISTRATION]


Today's princesses make headlines for their fashion choices. From wedding gowns to makeup looks, people love to scrutinize the royals from head to toe. So when an intact makeup box belonging to Princess Hwahyeop (1733-52) of the Joseon Dynasty (1392-1910) was unearthed in 2016 from an 18th-century tomb located in Namyangju, Gyeonggi, Koreans were thrilled at the chance of getting a glimpse into the beauty culture of Joseon’s royal court.

Born in 1733 as the seventh daughter of King Yeongjo (1694-1776), the 21st king of the Joseon Dynasty, historical records attest that Princess Hwahyeop was dearly beloved by her father, though there are disputes regarding this until today. She married Shin Gwang-su in 1743 when she was only 11 years old and was said to be beautiful, taking after her mother.

A variety of the princess's objects were accidentally discovered in her initial tomb, which was relocated in the 1970s. The items included a tombstone identifying Princess Hwahyeop as the person buried there, an epitaph written by King Yeongjo lamenting his daughter's death and the makeup box, which contained porcelain containers with cosmetic residue still inside, a mirror, a mirror case, and a water dropper among others, wrapped in cloth. 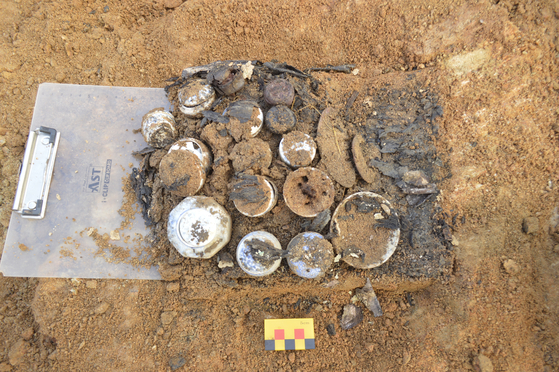 A collection of cosmetic cases and tools has been uncovered from an 18th-century tomb located in Namyangju, Gyeonggi, which belonged to Princess Hwahyeop (1733-52) who died at the age of 20 due to measles. [CULTURAL HERITAGE ADMINISTRATION] 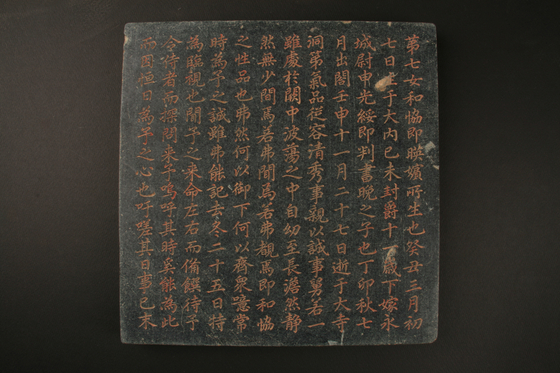 An epitaph written by King Yeongjo lamenting his daughter's death was also discovered inside the tomb. [CULTURAL HERITAGE ADMINISTRATION]


Archeologists said that the box and its contents were able to remain intact for nearly 300 years because it was surrounded by thick tombstones when it was buried.

After years of research, the Cultural Heritage Administration recently announced the detailed materials which could have been used to produce the makeup used by the princess and added that it will create a modernized version of Princess Hwahyeop’s cosmetics using traditional materials.

“Researchers from the National Palace Museum of Korea, the National University of Cultural Heritage and Cosmax, a local cosmetics manufacturer, have been working together to create beauty products based on the result of the research,” said Kwon Hyuk-nam, an official from the National Palace Museum of Korea. Cosmax is one of the biggest suppliers to world-class cosmetics companies and the creator behind hit K-beauty items such as CC cream and cushion foundations.

“We’ll produce skin care and makeup products by using various natural ingredients to produce Princess Hwahyeop’s cosmetics while designing containers which are also inspired by the designs of the princess’s actual containers.”

The three organizations will be jointly launching a cosmetics brand called Princess Hwahyup and distributing it online from November.

“We hope to promote traditionally-inspired Korean skin care and makeup products across the globe and translate the features of royal beauty into the modern generation and amaze global consumers with great K-beauty products,” Kwon added. 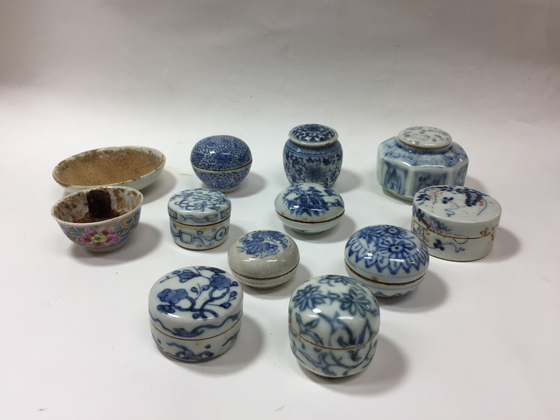 Unearthed porcelain containers found inside Princess Hwahyeop's makeup box. Some of the porcelain is from China and Japan. They were found intact with cosmetic residue inside. [CULTURAL HERITAGE ADMINISTRATION] 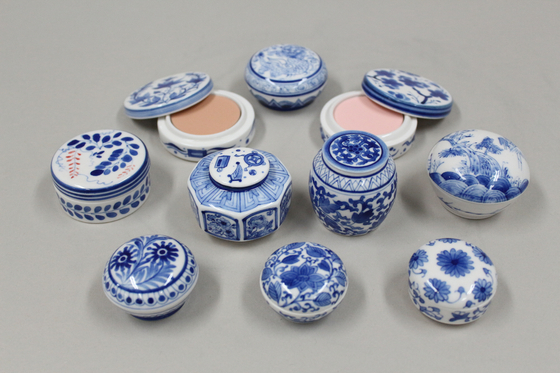 Samples of the new K-beauty brand Princess Hwahyup which is slated to be launched in November. [CULTURAL HERITAGE ADMINISTRATION]


The three organizations signed an agreement late last month to work together until 2023 to develop and promote K-beauty products that are traditionally-based.

K-beauty has already taken the world by storm, becoming a big moneymaker for the beauty industry. Retail cosmetics stores across the world today are eager to secure shelves for Korean beauty products that range from skin care to makeup.

Analysts however, point to the growing interest in skin care across the globe that first brought K-beauty into the spotlight.

This is no surprise as Korean women, for the longest time, have been obsessed with having fair skin.

It was no exception for Princess Hwahyeop, who is said to have used a lot of her fortune on beauty products, sold by makeup saleswomen known as maebungu, who visited different houses carrying expensive makeup and skin care products from other regions.

Many of the cosmetics residue the scientists identified inside the porcelain containers of Princess Hwahyeop’s makeup box were skin care products that focused on whitening.

“As Confucian ideals were strong during the Joseon Dynasty, looking natural was defined as beautiful. Therefore, Joseon women made efforts to take care of their skin, and minimized the use of makeup,” said Lee Jun-bae from Cosmax.

“They used various natural ingredients to produce skin care products such as ground mung beans for facial scrubs, gourd stem juice for toner and apricot and peach oils for whitening. Most of the beauty products were for their skin and efforts to make them look fairer and healthier.”

Inside a porcelain bowl with a lotus scroll design, which is presumed to be from China, there was a solid, brown substance, which researchers revealed was a face cream used by the princess.

According to scientific testing, the brown material contained beeswax and other organic matters that moisturize the skin. In a white porcelain-covered bowl with wisteria design, which experts say is an import from Japan, was a white substance that may have been used as a face powder to make the skin look fairer. The main components of the white powder were lead carbonate and talc.

Although not found in Princess Hwahyeop’s beauty products, historical records state that Joseon women also used rice flour to make face powders. As for lipstick and blusher, it looks like the princess had used a red powder, which was found inside a Bunchae white porcelain cup with a floral design. The red powder contained cinnabar and safflower. 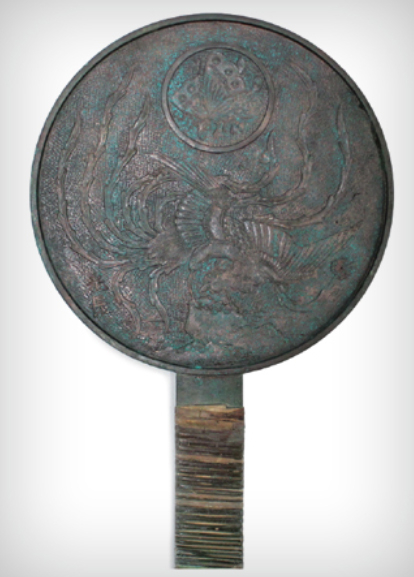 A bronze mirror was also found inside the makeup box. [CULTURAL HERITAGE ADMINISTRATION]


There was also a comb, handheld mirror, a little black stick that could have been used as a brush to apply blush, and a porcelain bowl filled with dead ants, which to this day scientists have no idea what they were used for.

Although they weren’t inside Princess Hwahyeop’s makeup box, historical records state Joseon women also made toners using vegetables such as cucumber, gourd and motherwort. As for moisturizers, they used oils from animals and plants, the most popular being camellia oil. For their eyebrows, they mixed charcoal powder with sesame oil or camellia oil.

“Sadly, a lot of toxic heavy metals were mixed together with natural ingredients to enhance the products' effects and make them last longer,” said Chung Young-jae, Heritage Conservation and Restoration Professor at the Korea National University of Cultural Heritage.

For example, by mixing lead and rice flour, face powders lasted longer and the adhesive effect was said to be better. Researchers say it was the women of the rich families or the royal court who could afford to use such powder that were imported from China while common Joseon women just used rice flour, known as baekbun.

“Of course we won’t be adding any toxic ingredients for the Princess Hwahyup products, and will instead be adding alternative ingredients commonly used in modern day cosmetics production to enhance their effects.”

The three institutions also created a character of Princess Hwahyup to promote the brand.

“We’ll develop the containers and the character from here and hopefully launch the brand in November,” said Lee from Cosmax.

“Sadly due to the coronavirus outbreak, we can’t target foreign visitors to Korea, but when they begin to visit Korea, we will distribute the products at various retail stores and souvenir shops and let the world know about what kind of products served the skin of a Joseon princess.”