The message remains the same for director Kang Dae-kyu

The message remains the same for director Kang Dae-kyu 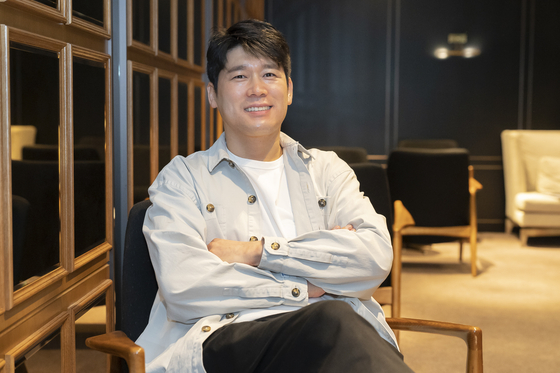 
Director Kang Dae-kyu defines a good story on whether or not the narrative can be explained in one sentence.

“In that one sentence, listeners should be able to comprehend what the story is trying to say,” Kang said in an interview with the Korea JoongAng Daily last week at a cafe in Samcheong-dong, central Seoul. “The sentence should also spark curiosity about what would happen after the end of that sentence.”

While director Kang’s latest film “Pawn” adapts certain clichés and familiar emotions to bring the audience to tears, he decided it was worth it if it meant the audience could reflect on the meaning of family. Despite the prolonged Covid-19 pandemic, the film managed to garner over 820,000 in ticket sales in the five days since its release on Sept. 29, which fell during the Chuseok holidays.

“It’s also related to the message of my last film ‘Harmony’ (2009) — although not related by blood, it’s about people who become families in extreme circumstances — it’s a new form of family, and through seeing [the characters] bond and saying goodbye, I thought it could [make the audience] look back on the meaning of family [and its importance].”

In “Pawn,” Doo-seok and Jong-bae are loan sharks who take a 9-year-old girl, Seungi, as security but end up raising the child. The trio, in a way, become a family, and Doo-seok in particular becomes quite taken with Seungi, which, over the course of many years, transforms into a paternal love.

“I don’t think universal emotions or clichés are necessarily bad,” Kang said. “Considering how ‘Pawn’ used them to carry the plot, I think it could actually be a plus — if the story has a sturdy enough plot I think the audience can naturally accept them.”

When asked whether or not Doo-seok’s unconditional love for Seungi may seem unrealistic, the director noted that it’s actually not that far off from reality. 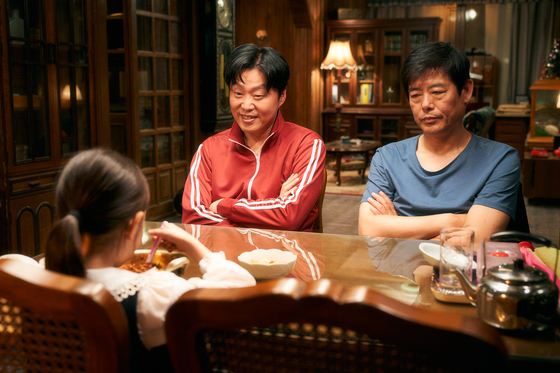 Doo-seok (played by Sung Dong-il) and Jong-bae (played by Kim Hee-won) stare at the 9-year-old Seungi now without a mother after she was deported back to her homeland. [CJ ENTERTAINMENT]


“I think that there’s at least one person who’s like a father figure for every person — someone who reaches out a helping hand no matter what,” Kang said. “Doo-seok didn’t feel that way for Seungi from the very start — in the beginning, it began with the tiniest bit of sympathy, a doubt, which through interaction, expanded to love. From Doo-seok’s point of view, this is natural, and I think that relationships can be like that. Like an unconditional love your parents give you, if you click with someone right away, you can become very close.”

Kang defines family as a presence who is always there for one another, and throughout the interview he persistently thanked those who supported and encouraged him in the making of “Pawn.”

The director brought the audience to tears with “Harmony,” which was about a group of female prisoners practicing in a choir to perform for their families at the end of the year, but after his debut feature film, he’s been absent from his position as a filmmaker and instead participated in writing the script for films such as “The Himalayas” (2015) and “Confidential Assignment" (2017). “Pawn” is his second feature film to be released in local theaters.

“It took me so long to get ‘Pawn’ up on screens, and it was only possible because my friends and acquaintances supported me and told me not to give up on my dream — that is why I could be here today,” Kang said. “I think that’s what family is. It’s a little bit broad, but I think family is those who look over you until you fall asleep.”

Among those friends are actors Kim Yun-jin and Na Moon-hee, who both featured as leads in “Harmony.” In this film, they portray Seungi’s mother and grandmother.

“They both obligingly said yes when I asked them, and I think it was their way of offering support especially because this was my next film after ‘Harmony,’” Kang said. “Na asked me if there was any role that she could do to help. That’s how much we connected in our prior film, and I believe we would be that kind of encouragement to one another — if there’s anything that we could do for each other, we would gladly do so.” 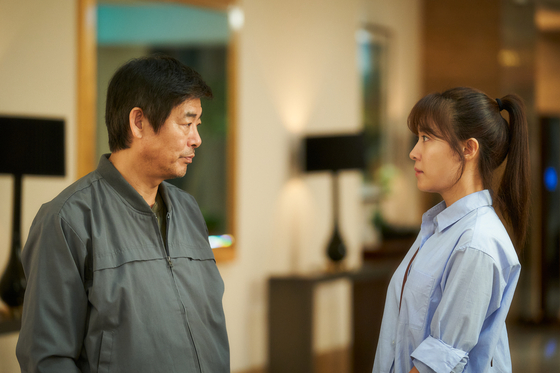 Doo-suk and adult Seungi (played by Ha Ji-won) from the film. [CJ ENTERTAINMENT]

“There’s a Japanese film called ‘Like Father, Like Son’ which is about a family who one day comes across the truth that their son has been switched at the hospital — it throws up the question about what really matters — affection and love that the family feels for one another or heritage,” the director said. “There’s also an Israeli film called ‘Noodle,’ which is about a stewardess who is left with the child of her cleaning lady after she is deported back to her country. The stewardess and the people around the child do everything they can for the child to be reconnected to his mother, and it’s those little emotions that carry on the narrative. A lot of stories from books and movies influenced this one film.”

In essence, the message of both of Kang's films lie in family, but also touches upon social issues to spotlight social minorities or those embedded in social stereotypes — in the case of ‘Pawn,’ the story sheds light on ethnic Koreans from China in the '90s who were then mostly illegal aliens.

“I’ve always had interest, but never really did anything [for them],” the director said. “But as a filmmaker, my way of expressing my thoughts is in films, and I would start my story as a family drama which could go over to other genres and that could include social issues as well.

“I think [the reason my works are family-centered] also lies in my personal story as well,” Kang continued. “I was raised in a happy family, but my mother passed away when I was still a student, and just a while ago my father also passed away, and I realized how important it is to be there for each other when I can. It’s also a universal topic — there’s no one in the world who’s without a family — it’s just that they now exist in more various forms.”