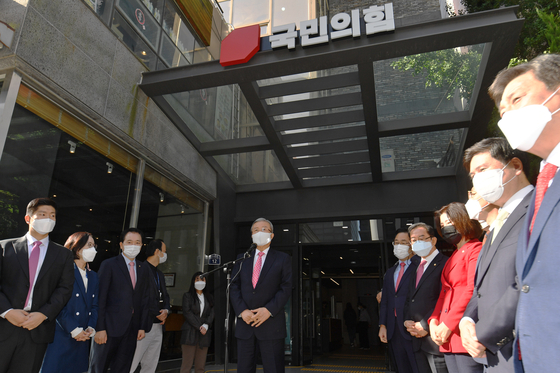 Acting head of the People Power Party (PPP) Kim Chong-in, center, gives a speech at the relocation ceremony of the party to its new headquarters in Yeouido, western Seoul, on Monday. [YONHAP]


The People Power Party (PPP) on Monday held a ceremony to mark its relocation to a new headquarters in Yeouido, the heart of Korea’s politics where the National Assembly is located.

“The PPP must change and restore the people’s trust that we have lost over the past years,” Kim Chong-in, acting leader of the PPP, said. “We will win the Seoul and Busan mayoral by-elections in April next year and score another victory in the next presidential election.”


The largest opposition party held the ceremony in the morning at the Namjung Building, which it recently purchased.

“I am emotional that we’ve come to own a new headquarters after 16 years,” Rep. Joo Ho-young, floor leader of the PPP, said. “We will make a new start with new hope in this new home.”

Kim Seon-dong, the secretary general of the party, said he will never forget the day the conservative party sold its headquarters in 2004 and moved into a makeshift tent.

“I hope this new headquarters will become a space for diversity, loved by the public,” he said.

The history of the PPP’s relocations illustrates the party’s rise and fall during the past three decades.

From 1990 until 1996, the PPP’s predecessor, the Democratic Liberal Party, rented the Kukdong VIP Building in Yeouido, western Seoul. After it changed its name to New Korea Party, the conservative party purchased a site in front of the National Assembly in 1997, ahead of the 16th presidential election, and built its own building. The site is now the home of Hyundai Capital.

The party subsequently went through a period of political crises, triggered by the massive illegal presidential election fund scandal in 2002. In 2004, the party’s chairwoman, Park Geun-hye, sold the building and started using a makeshift tent as the headquarters. The party later moved into a building in Yeomchang-Dong, Gangseo District, miles away from Yeouido.

In 2007, it returned to Yeouido and rented the Hanyang Building as its headquarters. During its 11 years there, the party’s presidential candidates Lee Myung-bak and Park won two consecutive elections.

The party, however, moved out of Yeouido in 2018, following a series of political disasters. Park was impeached and removed from her presidency, and the party suffered crushing defeats in the 2017 presidential election and 2018 local election. It left Yeouido again in July 2018 to the nearby neighborhood of Yeongdeungpo to reinvent its image and reduce costs.

After rebranding its identity as the PPP, the party purchased the Namjung Building in July this year. It will use the third floor for the time being, operating a press center, conference rooms and a lecture hall. The other floors are occupied by existing tenants.

“We spent about 40 billion won [$34 million] to buy this building,” said a party official. The PPP said it raised the money by taking out loans, using city and provincial chapter buildings around the country. It plans to pay interest with the profits it makes renting out the building’s commercial facilities, the official said.