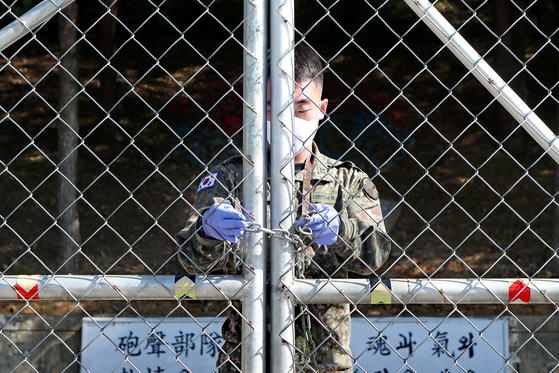 A masked soldier locks the front gate of a Korean Army unit in Pocheon, Gyeonggi, on Monday after 36 Covid-19 cases were confirmed there. [YONHAP]


A series of coronavirus cases among people who traveled to different regions over the Chuseok holiday to see family is raising concern over a web of transmissions nationwide, despite infections staying in the double-digits as of Monday.

The Ulsan Metropolitan City said Monday that a 12-year-old elementary student living in Seoul was confirmed Covid-19 positive Sunday after traveling with his younger brother and parents to visit grandparents in Ulsan over Chuseok.

The boy visited his grandparents from the first day of the holiday, last Wednesday, to Saturday. He began developing a fever starting Friday, was tested Saturday and received his test results the following day.

His family returned to Seoul immediately after the test and checked the boy into a hospital. He is in good condition.

The Ulsan city government said that the boy’s grandparents were awaiting test results and their house had been disinfected. Health authorities are in the process of contact tracing.

Korea’s new infections were below 100 for the fifth straight day Monday, with 73 new Covid-19 cases, of which 64 were local infections.

There were a total of 24,164 Covid-19 cases as of Sunday midnight, according to the Korea Disease Control and Prevention Agency (KDCA), with one additional death, bringing the total death toll to 422.

However, health authorities are now worried about a possible uptick in coronavirus cases nationwide following the long holiday. Fewer tests were carried out over the five-day holiday, and more people flocked to get tested Monday. 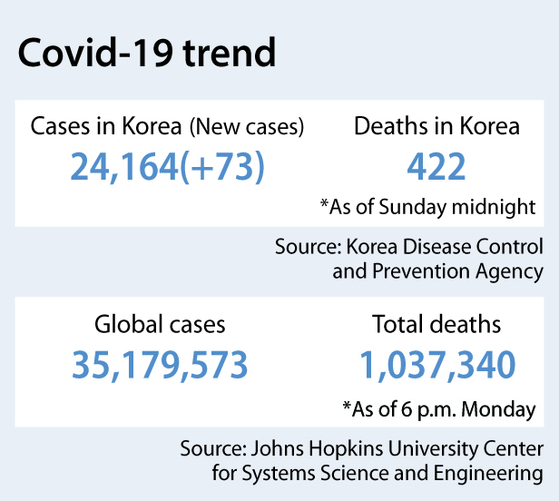 A couple in their 60s from Daejeon are linked to the infection of family members in South Chungcheong and Ulsan.

The husband from Jung District in Daejeon developed a cough and was confirmed Covid-19 positive Friday. His wife likewise tested positive Saturday.

Health authorities said the couple visited Gongju in South Chungcheong on Sept. 21 to visit the wife’s elderly parents and tidy their ancestral graves ahead of Chuseok. On Sept. 23 and 29, they visited again. They stopped at a supermarket in Gongju on Sept. 29. The elderly father, in his 90s, and the mother, in her 80s, began showing coronavirus symptoms including a fever. They were tested at a local health center and both were confirmed positive on Sunday.

Six other relatives from Seoul and Gyeonggi visited the elderly couple’s house in Gongju on Thursday, Oct. 1.

The Daejeon couple also visited Jeju and then flew to Ulsan on Sept. 18 to meet with relatives prior to their trip to Gongju, according to the Ulsan city government. They spent three days in Ulsan, through Sept. 20, at the husband's younger sister’s house. A total of seven people linked to the husband including the 59-year-old younger sister, 66-year-old older sister and 39-year-old nephew were infected.

Health authorities confirmed Monday that a total of 312 Covid-19 cases were confirmed over the five-day Chuseok holiday. Many of the cases happened in the Seoul metropolitan area, Busan and North Gyeongsang.

A group of 36 soldiers in Pocheon, Gyeonggi, including three officers, tested positive for the coronavirus as of Monday morning.

After three soldiers were confirmed positive Sunday, more cases were confirmed as of Monday morning. The base carried out some 230 personnel tests in the Pocheon unit, and the route of infection has yet to be confirmed.

A military official confirmed that one officer visited Seoul on Sept. 26 and 27.

The Defense Ministry has generally restricted military personnel from vacations and traveling outside of their units through Oct. 11 in line with the government’s social distancing guidelines.

Korea has another long weekend with Hangul Day coming up this Friday, and the Seoul city government is working to block mass rallies over the holiday to prevent infections.

The government will also impose a fine of up to 100,000 won ($86) on people who do not wear face masks in public transportation, medical and elderly care facilities and public spaces including during rallies, starting Nov. 13.

Exceptions will be made for children under 14 and people with disabilities who may have difficulty wearing masks. Masks have to cover the nose, and scarves and makeshift coverings will not suffice.

Korea to give 370,000 masks to Koreans adopted overseas