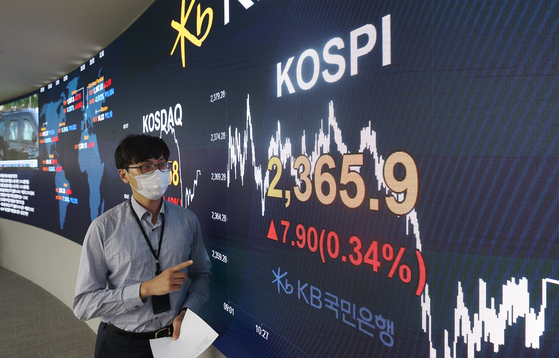 A screen shows the final figure for the Kospi in a dealing room at KB Kookmin Bank in the financial district of Yeouido, western Seoul, on Tuesday. [YONHAP]


Shares closed higher to extend their winning streak to a fifth session Tuesday, as investor sentiment was buoyed by hopes for new economic stimulus in the United States. The Korean won rose against the dollar.

The index got off to a solid start tracking an overnight Wall Street rally on reports of U.S. President Donald Trump's condition improving after he was treated for Covid-19.

"Although talks have yet to reach an agreement, there are reports of progress, leading to growing expectations of additional U.S. stimulus measures," Eugene Investment & Securities strategist Huh Jae-hwan said.

The local currency closed at 1,161.0 won per dollar, down 2.4 won from the previous session's close.