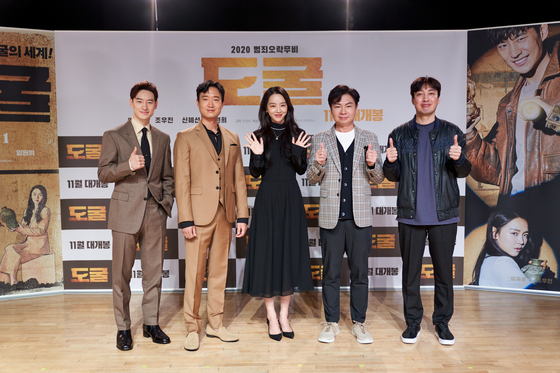 
From the mural paintings in the ancient tombs from the Goguryeo (37 B.C. to A.D. 668) period to the golden statuette of Buddha from Hwangnyong Temple in Gyeongju, North Gyeongsang, the upcoming crime film “Collectors” offers the audience plenty of spectacles aside from its narrative.

Featuring actors Lee Je-hoon, Jo Woo-jin and Lim Won-hee as a team of talented grave robbers and actor Shin Hae-sun as an elite curator and expert on ancient artifacts, the quartet collaborate together to discover a priceless treasure hidden beneath the royal tombs from the Joseon Dynasty (1392-1910) in Seolleung, Gangnam District, the busiest part of Seoul.

Although there have been crime films which center around a group of characters collaborating to reap fortune through robbing a bank, tricking the corrupted and swindling, trying to get rich through grave robbing is something audiences haven't seen from a local film.

“The art team put forth their best effort to create a location set [of Seolleung] including the underground tunnels and sewage system to make it look as real as it can be,” director Park Jung-bae said at an online press event on Tuesday. “As for the artifacts, although our film is based on actual history, it is still a fictional film, and we did our best to create props through [meticulous] historical research [like] the mural paintings, which [the art team] created from scratch. In the case of the golden statuette of Buddha from Hwangnyong Temple, it’s supposed to be the first-ever statuette [from the temple] to be revealed to the world, so we couldn’t rely on other artifacts and had to make it using our imagination and historical data.”

“Although [the statuette] is a prop, I heard that it’s actually very expensive, and one of a kind — the art team only made one, so I wanted to be extra careful around it,” Lee said. “But my character, Dong-gu, is really cool about it and carries it around in a black plastic bag [laughs].”

Lee and Jo, in this film, take on humorous roles which they haven’t done for a long time.

“[After I decided to take on this role], a thought crossed my mind — I wondered when was the last time I made the audience laugh,” Jo said. “My prior characters usually made people angry, sad or [just] made them feel nasty. Dr. Jones [my character], on the other hand, is very playful. Whenever he enters the room, he brightens up the atmosphere, and I really enjoyed playing such a role.”

“Since my previous roles were genre-based or those which tried to send across a meaningful message [to the audience] I don’t think I had the chance to try something cheerful,” Lee said. “I had such a blast playing Dong-gu — this sly, crafty and fun [character] — and I think I’ve never felt this excited to go to work, and it’s making me count down the days until the audience can feel my excitement through the screens.”

The film is set for release next month.