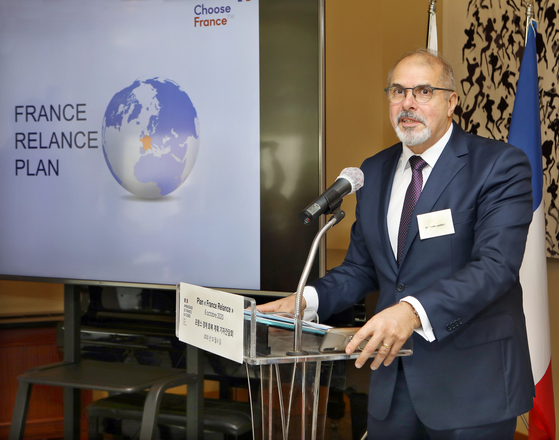 Philippe Lefort, ambassador of France to Korea, speaks about the France Relance Plan during a press conference at the French Embassy in central Seoul on Tuesday. [PARK SANG-MOON]


French companies have it in their DNA to be green and may be the best partners for Korean companies looking to chart new paths, said Na Kyung-soo, president of SK Global Chemical, at a press conference at the French Embassy in Seoul on Tuesday.

“What I did not expect but found in my conversations with the R&D departments in France was that the companies take the environment into consideration from the very first stage of designing a product,” Na said. “Korea is headed in a similar direction, with the latest [so-called] Green New Deal, and I believe there is a lot we can learn by working with our French partners.”

“We chose the French company because of its technological know-how on manufacturing polymer goods,” Na said. “By acquiring their skills, I hope that we will be the pioneering company in Korea to expand its ability to produce environmentally-friendly plastic goods that can turn around the current plastic situation in the country.”

Nearly half of Korea’s waste is plastic, according to data obtained by Greenpeace in 2017. The onset of the Covid-19 outbreak in Korea and subsequent increases in take-out food orders have only contributed to the use of plastic materials.

As part of its Covid-19 recovery plan, the Korean government announced in July that it will invest 160 trillion won ($133 billion) through 2025 in the nation’s digital infrastructure and green energy.

France is eager to partner with Korea on green energy, a key sector that the French government is focusing on in its latest Covid-19 recovery plan.

“With the France Relance Plan, we are hoping that many international companies, especially Korean companies, will find attractive investment opportunities in France,” said Philippe Lefort, ambassador of France to Korea, at the press conference.

The recovery plan announced by the French government on Sept. 3 will invest 100 billion euros ($117.8 billion) — 40 billion euros of which will be funded from the EU recovery plan — from 2021 to 2022 to boost the nation’s green transition and make it an attractive market for international companies via business tax reductions and enhancement of the digital ecosystem. Part of the investment has been set aside for training young people in strategic sectors and modernizing France’s health care infrastructure, according to the embassy.

France came in first place among European nations in 2019 in terms of new foreign direct investment made that year, according to EY European Investment Monitor.

A chronicle of the war against Covid (KOR)