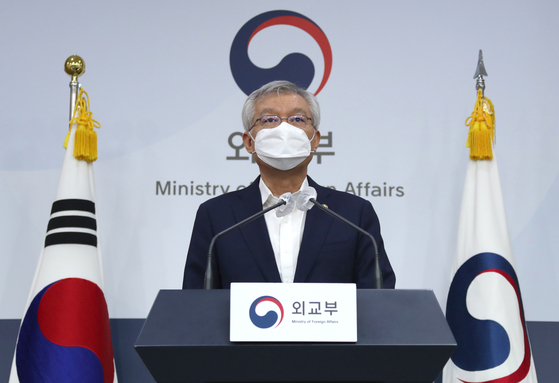 
Korea and Japan agreed to a fast-track procedure for businesspeople to travel between the two countries, announced Seoul’s Ministry of Foreign Affairs Tuesday.

They will be implemented starting Thursday.

Under the special entry procedures, Tokyo agreed to allow businesspeople from Korea to be exempted from mandatory 14-day quarantines in Japan, according to the Foreign Ministry.

The Foreign Ministry said that Korea will be allowing similar exemptions for Japanese businesspeople visiting the country including the waiving of the quarantine period.

Travel between the two neighboring countries has nearly evaporated since early March, after Korea and Japan suspended mutual visa-waiver programs.

On March 9, Tokyo started requiring visitors from Korea to stay at designated facilities for two weeks and suspended 90-day visa-free entries for South Koreans. In turn, Seoul tightened quarantine procedures on visitors from Japan and halted its own visa-waiver program for Japanese citizens.

Since April 3, Japan has introduced strict travel restrictions on foreign nationals from 159 countries.

Seoul and Tokyo have been working on an agreement on expedited entry procedures since late July.

Japan divides the special entry procedure for foreign nationals into the “business track” and “resident track.”

With the eased entry process, businesspeople planning visits under 90 days to Japan will be exempted from mandatory two-week quarantine if they provide a negative Covid-19 test result from the past 72 hours, documents explaining travel plans, a guarantee from their company and health insurance covering their time in Japan. Applications for the business track visas can be made at the Japanese Embassy or consulates in Korea.

After arrival from Korea, the businesspeople will again be administered coronavirus tests at the airport and will have to download a smartphone application which will monitor their health for 14 days. They will also be limited to travel between their lodgings and workplace in a designated vehicle for two weeks.

For the resident track, visitors from Korea staying over 90 days will be required to be tested for the coronavirus upon arrival in Japan and will have to self-isolate at their residences for two weeks, but they will not be required to submit travel plan documents.

Ties between Seoul and Tokyo have been severely strained by historical issues and Japan’s export restrictions in place since last summer.

In his first phone call with new Japanese Prime Minister Yoshihide Suga on Sept. 24, President Moon Jae-in agreed that an arrangement to allow essential travel between the two countries would be helpful.

Foreign Minister Toshimitsu Motegi was quoted by Kyodo News as telling a press conference in Tokyo Tuesday, “Currently, the Japan-South Korea relationship is in an extremely severe situation, so exchanges of people from both countries, starting with businesspeople, are important.”

The Foreign Ministry’s announcement on Korea and Japan’s special entry procedures came in conjunction with four other related ministries: Justice; Trade, Industry and Energy; SMEs and Startups; and Employment and Labor.

Korean Second Vice Foreign Minister Lee Tae-ho said Tuesday, “Through this agreement, starting with our businesspeople, we look forward to the full-blown resumption of personnel exchanges with Korea’s third-largest trading partner and also the country with the second-largest personnel exchanges.”

This marks the fifth such special fast-track entry procedures for businesspeople as Seoul has worked to expedite travel for Koreans to continue economic activities in key partners countries amid the pandemic. Korea and has similar agreements in place with four other countries: China, the United Arab Emirates, Indonesia and Singapore.

Japan is opening, Gimpo-Haneda route to be resumed