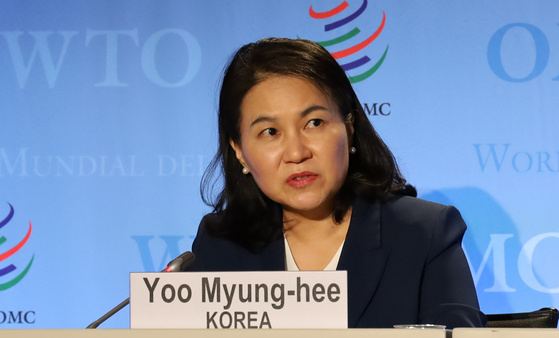 In this file photo, Trade Minister Yoo Myung-hee speaks in a press conference at the World Trade Organization (WTO) headquarters in Geneva, Switzerland, on July 17, 2020 after announcing her bid to run in the director-general selection process. [YONHAP]


In the final days leading up to a second round of votes to select the next head of the World Trade Organization (WTO), President Moon Jae-in made a series of diplomatic overtures to support the bid of Korea’s trade minister, Yoo Myung-hee.

In his phone talks with Bolsonaro on Monday night, Moon also expressed appreciation for the South American country’s contribution to the development of the WTO. Roberto Azevêdo, a diplomat from Brazil, served as the global trade watchdog’s director-general from September 2013 through August 2020. He stepped down one year before his second four-year term expired.

During their 20-minute phone conversation, Moon told Bolsonaro that Yoo is the best candidate to succeed Azevêdo in order to realize common goals of the two countries in the WTO, such as expansion of free trade, advancement of the organization and restoration of the multilateral trade order, Kang Min-seok, presidential spokesman, said.

Yoo’s bid to head the WTO is one of the administration's key diplomatic goals, as Korea’s economy depends heavily on exports. If elected, she will become the first Korean secretary-general of the WTO, as well as the first woman to lead the organization.

He requested support from New Zealand during a phone call with Prime Minister Jacinda Ardern in the same month. Stressing that Yoo is the sole candidate from the Asia-Pacific region, Moon promoted her as the best trade expert who can lead reform of the WTO and strengthen the multilateral trade regime.

According to the Blue House, Ardern told Moon that she is paying attention to Korea’s candidate and has heard great things about Yoo’s abilities.

Last month, Yoo has advanced to the second round of the selection process. She is currently competing against candidates from Nigeria, Kenya, Saudi Arabia and Britain.

Throughout her campaign, she has presented herself as a “bridge” candidate, stressing her role as a mediator in the divides between the United States and China and between rich countries and developing economies.

The second round of voting, scheduled to conclude on Tuesday, will eliminate three out of the five candidates, leaving just two to compete in the third and final stage.

Yoo campaigned in Europe from Sept. 27 through Oct. 2. According to Bloomberg on Monday, European Union governments have decided to support the Nigerian and Korean candidates to lead the WTO as the race enters its final month.

The final selection, which requires a consensus of 164 member countries, is expected to be announced in early November.