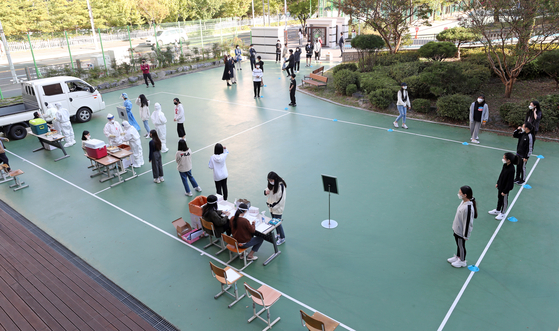 Students at a middle school in Daejeon receive testing for the coronavirus Tuesday on the school’s basketball court after a seventh grader tested positive Monday. [YONHAP]

Health authorities Tuesday said they will announce later this week whether to readjust the nation’s social distancing level from the current Level 2 after analyzing Chuseok’s impact on the spread of the coronavirus.

The new measures are expected to go into effect Monday, immediately after the current measures are set to expire at Sunday midnight.

Yoon Tae-ho, an official at the Central Disaster Management Headquarters, said in an online press briefing Tuesday morning that health officials will first look at daily new infections and how much they rise or fall in the coming days compared to before and during the Chuseok holidays. So far, the figures seem to look “stable,” Yoon said, despite some sporadic clusters. 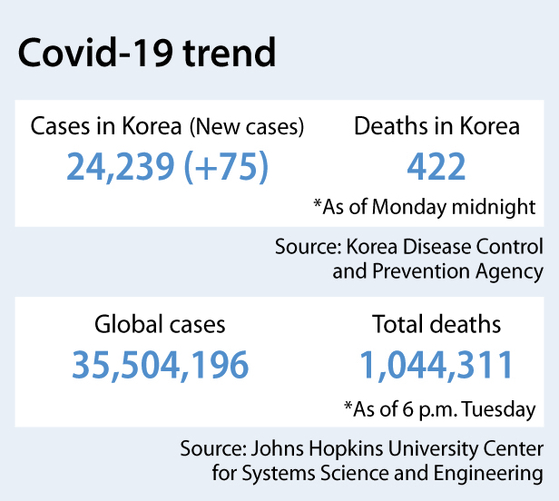 In deciding next week’s social distancing level, Yoon said the government will also look at clusters, untraceable infections, how “fatigued” society is with the social distancing measures and hospitals’ capacity to treat severely ill Covid-19 patients.

Among Monday’s 75 new cases, 66 were local infections: 34 in Gyeonggi, 13 in Seoul, nine in North Jeolla, four in Incheon, three in Busan, two in Daejeon and one in Ulsan. The rest were imported cases: two each from the Philippines and Britain, as well as one each from India, Syria, the United States, Ethiopia and the Czech Republic.

No patients died Monday, leaving total deaths at 422, while 197 patients recovered, bringing total recoveries to 22,083. As of Monday at midnight, Korea had counted 24,239 coronavirus patients in all.

In Uijeongbu, Gyeonggi, a new cluster of at least 14 infections emerged at a hospital Tuesday, of which seven were hospitalized patients. The rest were their caretakers and a nurse. How the virus reached the hospital is not yet known.

Another cluster at a Korean Army unit in Pocheon, Gyeonggi, rose to 37 Tuesday, one more than the previous day.

With numerous conservative civic groups threatening to take to the streets this Friday on Hangul Day, a national holiday, police Tuesday warned they could cordon off Gwanghwamun Square in central Seoul as they did last Saturday on Foundation Day, “if necessary.”

Over 100 anti-Moon Jae-in civic groups had tried to protest in or near the Gwanghwamun area last week, but protest permits were rejected by police after the Seoul Metropolitan Government banned any rallies in the city involving 10 people or more. The Seoul government also designated no-rally zones in many parts of downtown Seoul, including Gwanghwamun Square, where even rallies involving fewer than 10 people were prohibited.

On a separate note, the KDCA and the Ministry of Food and Drug Safety announced in a press briefing Tuesday that the set of government-sponsored free flu shots left at room temperature last month instead of being refrigerated turned out to have “no safety problems.”

The government agencies didn’t go so far as saying they were “safe,” but stressed that investigations showed “no changes” in the vaccines’ quality even if they were left at 25 degrees Celsius (77 degrees Fahrenheit) for 24 hours — though health guidelines dictate they should be stored at temperatures between two and eight degrees Celsius.