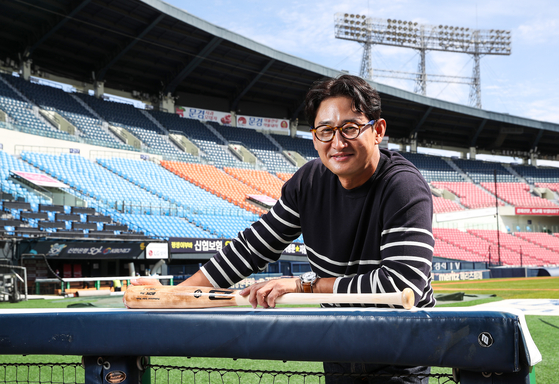 Park Yong-taik of the LG Twins poses for a photo at Jamsil Baseball Stadium in southern Seoul on Sept. 23. [WOO SANG-JO]


After 30 years of baseball, LG Twins veteran Park Yong-taik is ready to retire.

Having started playing baseball in 1990, in the third grade of elementary school, 41-year-old Park is now nearing the end of the very last season of his career.

Park re-signed a two-year contract with the Twins ahead of the 2019 season, saying “I’ll retire after the 2020 season.” As players get older, not many have the luxury of choosing when they retire. Retiring this year allows Park to leave the baseball field exactly 30 years after he first picked up a bat.

Being a good enough player to choose when you retire — rather than just slowly fading into the background — is a double-edged sword. Park got to choose when he would bow out, but he has had to play this season with that finish date hanging over him.

“Since I get sad, I try to spend the rest of the days thinking that this isn’t the end,” Park said.


Although it could be depressing to think about quitting, in terms of regrets, Park said that he doesn’t have any.

“A number of people around me ask me if I have ‘regrets,’ but honestly, I’m fine retiring right now,” Park said. “Since the day I started the sport, baseball has exhausted my body. I’m pretty sure there aren’t that many people who have swung a bat more than I have, anywhere in the world.”

Park is now the oldest player in the KBO, but looking at his condition and his performance, he’s just as solid as anyone else on the Twins roster.

Aside a brief absence from the Twins roster due to injury earlier this season, he is nearing the end of yet another strong performance. After appearing in 82 games, Park has a .299 batting average with 34 RBIs, two home runs and 60 hits this season. Park normally appears as pinch hitter or designated hitter.

Having joined the KBO in 2002, Park has managed to maintain an impressive career batting average at .308 with 2,499 hits and 213 runs over 2,221 games as of 6 p.m. on Tuesday. By the time the newspaper is published, Park may well have become the first person in KBO history to get 2,500 hits.

Park holds the crown for career hits in the KBO, with the closest active player nearly 300 hits behind him. 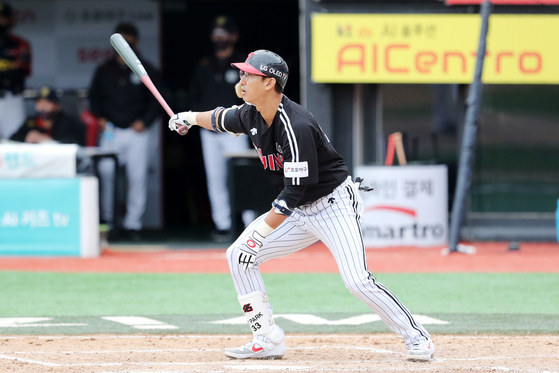 Park Yong-taik watches a hit during a game against the KT Wiz at KT Wiz Park in Suwon on Oct. 4. [NEWS1]

As well as his strong bat and obvious longevity, Park is also known for his distinctive glasses. Although he got Lasik surgery back when he was in college, he still wears glasses during games to see the baseball better.

“I think I have about 120 pairs,” Park said. “I wear them depending on the situation and the timing. I got the surgery when I was a senior in college, so I don’t have any problem in my daily life. But I still wear them, hoping they could help me a little bit more [in baseball].”

This season, there has been some controversy over Park's farewell tour.

Originally, the Korea Professional Players Association planned on holding a farewell tour for Park, with events planned for his last game at each stadium. The idea didn't go down well with fans, considering the ongoing coronavirus pandemic and social distancing guidelines, and Park ultimately turned down the offer.


“For other players, I hope their farewell tour goes through with celebration,” Park said at the time.

Park's official farewell tour may not have gone ahead, but that hasn't stopped each team congratulating him with flowers, gifts and messages at the end of away games.

Park is one of the very few players in the KBO to have played his entire career for one club, the Twins.

“I should really thank manager Kim Ki-tae because this isn’t something that can be done by my own will,” Park said. “At the time, there were eight clubs and I got drafted by LG, my favorite club. And I got to retire from this team.”

Having gone through multiple managers and coaches, when asked about the best teacher he’s had, Park chose batting coach Kim Yong-dal, who served as the Twins’ batting coach from 2007 to 2009 and currently serves as the Samsung Lions’ batting coach.

The two had differences in their philosophy in batting and argued a lot, but that conflict helped Park perfect his batting.

“Back in 2007, I was ranked about fifth among batters in terms of WAR,” Park said. “But coach Kim didn’t give up. If a player disagreed with a coach that often, then a normal coach wouldn’t use me. But coach Kim Yong-dal didn’t do that. When I struggled, he apologized to me by saying that he picked on me to make me a better player and offered to help me when I felt comfortable. [After that,] all the stuff coach Kim said was blended into my swing and that led to good results.”

Park also chose 2008 as the hardest season of his career. For the first time in his career, Park failed to appear in 100 games or more that season and finished with a .257 batting average.

“There were a lot of great players on our team,” Park said. “I wasn’t one of them but ahead of the 2009 season, there were a lot of expectations that I wouldn’t make the starting lineup. I had good stats that season. It was the moment when I gained confidence.”

Through his experience, Park created his own routine and timing when at bat. Along with that, the analysis system the Twins provide to the players helped him read the opposing team’s starters.

He may have had his ups and down throughout 19 years in the batting box, but there’s still one thing that Park hasn't experienced. In his rookie season in 2002, the Twins finished runner-up in the Korean Series. Since then, the Jamsil club has struggled to make it to the Korean Series.

The last time the Twins won the Korean Series was back in 1994.

“[Back when I was being criticized about my farewell tour,] there was criticism that we were the team with the most fans but didn’t win,” Park said. “I admit that. There’s nothing more important than a win to a player.”

For that reason, Park’s last wish is to finish his career on a high note by helping the Twins win the Korean Series. The chances of that are looking increasingly slim — as of Tuesday, the Twins are in fourth place with just a couple of weeks left to play. If nothing else happens, the Twins will face at least two playoff rounds ahead of the Korean Series.

Since Park is set on retiring after the 2020 season, for now, the very first thing he says he wants to do after his retirement is to eat and rest.

“Honestly, I wanted to head over to the United States and go through [coaching classes],” Park said. “But the situation doesn’t look good. I’ve been getting offers to appear on a number of TV shows so I’m going to give that a try. From commentating, I want to try doing everything related to baseball, because I don’t know what I’m good at yet. I think this is the real start to my life.”