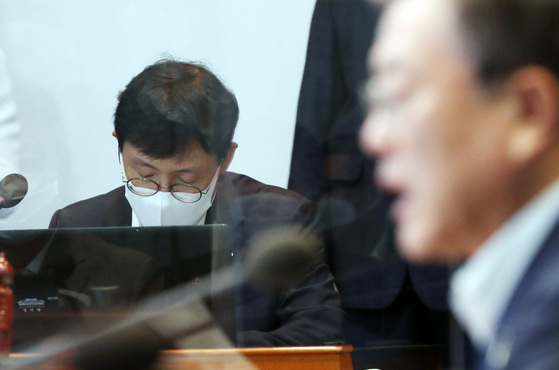 The Blue House expressed confidence on its handling of the economic crisis created by the Covid-19 pandemic, citing the rating from international rating agency Fitch.

“Korea’s credit rating by one of the world’s three credit evaluation agencies Fitch is the same as that of Britain and France,” Lee said. “China and Japan are two levels lower.”

The Blue House senior secretary especially noted that Fitch keeping Korea’s credit score unchanged is significant when so many countries around the world saw their own ratings lowered as a result of the impact caused by the coronavirus.

“In the last nine months since the coronavirus started to spread, 107 countries saw their credit score lowered or likely to be lowered,” Lee said. “It is meaningful that an international body has reaffirmed the external credibility on the Korean economy.”

Fitch on Wednesday in its ratings report noted that its ratings are based on the “robust external finances, steady macroeconomic performance and sufficient fiscal headroom,” amid the coronavirus pandemic and geopolitical risks related to North Korea as well as challenges from the aging demographic and “moderate” productivity growth.

“The pandemic has weighed on economic growth and public finances, but domestic control of the virus accompanied by a robust policy response have limited the severity of the deterioration in these metrics relative to other advanced economies and ‘AA’ peers,” the Fitch report noted.

While noting the fiscal deficit widened from 0.6 percent of GDP in 2019 to 4.4 percent this year, it said Korea’s fiscal deficit is relatively smaller than the AA median’s 8.6 percent.

“A record of prudent fiscal management has provided Korea with near-term fiscal space from a rating perspective to deploy stimulus measures,” the report added.

The agency projected the Korean economy will contract by a “modest” 1.1 percent this year, noting that the AA median is 7.1 percent contraction.

It added that a gradual recovery is expected in the second half of this year and will continue next year.

Fitch projected the Korean economy to expand 3.7 percent in 2021.

“A continued recovery in exports will benefit growth and bolster domestic investment,” the report noted.

The Korean government in June projected economic growth for this year at a 0.1 percent increase, a revision from the 2.4 percent growth projected in December last year.

However, other institutions including the government’s own think tank predicted the economy will face negative growth.

The Bank of Korea in August forecast the Korean economy to decline 1.3 percent, the lowest growth in more than two decades. The state-owned Korea Development Institute last month changed its projection to a 1.1 percent fall.

The OECD also lowered its growth projection to negative 1 percent.

“When combing this year’s growth with next year’s, Korea will likely have the sharpest growth among OECD member countries at 2.1 percent,” the Blue House secretary said. “Turkey will follow with 1 percent, the United States with 0.2 percent and Germany with minus 0.8 percent.”