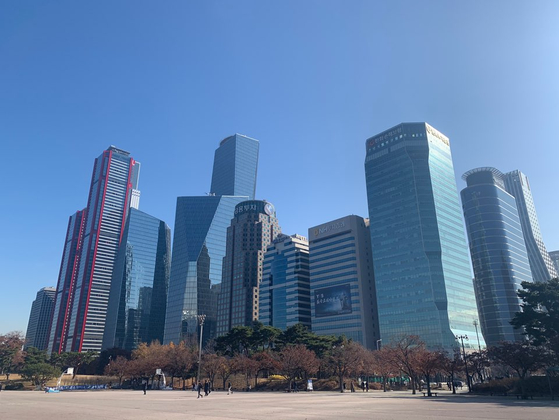 According to ShinYoung Asset, a real estate service firm, the transaction volume of office buildings in Seoul and Bundang, Gyeonggi, that are over 3,300 square meters (35,521 square feet) came to 4.54 trillion won ($3.9 billion) in the third quarter of the year, a nearly twofold jump compared to the previous quarter. The third quarter’s figure was even more than the total transaction volume of the first half of the year’s 4.1 trillion won.

Just three times in Korea's history has the total transaction volume of office buildings exceeded 4 trillion won in a single quarter — this being the third.

The prices of office buildings are also increasing rapidly.

The average price of office buildings was 24.07 million won per pyeong in the third quarter of the year, a 15 percent increase compared to the first quarter. A pyeong is 3.3 square meters.

Competition to buy The Pinnacle Gangnam in Gangnam District, southern Seoul, is heating up. A Singapore-based real estate firm submitted a bid of around 34 million won per pyeong. Should the firm succeed with its bid, it will break the record for the most expensive office building in Korea.

The prolonged pandemic and the government’s tightened real estate regulations are the major reasons behind the recent rising popularity of office buildings.

With travel restrictions in place due to the coronavirus, people who have been purchasing overseas real estate have turned their eyes toward the domestic market. However, investors are facing a shortage of opportunities, as hotels and retailers have lost popularity amid a sharp drop in the number of foreign tourists to Korea.

Those investors are now betting their money on office buildings. As the government announced that it would consider officetels a type of real estate and collect taxes on them, office buildings have become an alternative for the investors looking to evade the taxes.

Choi also added that many companies are downsizing amid financial difficulties, adding significantly to the number of office buildings up for sale.