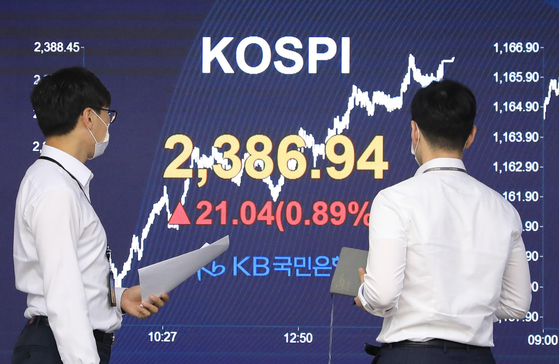 A screen shows the closing figure for the Kospi in a dealing room at KB Kookmin Bank in the financial district of Yeouido, western Seoul, on Wednesday. [NEWS 1]


Shares extended their winning streak to a sixth session Wednesday as U.S. President Donald Trump kept hopes for a stimulus package alive after postponing negotiations for the deal. The won rose against the dollar.

The index got off to a weak start, tracking overnight losses on Wall Street after U.S. President Donald Trump pushed back talks with the Democrats for a stimulus plan until after next month's U.S. presidential election.

The local index ended higher as investor sentiment improved after Trump later urged Congress to approve support for airlines and small businesses and said he would approve a stand-alone bill for stimulus checks.