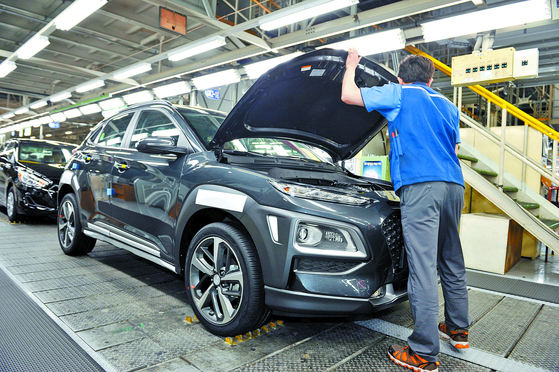 An employee at Hyundai Motor's Ulsan 1 Plant looks inside a Kona vehicle at the production line.[HYUNDAI MOTOR]

The relatively minor infraction and corresponding punishment made headlines as the automaker's notoriously hardline labor union said that it would not intervene. Last month, the company's management and labor union agreed to freeze wages for the first time in 11 years.

Hyundai Motor has been adamant about its zero-tolerance policy regarding slacking at production plants.

Recently, it was reported that workers were caught relegating the bulk of tasks to a few workers while the rest were idle during work hours. For instance, one person was told to do tasks that should be done by two and sometimes even three people. That practice can obviously lead to flaws in production and is a violation of workplace rules.

About 50 employees from both labor and management received punishments including suspension and wage cuts. The labor union did not fight the punishments.

Hyundai Motor in July took disciplinary action against around 300 employees who left the production site early before finishing their shifts by giving them wage cuts. There were instances where employees left work to go fishing during work hours. The company’s stance is that it will no longer stay silent about clear violations of office rules.

Last year, the company faced a slew of criticism after some employees were caught using the wireless network to watch YouTube videos. Management ultimately turned off the Wi-Fi, but they had to fight the labor union every step of the way.

This year, the labor union has agreed that Wi-Fi access should only be permitted during breaks.


While the automaker has traditionally struggled to hand down punishments because of the powerful labor union, this year the union has struck a much more conciliatory tone.

“I feel embarrassed. The negative attention the employees attracted by violating the rules right after wage negotiations is causing harm to the labor union as a whole,” said a member of Hyundai Motor’s labor union. “It is such a pity that the violation occurred at a time when we should all work for the future of the members of the union, especially after the announcement of joint declaration between labor and management.”

GM Korea union to continue to strike over wages