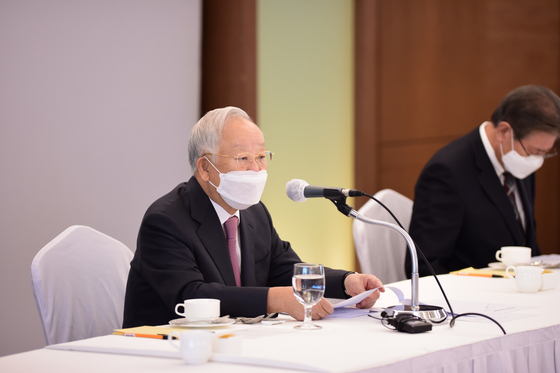 
The Korea Enterprises Federation (KEF) will submit an appeal letter to the National Assembly this month to express concern over a package of bills aimed at tightening scrutiny over big corporations.

The announcement came a day after ruling party leader Lee Nak-yon met with business leaders and refused to delay or make adjustments to the proposals.

The lobbying group representing conglomerates convened a high-level meeting on Wednesday with representatives of its member companies including Samsung Electronics, Hyundai Motor, Hanwha Solutions and Doosan to discuss ways to challenge the passage of the legislation.

The KEF says that more than 200 bills pending at the National Assembly will hamper business activities.

“In response to the 200 bills deemed to pressure companies, the KEF will send a comprehensive appeal letter to the National Assembly in October and convey our stance to the related committees,” the federation said in a statement.

It also vowed to make a concerted effort with other business associations to counter the passage of the bills in question.

One of the controversial bills would allow shareholders of a parent company to file a lawsuit against an affiliate when they hold more than 1 percent of the shares issued at the parent company.

Sohn Kyung-shik, chairman of the KEF, said at the meeting that the two revisions will likely make companies susceptible to attacks by activist funds with speculative intention.

“It runs the risk of bringing speculative forces both at home and abroad to the board and exposing key technologies and trade secrets,” Sohn said.

Sohn also voiced concerns with legislation to expand the legal scope of class-action suits and punitive damage awards, citing it as the most urgent issue to be resolved.

“[The proposals] could raise the possibility of ill-intentioned consumers lodging numerous lawsuits, which will ruin the reputation of companies and cause enormous irrevocable financial loss,” the chairman said.

The Ministry of Justice made a preannouncement of the bills last month.

One aims to extend compensation from a class-action suit with more than 50 plaintiffs to nonplaintiffs if those people have been similarly affected by a situation.

The other is intended to make punitive damage claims easier. Current laws allow punitive damage suits if products cause damages. The new bill will hold companies liable for actions or activities.

Companies could be sued for damages if they act “in an antisocial manner,” according to the legislation, which could include distribution of fake news.