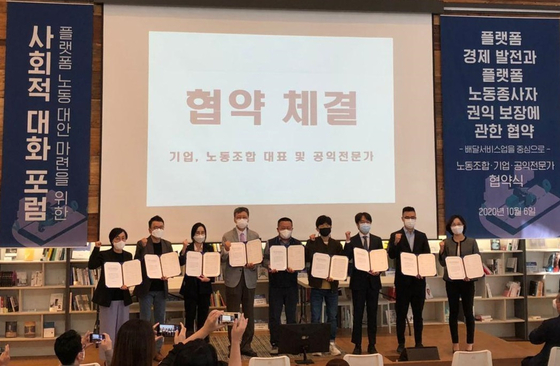 
Unions representing delivery drivers and some of the top companies that employ them on Tuesday inked an agreement to provide labor protections to those workers — a first for Korea's gig economy.

The focus now rests on whether the agreement will be sufficient to protect delivery workers who were previously left out of the system due to their unique contracts and work patterns.

Operators of Korea’s food delivery apps and groups representing delivery workers signed the deal at a forum held Tuesday in Jung District, central Seoul. Woowa Brothers of Baedal Minjok and Delivery Hero, the operator of Yogiyo and Baedaltong, were present, along with start-up delivery companies including Spidercraft, and the Korea Startup Forum, a network of entrepreneurs. Representing laborers, the Rider's Union and the union of service workers under the Korean Confederation of Trade Unions also participated.

"Today's agreement was made possible as those involved in the industry and experts agreed to come together to discuss how we can protect this new form of labor, and not repeat the past when we spent 20 years on wasteful debates over how to define workers under special contracts," said Lee Byeong-hoon, a sociology professor at Chung-Ang University and the leader of the forum.

"We hope the voluntary agreement starts a new wave of change which will open a cooperative ecosystem for all parties in the industry." 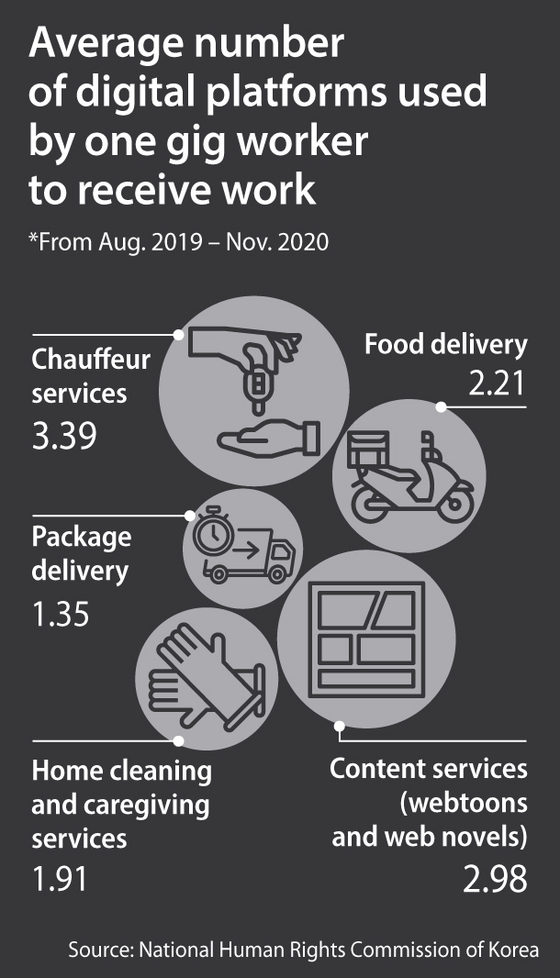 The agreement represents the first time companies and labor created measures to protect so-called "gig workers," a type of employment newly introduced with the development of IT and digital platforms. Such workers are not protected by existing social safety nets, and the results have been constant legal disputes over whether delivery service employees meet the definition of "workers" under Korean labor laws.

The agreement allows delivery workers to receive the minimum protections provided to other workers under Korean law.

“While people who are legally defined as wage workers will be protected by law, the industry has stepped up with the agreement in a bid to protect those who fall through the cracks,” said Chang Ji-yeun, a senior research fellow at the Korea Labor Institute.

A labor contract will be made mandatory and delivery workers will have ownership over their working hours and work locations. Delivery apps will be obliged to inform delivery workers exactly how the workloads are distributed. Platform operators will encourage workers to sign up for occupational health and safety insurance. The agreement also requests that operators abstain from rushing delivery workers.

“This is the first voluntary written agreement made between businesses and laborers from the private sector. We hope this can help protect their rights and safety,” said Kim Beom-joon, CEO of Woowa Brothers.

While meaningful, only three platforms participated in the agreement, which will likely affect around 75,000 workers. Companies that did not participate, such as Coupang Eats, are not bound by the deal.

“Many companies have joined in the movement against all odds, but the agreement should not cause the companies to fall behind others that did not participate. There should be institutional support for companies that pursue mutual growth over others,” said Choi Sung-jin, director of Korea Startup Forum.

Coupang Eats, the food delivery app of Coupang which was absent at the event, said the company “does not demand drivers complete multiple deliveries in a limited time” and is making “voluntary efforts in terms of safety and insurance coverage.”