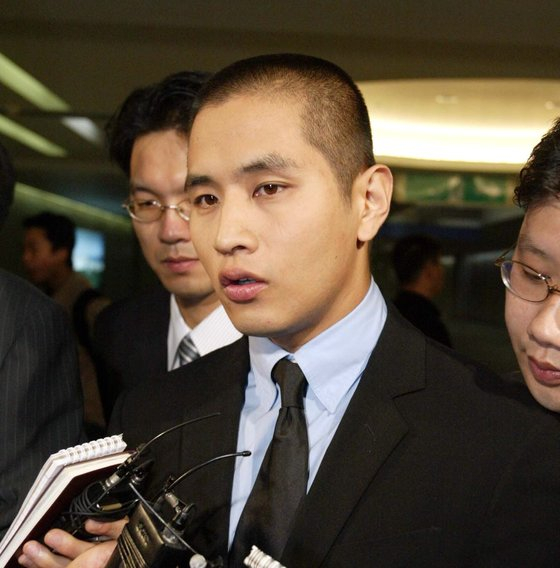 
Korean-American singer Steve Yoo has again been denied a visa to return to Korea, despite last year's Supreme Court ruling in his favor, his legal team revealed Tuesday.

Yoo, 43, has been banned from the country since 2002, after the famous singer filed for U.S. citizenship in January that year to avoid serving his two-year mandatory military service in Korea. He is also known as Yoo Seung-jun.

In October 2015, Yoo filed a lawsuit against the Korean Consulate General in Los Angeles after it refused to issue him an F-4 visa, commonly referred to as an overseas Korean visa.

After an arduous legal battle, in July 2019, the Supreme Court rejected an appeals court's prior ruling that had banned Yoo from returning to his home country, and remanded the case back to the Seoul High Court. The top court said that the consulate was "not exerting its discretionary power" in denying a visa to Yoo based on a decision by the former justice minister.

The Seoul High Court in November 2019 reversed its earlier verdict, opening the door for Yoo to return to the country for the first time in 16 years.

In March this year, the Supreme Court again upheld a lower court decision in favor of Yoo.

However, on July 2, the government again rejected Yoo's application for a visa for evading military service in the past.

The government argued that allowing Yoo into the country would violate the Overseas Korean Act by infringing on the maintenance of national security, public welfare and order.

“The Korean government’s rejection of issuing an entry visa for Yoo is contrary to the principle of proportionality and is an excessive punishment, counter to the Supreme Court decision," the legal team said in a statement.

Yoo’s lawyers earlier this week filed a lawsuit against the Korean Consulate General in Los Angeles with the Seoul Administrative Court.

The legal team said Yoo's response after his second visa application was rejected was, “I will now give up returning to Korea,” but that they urged him to fight to the end.

Yoo was one of the hottest music stars of the late 1990s and the early 2000s, but his career collapsed when he claimed to be too ill to complete his compulsory military duty in 2001 — and then avoided it entirely by renouncing his Korean citizenship in 2002 and attaining U.S. citizenship.

Public backlash was fierce, particularly because the singer had stated in various interviews that a “Korean man should perform his military duties.”

By law, all able-bodied men have to serve in the armed forces for around two years before the age of 38.

The Supreme Court decision notes that under the Immigration Control Act, even foreigners who commit far more extreme crimes requiring imprisonment are restricted from entering the country for a maximum of five years. The court added that there was no legal basis for banning the entry of an overseas Korean for an indefinite period of time.

“The Supreme Court decision ultimately found that the restrictions on Yoo were excessive and that he should be allowed to enter [Korea]," said Lee Hyun-gon, a former judge and a lawyer who is representing Yoo. "The government passed the responsibility to the courts, taking into consideration the public sentiment.”

The Foreign Ministry and Justice Ministry claim that the Supreme Court ruling is only binding for the 2015 case. The government has claimed that when the case was remanded, there was no separate decision on the principle of proportionality, and said that the visa issuance will be decided after a review of discretionary power and in accordance with the law.

“Yoo is the only case in which an individual who acquired the nationality of another country and became a foreign national has been banned entry indefinitely for evading military service," Lee said.

His legal team pointed out that Yoo “was a star 20 years ago and neither a terrorist nor a chaebol,” who endured “all sorts of criticism and derision for 18 years and is thoroughly regretting the choice he made in the past.”

They added, “We want to ask the government, does his return to the country truly endanger the maintenance of national security and public order, or damage Korea’s interests?”