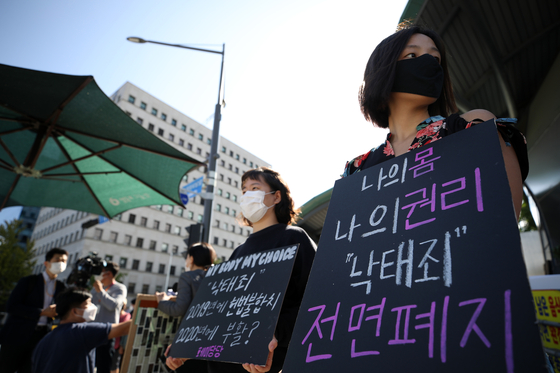 Protesters demand a complete lifting of a ban on abortions outside the National Assembly on Wednesday. Earlier in the morning, the government proposed to partially lift the ban. [YONHAP]


The government announced a plan to lift Korea’s decades-old ban on abortions — but only partially.

The Ministry of Justice and Ministry of Health and Welfare announced a plan Wednesday to revise laws to allow abortions during the first 14 weeks of pregnancy. Abortion up to 24 weeks will be allowed for reasons such as health issues and unwanted pregnancies from rapes.

The ministries said they will change the Criminal Act and the Mother and Child Health Act in response to a landmark ruling by the Constitutional Court on April 11, 2019, saying the abortion ban, introduced in 1953, was unconstitutional because it infringes upon pregnant women’s right to self-determination by assigning absolute priority to the protection of fetuses.

The court said two articles in the Criminal Act that punish both a mother and doctor for abortions are unconstitutional and the National Assembly must revise them by Dec. 31, 2020. If no revision was made by the deadline, the abortion ban will automatically lose its legal effect starting Jan. 1, 2021.

Exceptions are noted under Article 14 of the Mother and Child Health Act. It says an abortion is allowed with the consent of the pregnant woman and her spouse if one of them suffers from any genetic mental disability or disease. Abortion is also allowed in cases of rape or incest or if the pregnancy threatens the health of the mother.

On Wednesday, the ministries said they will revise the two laws. According to the proposed revision of the Criminal Act, abortions during the first 14 weeks of the pregnancy will be legal.

Starting from 15 weeks till 24 weeks, abortions will be legal for the reasons already allowed.

In addition, the government plans to allow abortions up until 24 weeks of pregnancy if a mother proves special social or economic reasons that requires termination of the pregnancy. In these cases, counseling and a 24-hour period to consider the decision are mandatory.

But abortions will continue to be illegal in Korea from the 25th week to the end of a pregnancy. And restrictions on abortions from the 15th to 25th weeks are guaranteed to be rejected by women's groups and liberal politicians.

Among other changes, the requirement of spousal consent will be removed from the law.

The revision of the Criminal Act will stipulate that only a doctor is legally allowed to perform an abortion. Because abortion was illegal, there was no law saying that only doctors could perform them. Illegal abortions were performed by doctors or unqualified people without medical license.

But according to the plan, the government intends to widen the medical options for abortion. Use of abortion drugs, currently banned, is proposed.

The government also wants to guarantee a doctor's right to refuse to do an abortion based on his or her personal beliefs. After rejecting a mother’s legitimate request for an abortion, however, a doctor would be required to offer advice to guarantee her access to the procedure.

After announcing the proposed changes, the government will submit the bills to the National Assembly. For the next 40 days, lawmakers will canvas for feedback.

The government said it wants the National Assembly to revise the laws before the end of this year— the deadline issued by the Constitutional Court.

After the revision plans were announced, women’s rights activists expressed outrage. “This is not an advancement,” Dr. Goh Gyeong-sim, director of the Physicians for Humanitarian Action, said. “It not only fails to reflect what women want, but also infringes upon women’s right for self-determination. This is actually a backward step in terms of human rights.”

The Korea Women’s Associations United, an alliance of 28 women’s rights groups, said it will start a national campaign against the plan. “We think protesting the planned revisions is an extremely urgent matter,” a leader of the alliance said. “We will hold press conferences nationwide and announce a statement to start protests.”

A lawmaker in the ruling Democratic Party (DP) also criticized the proposal. “This actually legitimizes criminal punishments of abortion despite the ruling of the Constitutional Court,” said Rep. Kwon In-sook of the DP. “It is a historical regression.”

Kwon said she will sponsor her own versions of revision bills to completely lift the abortion ban.

Because of the sensitivity of the matter, no lawmaker has submitted revision bills to follow up with the Constitutional Court’s ruling, forcing the government to draft bills to change the laws before the deadline.

Members of the Justice Party, a more progressive party, said they will prepare bills to ensure that an abortion will no longer be a crime in Korea.

Doctors also expressed concerns. “There can be a case in which a fetus cannot survive after 24 weeks of pregnancy,” Dr. Kim Dong-suk, head of the Korean College of Ob & Gyn, told the JoongAng Ilbo. “The government should consider that and also other possible cases.”