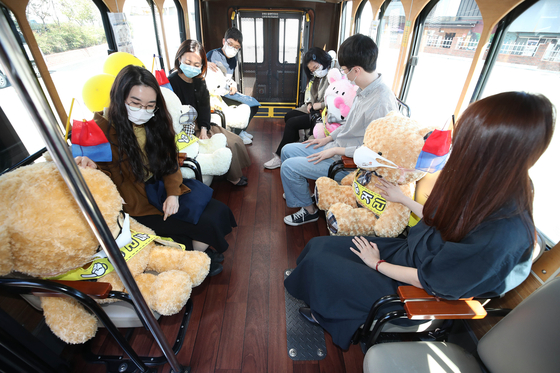 Stuffed dolls are placed on every other seat of a tour bus in Daegu Wednesday to guarantee social distancing among passengers. [YONHAP]

Korea added 114 new cases of the coronavirus Tuesday, snapping back to triple-digit figures for the first time in a week as clusters sporadically emerge nationwide after Chuseok. Of those cases, 94 were domestic infections and 20 were imported, the Korea Disease Control and Prevention Agency (KDCA) said Wednesday morning. There were 75 new cases Monday.

The vast majority of Tuesday’s caseload was from the greater Seoul area: 49 in Gyeonggi; 29 in Seoul; and five in Incheon. The rest consisted of six cases in North Jeolla, two each in Busan and Daejeon and one in Daegu.

The last time Korea saw a three-digit increase in daily coronavirus cases was Sept. 29, when 113 people were diagnosed. 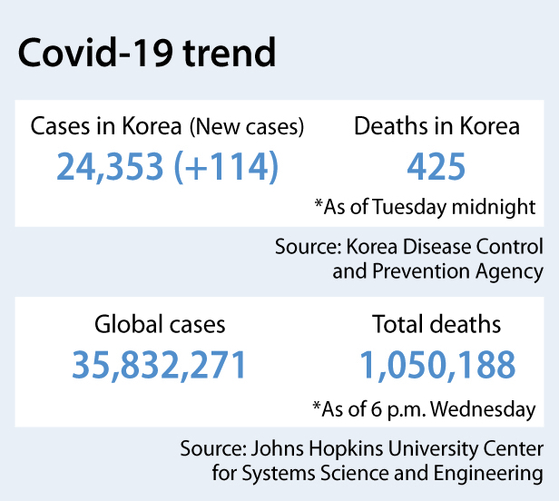 Most new cases in Gyeonggi were traced to a hospital in Uijeongbu, where 26 people received positive test results Tuesday and at least three did on Wednesday, health officials said. Of the total 29 cases, 13 were hospitalized patients, 14 are their caretakers and two are nurses.

How the virus entered the facility has yet to be explained. But officials said most infections came from people on the fifth floor, which is now locked down and under isolation.

Twelve other patients in Gyeonggi who were diagnosed Tuesday — nearly one in four new infections in the province — were categorized as untraceable, meaning epidemiologists don’t know how or where they got infected.

Despite rising caseloads, several right-wing civic groups refused to roll back their plans to protest against President Moon Jae-in on Friday in downtown Seoul in time for Hangul Day, a national holiday celebrating the invention of the Korean alphabet.

Police have been rejecting protest permits on the grounds that the Seoul Metropolitan Government bans any rallies in the city involving 10 people or more. The Seoul government also designated no-rally zones in many parts of downtown Seoul, including Gwanghwamun Square, where even rallies involving fewer than 10 people are prohibited.

In response, an iconic conservative group that orchestrated a large-scale rally in Gwanghwamun on Aug. 15, Korea’s Liberation Day, said Wednesday that it formally asked the Seoul Administrative Court that morning to suspend authorities’ ban on its protest plans for Friday.

A court decision is expected to be made Thursday. The group has relayed plans to gather 2,000 protesters around Gwanghwamun Square.

Choi In-sik, the group’s secretary general, denounced the police and Seoul Metropolitan Government in a public statement for blocking rallies, asking why their outdoor demonstrations were being banned when floods of people were gathering in Seoul Grand Park and Jeju International Airport each day.

Choi accused the Moon administration of “oppression,” and said his group filed an administrative suit to guarantee its freedom of association and assembly.

Among Tuesday's imported cases, six were from Uzbekistan, three from Kazakhstan, two each from the Philippines and Uganda and one each from Russia, Myanmar, Japan, Malaysia, France and Malta.

Three patients died Tuesday, bringing total deaths to 425, while 251 patients recovered, raising total recoveries to 22,334. As of Tuesday at midnight, Korea had counted 24,353 Covid-19 patients in all.

Who wants a socially-distanced wedding anyway?