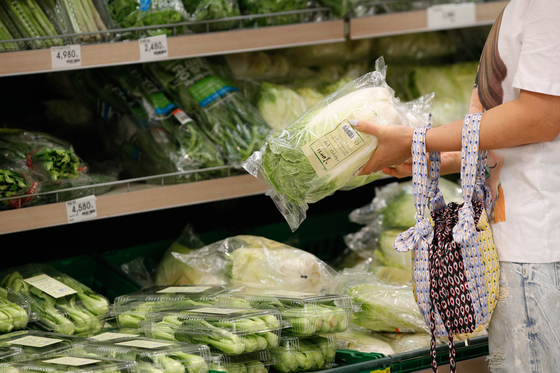 A customer holds a head of napa cabbage at a supermarket in central Seoul. According to the Korea Agro-Fisheries & Food Trade Corporation, the price of napa cabbage is about 10,689 won ($9.28) per head as of Oct. 7, a 40 percent hike compared to a year earlier. [NEWS1]


Mrs. Kim, 62, who lives in Mapo District, western Seoul, was shocked recently to see the sky-high prices of napa cabbages at her local supermarket.

Ahead of kimjang season (the annual kimchi-making season), Kim visited the supermarket to buy ingredients for making kimchi.

Kim said it costs over 200,000 won ($170) for 20 heads of napa cabbages, the main ingredient in kimchi. Combining all the ingredients that are needed to make kimchi — including other vegetables, fruit and dry ingredients like red pepper powder — it costs Kim at least 500,000 won.

“I’m not sure if I really have to kimjang this year when I should have to pay lots of money,” Kim said. “Maybe I should just buy kimchi at the supermarket or cook kimchi jjigae [kimchi stew] less.”

The rising price of vegetables has increased the financial burden on Koreans who are already eating at home more often due to the prolonged Covid-19 pandemic. 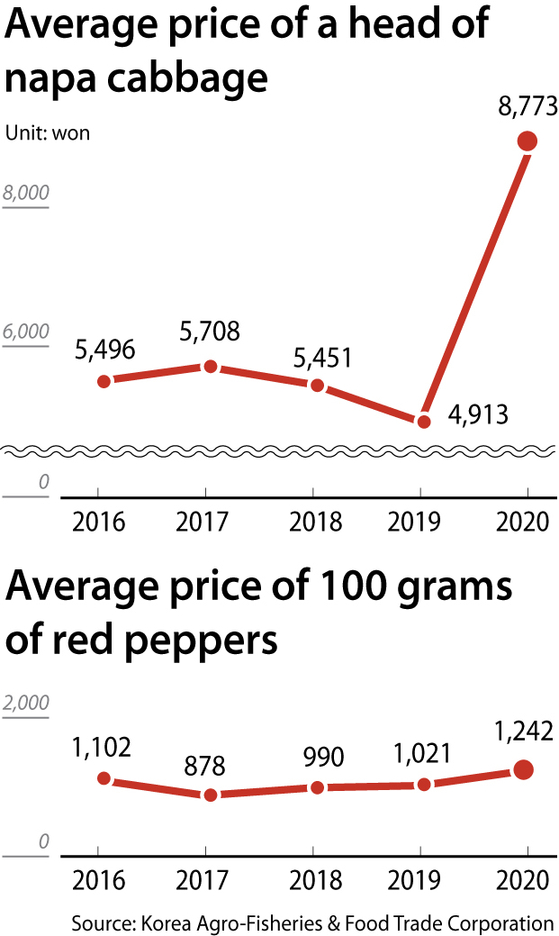 The price of 1 kilogram (2.2 pounds) of green onions is around 7,623 won while that of a kilogram of red pepper powder is about 32,895 won, all up by between 30 percent to 70 percent compared to a year earlier. Other items such as onion and garlic have seen prices rise.

This summer’s unusually long rainy season, which lasted about 54 days, and multiple typhoons are the major causes of the recent hike in vegetables prices.

In Korea, farmers generally grow napa cabbages four times a year. Cabbages to be harvested in time for kimjang are planted in July.

“Due to the frequent rain, cultivation areas for napa cabbages have shrunk. The number produced declined by 6.6 percent due to the weather conditions,” said a report by the Korea Rural Economic Institute (KREI).

Due to the sky-high vegetables prices, many Koreans are rethinking the annual kimjang.

A full 48 percent of customers who have made kimchi every year said they would reduce the amount of kimchi they make this year, according to the KREI. Of them, roughly 83 percent said “costly cabbages” were the major reason.

Restaurants who usually serve kimchi as a side dish are also struggling to adapt.

“We usually serve kimchi and seokbakji [radish kimchi] as side dishes,” said the owner of a gukbap (rice served with soup) restaurant in Yeouido, western Seoul. “However, these days, we either serve only one or none at all as long as customers request it.”

Food company Daesang’s online shopping mall recently sold out of inventory for some of its kimchi products. The company’s famous Jongga kimchi brand has stopped offering a customized kimchi service to customers since last month.

Some kimchi products from CJ CheilJedang's Bibigo brand are already out of stock at the company’s online mall, CJ The Market.

“After Typhoon Haishen ravaged the country in early September, cabbages need at least a month and a half to grow completely,” a spokesperson for Daesang said. “The cabbage supply will likely stabilize as early as the end of this month.”

The price of napa cabbages is expected to decline starting from mid-October. Prices will be less than half of what they are today by November and December, according to the Ministry of Agriculture, Food and Rural Affairs.

It’s that time of the year